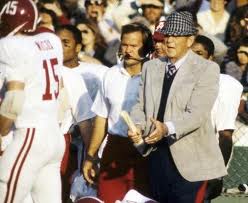 For a time to begin with such magic, newness, and expectations- the end of the 1982 season was a nightmare. When all the momentum has turned into a downward cycle, it seems like nothing can go right.

I never dressed for a varsity game that season. A typical Friday for me was playing in a scrimmage for guys who didn't make the travel squad in what we called 'the toilet bowl'. It was instituted when one of our redshirt players made a decision to go out drinking on a Friday afternoon and was rude to the dining hall ladies when he reported to dinner that evening. We were practicing every Friday after that. But it was real football and, as a QB, it was always fun for me.

My buddy, Lee Clements and his brother ( I can't remember if it was his brother Mike who was in the goal line stand for the '78 championship game or Pat who played at Austin Pea) went camping on the weekend of the LSU game. To my knowledge, that was the first Alabama game I had ever missed. My entire growing up life- I either attended, watched on TV, or listened on the radio every Alabama game. Though it was strange that I was going to miss it, we took off into the wilderness with no radio. We had a great time hiking and camping- totally detached from all that was going on.

When we turned on the car radio that Sunday after coming out of the woods- it was like listening to the aftermath of a state disaster- the score was LSU 20- ALA 10, but all the accounts were that it wasn't even that close.

When we got back to Tuscaloosa, the dorm had this tense sense of fear. Jeremiah Castille said "He said he should have coached us better- all that means is we are gonna get killed this week."

But there was also a rumor going around that Coach Bryant had alerted the press about retiring.

The darkness was closing in fast and with an unkind fury. Talk radio was still in its infancy, but there were ugly rumors surfacing about all types of things. The most hurtful thing was that someone had started a lie that there was racial tension on the team and that Walter Lewis had been in a locker room fight. The whole rumor was so ridiculous that we laughed- but life has a sense of piling on when things are on a slide.

Coach Bryant took some corrective actions. The next Big Meeting he said, "I'm not going anywhere. I will be here to 80 or 90 if I can keep getting results." It just wasn't delivered with the same swagger and we were still in shock.

No one saw the home loss to Southern Mississippi coming. But we had historically always had problem with an athletic QB. Reggie Collier was unstoppable that day. I still see some of his amazing plays in my memory. We made a late rally to give the home crowd hope, but in the end they beat us at Bryant Denny 38-29.

There wasn't much joy in the compound- which was so different from the normal atmosphere in the dorm. You have to understand what good guys we had on the team back then. Normally, Mike Adcock, Doug Vickers, Mike McQueen, and especially Linnie Patrick were smiles and infectious in their personalities. But we were ALL DOWN.

There were 3 running backs dismissed from the team for attitude problems. But for the most part, there was no rebellion- there was just a sadness that we had let him down.

Auburn week had a different feel.

First of all, we pulled in some of our better running backs for the scout team practice.

It was a week of war! Auburn was running the wishbone as well and we went after our defense and they went after us!

The highlight of the week and maybe my most vivid memory from that part of the season was the last practice. We came out on the field and there was a hall of fame line-up of former Alabama players there.

No one had to introduce them- we knew who they were. I was especially excited to see Lee Roy Jordan, Major Ogilvie, and Joe Namath was in a fur coat! All of these guys gathered together at the end of the practice and took turns talking about the importance of beating Auburn.

The famous ending to all of that goes as follows:

Steadman Shealy: "Y'all know that they think they are gonna beat us this year."
Coach Bryant: "I don't care what those country bastards think."- and he blew the whistle. Practice was over with a roar of laughter.

There were those moments that made you wonder if  the outcome had been ordered.

We stopped Auburn on a fake punt which led to an easy 7-0 lead.

We moved well and pulled back to a 10-7 advantage.

But they got an interception which put them ahead 14-10.

This was the old historic iron bowl- half the crown was orange and blue- half crimson and white. The roar at every momentum change made us all feel goosebumps.

We kicked a FG right before the half to go into the dressing room trailing 14-13.

We scored on the opening drive of the 2nd half but missed the 2 pt conversion- 19-14 Alabama on top.

And then we got what seemed to be the clincher- a Peter Kim FG toward the end of the 3rd quarter- 22-14.

I felt so good then- we had outplayed them and they had just been opportunistic!

But Bo Jackson kept the game within reach. He broke through for a 53 yard run and Al Del Greco pulled the game to 22-17.

With less than 3 minutes left, Randy Campbell threw a pass toward Chris Woods and Jeremiah Castille cut in front for an interception!

We erupted in a sea of crimson cheer.....

Only to see the yellow cloth fly from clear across the field and land on the green turf.

Years later, when Jeremiah and I worked together at Briarwood Christian, I asked him if he had ever seen a replay of that play. He said "NO". I said, "Do you think you interfered him?" He said, 'I don't think so". And then he asked me, "What does it look like?"

So the results are in: the ref was an Auburn man!

The call gave Auburn a first down at the 9 yd line.

Time was running down.

When they handed the ball to Bo Jackson and he leaped- if you freeze frame it right there- you will see what amazing defense we were playing on that play.

We actually pushed their offensive line 1 yard back. When we first make contact with Bo, he is a yard short of the goal line!

But this amazing athlete, maybe the greatest of all time- made his greatest high jump ever.

Tommy Wilcox, Stan Gay, and Mike Pitts had given it all they had, but the ball crossed the goal line and Auburn had a 9 year bubble about to burst!

As Walter Lewis was intercepted, the crowd stormed the field and tore down the goal posts.

I watched with a silent realization.... the rivalry was back.

Coach Bryant spoke the truth. "Our team played well- probably the best they played all season. It just wasn't enough."

We were going to have a few days off and begin practicing for the Liberty Bowl.

Though we all knew the rumors going around... no one really could foresee what was about to happen.

Coach Bryant was about to inform the entire world that Memphis, TN would be the sight of his last game as a coach!