What the History Channel Taught Me From "The Bible"

My grandmother was full of great advice. One statement I heard her say on many occasions was, "If you look hard for the bad, you will find it. If you look for the good, you will find that also. My suggestion is to spend more energy finding the good."

I have been disappointed by media portrayals of the Bible before. And who wouldn't have at least a scant of trepidation and suspicion when it was announced that the History channel was presenting the story of God's covenant promise in a 10 hour mini-series?

But everything that has concerned me in the past about portrayals of Biblical accounts did not show up this past Sunday night.


Past Projects have been WAY WORSE!
I get concerned when miracles are disavowed and 'experts' explain how these are tall tales based on natural phenomena:

Examples from Shows in the Past:

Those things bother me...... but NONE of that was present last Sunday night.

I get a tad dismayed that Christians have attacked this presentation.

What piece of artistic depiction of Scripture can capture all the reality? 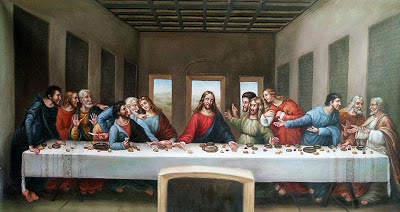 It would be like looking at Davinci's painting, The Last Supper, and scoffing, "That's not how the Bible describes it! No way the room and building is a realistic depiction."

Series producer, Mark Brunette, who has advocated a strong Christian testimony and a 'Bible Believing Follower of Christ' spoke of his motivation in taking on the task:


Burnett said he believes there's a growing "Biblical illiteracy" among young people.
"It's like saying you never heard of Macbeth or King Lear," he said. "In school, you have to know a certain amount of Shakespeare, but no Bible. So there's got to be a way to look at it from a pure literature point of view. If it wasn't for the Bible, arguably Shakespeare wouldn't have written those stories."


I gave it my heartfelt endorsement as soon as I heard the grand lead in after Noah was telling his children the Genesis narrative (though you won't find that event in the Bible)- before a billion people can start believing in God, He starts with one man and begins the narrative with Abram's Call and the institution of the Abrahamic Covenant. The Creator God is a Covenant keeping God- I can live with that view all day long.

I am even more encouraged by the fact that liberal Christians don't like it. Take this section from an article PRN Newswire (Yahoo News):

The History Channel's miniseries "The Bible" distorts the Bible's original spirit, and does a disservice both to history and to the Bible, according to Bible scholar Dr. Joel M. Hoffman. The problem, he says, is that only some Bible stories were originally intended as history, while others, including most of Genesis, were meant to be fiction. "The Bible," the first episode of which aired Sunday night, wrongly "paints the Bible with a single brush," Hoffman claims. Hoffman's analysis and review appear in a Huffington Post piece entitled "The Bible Isn't The History You Think It Is."
Hoffman's point isn't that only some of the Bible's stories happened (though he writes that that's "almost certainly true"), but rather that the Bible itself portrays the stories differently, "only presenting some of them as having happened." He compares the case to a newspaper, with its news, opinion, analysis, comics, etc. "The news can be accurate," he writes, "even if the comics are not. The same is true for the different parts of the Bible."
Hoffman argues that "The Bible" miniseries is like a combination of "a newspaper's news with its comics."

If the History Channel produced a program that Dr. Hoffman liked, then I would have reason to be upset!

My suggestion is that we celebrate this honest attempt to bring the Bible to a generation that is removed from the reading and knowledge of these stories and pray that they may pay attention to the culmination of this grand narrative- The death and resurrection of Jesus which will surface around Easter!

If you look for the bad in this series- you will find it. 4,000 years of history is difficult to portray in 10 hours of commercial TV.

But don't brag of how good Spielberg's Lincoln movie was or how Chariot's of Fire lifts your spirit. I doubt it is authentic as you are requiring Mr. Brunette to be.