Memories of Coach Bryant- "Running' Into the Bear

It was about this time of year- 30 years ago- that I saw Coach Bryant alive for the last time.

During the break after the Liberty Bowl, I had a lot of thinking to do. I had some decisions to make.

A big problem was my academic performance for that 1st semester- it was a disaster! I had always been an honor roll type of student, but new found freedom and football had taken its toll. My dad hit the roof when he saw the notice that I was on academic probation. It would take too long to list all my excuses- and none of them were that good.

A second issue was what to do about football. My roommate was right, I was never going to be a QB in a pro system- I was realistic to know that it was unlikely that I was going to be a starter anywhere at Alabama.

The newness of being around the big time program was gone and just being on the team didn't really do much for me- no one cared that much- just an ordinary Joe- no real accolades or status.

But I did realize one thing- I loved my teammates! These were some of the most fun, caring, driven for the right reasons guys I had ever been around. Especially the walk-ons at that time. It was our little fraternity.

So right before I headed back to Tuscaloosa- I made two solid commitments- I was never going to be on academic probation ever again and I was going to try and be the best scout team player I could to help our team become as good as it could be. I moved to defense- strong safety- and began the process of getting better.

I had received a letter in the mail while on break that had my winter workouts listed. I was to lift weights every Mon/Wed/Fri at 6AM and report for running on Tues/Thursdays at 2:30 PM.

OH BOY! I'm glad I made my decision to keep playing before winter workouts began- I would have quit the first week had I waited to see how off season conditioning was!

The football season had not really been bad. I mean, yeah, I got beat to death- but playing HS football under David Cutcliffe at Banks was tough and hard... so I kind of excelled in that.

But nothing in my previous life prepared me for what became known as MILLER TIME! Now if ANYONE should have known, it should have been me. I was getting the Al Miller personal training program that whole time I was rehabbing my hamstring. Now I know that he really was 'taking it easy' on me.

Coach Al Miller was staying on with Coach Perkins and you could tell from day 1 that he was personally committed to re-building the program himself. Squats/Power Cleans/Bench/Box Jumps/400's/200's/Lower Gym torture sessions/and 'circuit training' were daily tools to tear us down to lifeless pieces of slime.

I could hardly walk across the quad to my classes after my morning torture!

This is no lie- I woke up one dark morning at around 3:00 AM and began crying! I knew that in 3 hours I was about to do 3x10 parallel squats at 80% of my max, but I was too sore to walk to the bathroom!

Somehow though, we made it. I distinctly remember what Randy Edwards looked like after 8 weeks of Miller Time and realized there was a method in the madness.

So here is how I 'ran' into Coach Bryant. 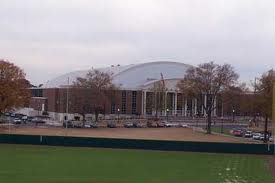 We went out in t-shirts and shorts to run no matter HOW cold it was. But when it rained we had the unfortunate alternative run in the Coliseum concourse. Any time I showed up to the cage to get my workout stuff, I already knew if we were running in the concourse by all the depressed faces among the players.

Running with Coach Miller was almost cruel. He gave us a distance and a time. We ran in two groups line and skill. If one person came in 'late'- even .01 after the deadline, that rep did not count.... for anyone!

But then the big guys would be up and we would begin praying.... because if the linemen were late... we all missed it.

Now, everything that made that bad... made running the concourse worthy of interrogating terrorists. Not only was there a weird distance- 1 lap around the concourse. There was a weird time. But then you add... no lanes... slippery floor... and doors and water fountains... and fire extinguishers.

Let me give you a visual. While I was at Alabama, someone took me to Greenetrack to watch the greyhounds race. Seeing 20 Alabama football players slipping and running around a continuous blind corner, elbowing for life and death- almost dead- was like watching those dogs run and slip and fight to the finish!

And yes! The inevitable did happen.

One day we had just finished what appeared to be our last rep. I was standing there, hands on my head, trying to stay conscious while gasping for air.

Now it was the big boys! Come on guys, you can do this! If they made it in time, we had lived another day!

So they were off. And it was weird because in the concourse, they just disappear around the corner and you just start praying that they will come back in contact within reach of the time. Sort of like Mission Control waiting on the shuttle to get through the atmosphere.

Someone flung the door open right in front of our eyes and a big, massive man (it may have been Hoss, Hardy or Gary Otten) hit the door at full speed. BOOM!

He got up- bear crawled to his feet, sprinted, and dove across the finish line.

And we lined up again.

So here is the last time I saw Coach Bryant. This is my most vivid of all my mental pictures.

We were running the concourse.

There was about 4 of us in the lead, coming full sprint around the endless curve.

The door flew open and out stepped Coach Bryant! He turned quickly. We all slid to a stop!
We almost plowed him over!

And we just stood there for a second. Face to face with the man!

He smiled and we laughed!

He turned sideways and we resumed running.

We missed the time and there was no need to tell Coach Miller why.

But I will tell you this- that image I have of Coach Bryant has always been such a blessing to me. He was tall, smiling, he looked good to me- he seemed so happy!

The last time I saw Bear Bryant alive, I literally almost ran into him!

It was just maybe a week later that we were all going to experience a deep hurt. 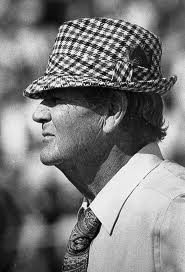 I have some memories about the funeral I want to record- and then I want to relay some stories from other Bama folks who are much more authoritative than I to share some tributes.

On Jan. 26, I will be posting some paragraph type tributes that have been sent in. Please type a short memory and email it to me: jayopsis@gmail.com- you can even make it anonymous. I will publish those on the anniversary date.

I could write more about my time at Bama. With the help of Lee Clements, Scott Connell, Ricky Colbert, Chris Lombardo, Ernest Carroll, and many others... we had a nice run at becoming great scout team players. I am likely never to blog about how Lee Clements and I drove to B'ham to buy Auburn decals to decorate the white helmets for the scout team or how we dressed in orange and hid in the bushes right before practice to jump out and trash talk the starters during practice.

But the Lord was good to me- I made the Dean's list academically almost every semester after that and enjoyed every second I served the football team.

I learned so much about football by playing QB, strong safety, and wide receiver. It all helped me as I started my coaching career.

Thanks for bearing with me- when I saw that it was 30 years approaching- I knew I needed to record some thoughts before they were gone forever!  It was a special time to be at Bama.
Posted by Jayopsis at 1/15/2013 08:57:00 AM

Jay, Every now and again, I pull up your blog and re read these memories and just laugh. I would love to see you put them in a book someday.