Memories of Coach Bryant- The 1983 Funeral

I had gotten where I would tune in to the radio (WUAL) and read the paper more in Jan. 1983- because they were talking a lot about Coach Perkins and the staff he was bringing in.

We all got concerned on Jan. 25 when it was announced that Coach Bryant had been admitted to Druid City hospital due to chest pains.

But Coach Bryant's doctor seemed determined to convey that this was not that serious.

But around 2:30 or so the next day- it was all over the campus. Coach Bryant had passed away from a heart attack.

The reports from that day say that his heart stopped beating at 12:40 PM. He had a previous heart attack 2 years earlier that no one really knew about. They pronounced him dead at 1:30 PM, when nothing seemed to be working. The official cause of death was massive coronary occlusion.

We were called to the Bryant annex the following day. I was beginning to hate that room- we never met there- and now I was party to two days of bad news.

This was a sad, sad time. 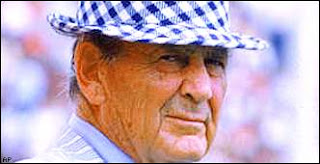 Head trainer, Coach Jim Goosetree- a man I had come to respect and admire so much- was so sad, but his tender care of how he talked to us as men was impressive.

He said that we were all going to be in busses as honorary pall bearers. There were going to be a few players selected as the ones to carry the casket.

He told us to wear suits, look sharp, and that Mrs Bryant had requested that each player carry a clean, white handkerchief in case she needed it.

The players who were asked to carry the casket were: Walter Lewis, Paul Fields, Tommy Wilcox, Mike McQueen, Jeremiah Castille, Darryl White,  Jerrill Sprinkle, and Paul Ott Carruth- all amazing young men in their own right.

There was a memorial service in the Coliseum that night... I have no clue why I did not attend.

I do know I was in quite a scramble to get any kind of suit and tie together- and I drove to Parisian to buy a small box of white handkerchiefs. I took the whole box and offered extras- everybody else did the same thing! I had a handkerchief in every pocket!

On Friday morning, five greyhound busses picked us up. The bus I got on had Coach Mal Moore on the front. He looked so sad. I paused shortly to tell him thanks for all he had done for me because I didn't know if I as going to see him again. Looking back on it- I bet it was a little awkward.

The loop of the ride was symbolic- we went to First United Methodist Church on Greensboro Avenue.
We stood outside on a nice day for Jan.- I kept recognizing famous dignitary after dignitary.

I do know that recorded accounts of the funeral mention that Woody Hayes, Darrell Royal, Bobby Dodd, and Frank Broyles were there. President Reagan sent George Alen to represent the White House.

We got back on the bus and it made a pass by Bryant-Denny stadium.

There were a sea of people everywhere we rode.

From Tuscaloosa to Birmingham- every inch of I-59 including the overpasses had bystanders! They were still, some holding beautiful signs - a lot of tears......

I heard police estimates were in the neighborhood of 750,000 people! Who knows?

I will NEVER see anything like that ever again.

The bus was as quiet as I had ever heard a team bus.

We passed by Legion Field.

The on to Elmwood Cemetery.

Another endless throng of people- this was a State Funeral and Coach Bryant was receiving the royal treatment.

It has been 30 years and I still miss him.

I know he would be happy at how well Alabama is doing under Coach Saban- especially how classy Alabama does it.  I'm hoping to have some others express thoughts on the 26th.

Thanks for participating in this project! 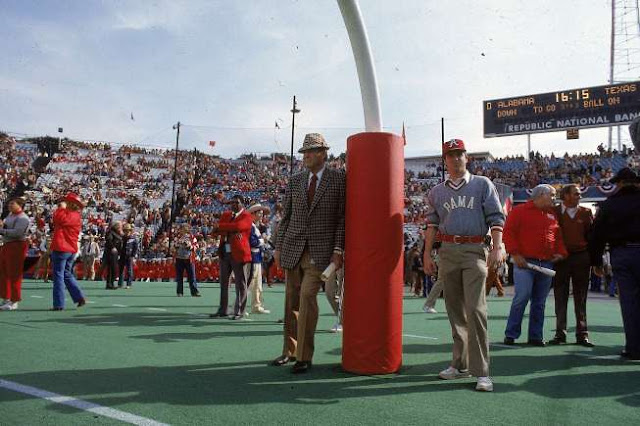