Memories of Coach Bryant- In the Hall 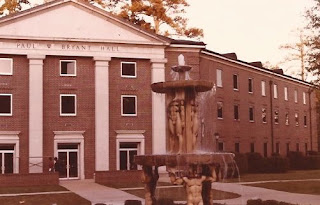 Even though I did not live in Bryant Hall my freshman year- there are so many memories attached to that building.

I did get to move in later and even served as a student dorm assistant Coach Perkins 2nd/3rd year.

But I got to eat there, study there, generally spend hours hanging out in the game room- washed my clothes, etc.

I know all of the arguments for WHY the NCAA got rid of athletic dormitories- but it was a very important piece of Alabama football.

When the NCAA did away with them, it was primarily argued that the NCAA wanted the student athletes to experience college as a normal student would. They were expensive to build and maintain- and some schools just couldn't afford a place like Bryant Hall as a luxury.

The problem with that argument is that no Alabama football player is going to be normal. These well known athletes are going to attract an entourage. Having the players all report to a single place at night was good and limited some of the more negative influences.

Bryant Hall's success began with Coach Jack Rutledge, the 'Guvnor'. He lived in the downstairs apartment opposite the dining hall. Coach Rutledge had a perfect temperament and style for dealing with the unique demands of football players, freedom, and protection.

It started with what he told us from time to time. It wasn't a speech, it was kind of like a dad chat. In the midst of some story or conversation, he would say: "You know Coach Bryant has all kinds of connections in the state. He knows police officers, federal officials, detectives, FBI agents.... and if he is worried about what you are up to, he will have someone follow you. They will know where you went, who you ate with, what kind of choices you are making. He will get a full report when he wants it. My advice? You better act right."

Bryant Hall had an amazing game room for what I had ever experienced. I saw some amazingly competitive pool, ping pong, and foosball games!


The food was incredible as well. The ladies who cooked the meals at Bryant Hall were as close to mom as you might ever get away from home. They knew us, loved serving us, and never disappointed! It was warm food and a smile just when you needed it!

There was something comforting about walking into a safe place, grabbing that tray with a Bryant Hall logo on it, getting southern cooking, and sitting with your team mates and coaches. Just about every player always stopped and prayed. And just about everyone put ketchup on everything.

There was a ketchup routine. It seemed like almost every meal we had a brand new bottle of ketchup on the table. All the players new how to get it flowing. You pick it up, make three or four hard quick circles- pop off the top- and start shaking vigorously. Thom Whitely had a saying, "Shake and shake the ketchup bottle, first none will come and then a lottle!"

There was a problem with this though. Hardy Walker had introduced me to the girl who would later become my wife. And he dated one of my good friends from high school. So we both double dated one night and went to the Red Lobster. Amy Davis (who later became Amy Walker) had on a beautiful white dress!

We sat down, Hardy grabbed the ketchup and did the Bryant Hall swirling motion with all the force that a 280 lb lineman could. The bottle cap flew off and Hardy splattered Amy with gobs of Heinz!

Another great part of eating at Bryant Hall was 10:00 PM SNACKS! They would open the Dining Hall and we came in to loaves and loaves of bread, cheese, chocolate milk and my favorite: a peanut butter/fresh honey mix.

No wonder I went from 185 to 200 lbs in about 6 months! And that type of eating would cost me dearly when I stopped playing football.

While I am on the subject of Bryant Hall, I need to add a few more stories under the Ray Perkin's era.

One night I kept hearing what sounded like a baby crying all night. It was a demon like-eerie howl.

Finally, that morning, I had a hard knock at the door. It was Clif Thomas and I believe,  Kurt Jarvis. "We can't get down for breakfast." At Bryant Hall, everyone had to check in for breakfast- you didn't have to eat- but you did have to wave at the dorm assistant who was tabulating attendance.

I walked out and saw no less than 15 big, strong Alabama football players stuck on the 2nd floor hallway because a big, gray alley cat had gotten in the building and was perched in the oval window midway down the staircase.

This was a BAD cat. I walked toward it and he hissed and swatted at me.

I went back up the steps and woke up Lee Clements. Why I thought Lee was a wild animal expert I have no answer for.

Lee ascertained the situation, went back to his room and came out..... with a mail bag.

He immediately began commentary, with at least 25 spectators, in his best Marlin Perken's impersonation:

"Welcome to Mutual of Omaha's Wild Kingdom." He began to slowly sneak down the steps. "I'm going to stand back and watch Jim bag the creature."

I wish I could describe this amazing situation.

Lee has this brown bag with U.S. mail on it.

A mean cat has his back arched and ready to rip.

Even though Lee is talking, the sound of the cat's evil purring is slowly echoing off the staircase.

And then Lee leaped. The cat screamed!

He jumped 2 steps from the landing and landed on top of the cat's head with the mail bag.

But somehow he missed!

Instead, he was holding an open mailbag and the hind quarters of a crazy, fire breathing, paw swinging monster! The cats head and paws were lashing out of the bag!

You had Alabama football players ducking, running, and screaming as this crazy spectacle ran by.

Lee ran down the hallway, into the open covered connector to the Annex and tossed bag, cat, and all over the railing.

The cat, landed on his feet, and sprinted off into the woods.

When Coach Perkins got to Alabama, one immediate change he made under new Dorm Director Brad Bradford was to lock down Bryant Hall at curfew where no one could get in. If a player got in after lock-up, he was supposed to have to call Coach Perkins himself to be let in.

Two players (who I will leave anonymous for the time being) had, in their room, a rope ladder under their bed. If a player happened to miss curfew, all he would do is throw a few pebbles at the window of this room and they would lower the ladder.

But it was a PAY-PER-USE- so these two guys had quite a business going!

GHOST IN THE TV ROOM

There was a downstairs TV room in the hallway going to Coach Jack's Apartment. We didn't watch TV there much- but it was a nice change of pace.

One thing we like doing was taking turns getting into the TV cabinet.

It looked like the TV was sitting on a solid piece of furniture- but it actually had a hidden door.

We would take turns hiding in that cabinet and waiting for an unsuspecting person to come in. We would then 'clear' out throat as a signal of a 'visitor'.

THE HIDDEN PERSON would then start 'talking' like a voice coming from the TV. It was weird because the hollow cabinet actually threw the voice where it sounded like something 'out of this world'.

Everyone in on the joke played it VERY cool.

One day we were watching a NASCAR race and Bobby Lee Hurt came in.

"Do you guys hear that?"

We looked dumbfounded, "Hear what?"

Bobby turned on the lights.

He turned off the lights and the screaming stopped.

He turned them on and off quickly and the person in the cabinet could see the lights through a crack.

Every time the lights were on- the voice screamed.

Lights off- the voice stopped.

We sat perfectly still, in character, and watched the race.

The voice began to moan and scream.

Bobby got a wild-eyed look and ran out of the room as fast as I had ever seen him on the basketball floor.

And we never saw him in there again!