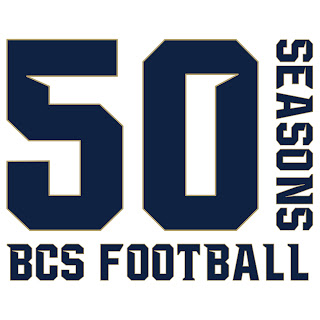 One of the joys of this football season has been doing a podcast in celebration and remembrance of 50 years of football at Briarwood. In my 31 years of coaching, it is hard to stop and celebrate. As soon as you rejoice at a fun win, you have to bear down and get ready to compete again.

There is no shortcut to success, because the only thing I can really add to preparation is hard work. Years ago I wrote about the constant mental toil that churns inside weekly. The post is old, so I had to republish it (should be re-published on Sept 1, 2022)

And so, before long... not only has a decade gone by, before you can take a breath... it becomes 3 decades!

When I realized that our 50 year celebration was coming, I knew it was time to see if we could archive a few stories and memories. The frustration is that we will leave more out than we can document. And I do hope those that get left out of the process will be gracious!

Even this post will be just a taste of what the experience has meant to me.  As we come into another game this year, I have become more acutely aware that there is a very common theme to the teams I have been able to go to battle with... and that is IT TAKES A TEAM!

And each week, as we did another podcast- it became obvious- these guys bought into TEAM concepts!
And once a team finishes a season, what remains is the fundamentals that it takes to become a team. One of the many reasons I love football is because it is the ultimate team sport. Football requires incredible cooperation and team unity. Once I became a head coach, I began to rethink my definitions of ‘success’ and ‘achievement’ and developed the idea that one factor in our success, as a program, is if we grew into a ‘team’. Many of us know the slogans- “There is no I in Team” and T.E.A.M. “ together everyone accomplishes more”- but I want a team to be much more than a slogan.

I think all teams are products of growth. A team cannot be made in a moment; it must be developed over a period of time. The fundamental ingredients to becoming a team are love and trust. To the degree that our players and coaches can learn to love each other and trust each other will be the depth of our power as a team.
In the first third of a season, a coaching staff can begin to see the types of players on a team, where they are, and what the challenges are in the way to  'becoming one heartbeat'.
Here are the three types of players, and each group has a unique challenge:
Stars and starters- these guys feel good about their role, but the danger is to rest and cease from the grind. They also bear a responsibility to encourage and include ALL of the players, no matter their role. My best groups over the years are appreciative of the scout team guys, the JV guys, and even the managers, filmers, and trainers.
The back-ups- increasingly, this is becoming an endangered species. A recurring theme in this culture is "if I don't play, I'm not going to stay on the team". A successful team HAS to have back-ups and coaches need to make sure they are developing these players. They aren't ready for prime time, but how do we get them there? Some players will always be a back-up. But 10 or 20 years AFTER a season, none of that matters.
The role players- These are significant members who often go unrecognized. But we HAVE to remind them that they have VALUE! A win is enjoyed by all!

Ultimately a team is characterized by self-sacrifice and a unity of purpose. Selfishness, bitterness, cynicism, apathy, and isolation are team killers. To develop love and trust requires communication, honesty, forgiveness, tolerance, and effort. A great step to love and trust is learning to suffer together. I can point to important moments when our football teams experienced major moves in developing the team spirit that we so eagerly wait for each season and it usually follows very difficult struggles or failures. Under pressure, we learn who we can rely on. There is very little pretending in times of pain.
CULTURE MATTERS!  We want to be champions 20 years from now!

In the early 1980’s, the University of Miami won a National Championship while Harvard University lost every game that season. Sports Illustrated did a story on where the players were 10 years later and found that a large percentage of the Miami team had gone to prison or experienced other unnecessary hardships while the Harvard players were enjoying unprecedented success in life. Who really won that year? Time shows us the obvious answer.
The same is true at ANY school. What will we gain if we win the state championship but forfeit our soul?
So please understand that we are seeking not only wins now, but wins for our players in life…ten, fifteen, thirty years from now. How do we do that? Here a few reminders for all of us.
#1 We are committed to very high standards of ethics, work, and morality.
#2 Violations of standards will bring consequences.
#3 Great athletes without character will have a hard time getting honor.
Parents can be a HUGE help here. Great parents demand the same standards out of their children and seek to model those standards at home. If a son is punished for disobedience or dishonesty or immorality- back that punishment with harsh consequences of your own, and hold to them.
If your son is tempted to quit because of high standards of work or effort- DO NOT LET HIM DO IT. Never let a son quit out of fear or dislike of work.
Let me say again, we do not believe we have to sacrifice wins now to win in life. We have seen that we can do both. In fact, by holding to high standards, we are better now AND we have seen that the program is producing great students, quality leaders, good husbands and fathers, and great community servants.
We do not win them all- but we believe time is demonstrating God’s blessings on the effort.
As you listen to our podcasts- this unified effort is evident!

Christianity is ALSO a team sport. Our need for the team is based on our enemy being the best one on one player in the history of the world. Our Savior beat Satan in the contest in the wilderness, but no one else has survived the encounter. We need each other to make it in this world of danger and pitfalls.
I believe that God’s mystery is designed to bring us together in fellowship. As we struggle with the questions of Scripture and life, we have to spend time together. It is good to hear different experiences and discuss various ideas. It is good to come together, it is dangerous to drift apart.
One of my mentors noted that most men who fall are isolated, without support or accountability. We need to make an honest effort to take time and invest in the relationships that carry us in life. For a man, it will be his spouse and a significant two or three men who are able to challenge, encourage, love, forgive, and support. The local church provides some of the greatest opportunities to develop these types of relationships.
BTW- hear this for yourself- listen to some of these podcasts... and hear team concepts in each one!