I had missed most of August rehabbing a pulled hamstring that I got on the 1st day of practice. But it was now Sept. and we were in game week, opening the season against Ga. Tech.

I cannot explain how happy I was to see my name on the practice roster, even if it was the scouts. I was not going to have to do "Miller time" for the entire practice! A yellow jersey for 'injured' put you the whole 21/2 hours with Coach Miller or Coach Kent Johnson and the strength and conditioning sadists. Qb's wore yellow also  during practice.

I went to the equipment cage.

When we got our cloth for the day, which included raggedy socks that I had to tape to stay up. A jock strap (who knew how old it was). Your practice jersey and pants. Shoes- either cleats, or turf shoes, or the dreaded black rain turf shoes that weighed 5 lbs each.

And there were always 2 or 3 footballs we had to sign as they were bringing our stuff to us.

I don't want to bust anyone's bubble- but the word in the locker room was that Mr. Meadows signed A LOT of those footballs with Coach Bryant's signature. Very now and then he would tell me whose name to sign as well. I cannot confirm or deny that I signed a football under request as Bart Starr.

Ok- I had a blue jersey ( I think- memories are fading).

Thanks to David Hannah for helping me remember the color system:


My white nike turf shoes had a little cross I had put on the toes with a black marker after going to an FCA meeting and hearing Jeremiah Castille talk about having the cross in view when you got down and looked down, and thinking about what Jesus did will lift you back up.

Rocky White taped my ankles and then it was off scout team meeting to study the Georgia Tech I-offense (which we used some the next week vs Marion Military in the JV game). 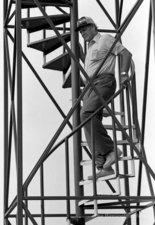 Coach Bryant had one of the most brilliant incentive techniques I have ever known when it came to motivating his players to practice hard.

At the beginning of that year, one of the coaches (I think it was Jack Rutledge) told us about Coach Bryant in his tower.

Because I was listed as a scout, I rarely did individual drills with the offense other than a few snaps before practice and some warm-up throws.

When the horn blew, I went with the defense and was tackled for about 10-15 minutes in tackling drills of all kinds.

My very first day back, we ran a drill called 'The Gauntlet". 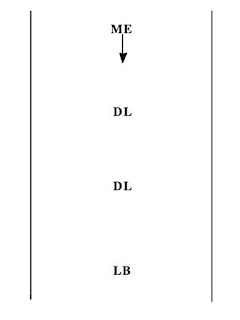 This was a live, to the ground, full speed drill. I was to run at a defensive linemen and he was supposed to tackle me. I had dummies on both sides about 4 yds apart to make a lane.

Then I got up and did it again with a defensive end.

Then I got up and did it again with a linebacker.

My first drill (I am telling the truth) at Alabama in pads was this drill.

1st up was Mike Pitts. 6'5 255 lb wall of a man! He was big and fast, but I did have decent running ability and juked just enough that he clubbed me to the ground without too much force.

My heart and adrenaline were full bore.

My second nemesis in the gauntlet was Emmanuel King. 6'4 232 pound 'greek god in uniform' man. He had the longest arms for a big man and he could move. He hit me and I spun just enough to actually slip his tackle, which made Coach Croom mad.

But I was up and felt pretty good, I had survived 2 stages of the gauntlet.

My last opponent was Eddie Lowe. Brother of Woodrow, Eddie was a smaller more compact version. He was only 5'10 or so and weighed less than 200 lbs. I had just juked and spun two big men- Eddie looked smaller and I needed to make an impact- So I decided that I was going to lower my body and run over Eddie Lowe!

It was like the concussion one must feel next to a bomb going off when Eddie hit me with more force and speed that I have ever felt on the football field! My head snapped back like a Mike Tyson knockout blow. My mouthpiece spewed right, the football and buckles of my pads went left.

This is no lie.... my breath escaped through my nostrils with such force that snot shot out and I didn't even have a cold! Fireflies danced in my eyelids!

I was on the ground- but no one cared. I had just sacrificed myself in a way that the smell of testosterone filled the air as men war whooped and danced over my dead body. Coach Croom was high fiving Eddie- "THAT'S HOW WE DO IT!"

I slowly picked myself off the ground. I did see Coach Goosetree eyeball my way, but he was wrapping Paul Ott Carruth's ankle (someone joked later that Mathews was dead but Paul Ott had a blister and that was more urgent).

Johnny Lombardo ran over to me. "Are you alright?"
I shook my head yes.
"Man", he said, "That scared me to death. I thought he had killed you."

Now, later on, I found out how crazy that was.

Coach Bryant used to take Eddie out of scrimmages because Eddie would hurt people in practice all the time. Jeremiah Castille said that Eddie was crazy. Super nice guy off the field. But in between the white lines was death to anyone who came his way.

Jeremiah would be trying to sleep at night and Eddie would be standing in the middle of the room with the projector rewind button in his hand watching film and making his steps as inside LB.

One day, Jeremiah saw that they were going to do a punt return versus punt team drill. Right before practice Eddie came up to his roomie, "Bone, you know I'm going to have to take you out in that drill today."
Jeremiah exclaimed, "What! Come on man- I'm your room mate and we are in game week. You're going to try and hurt your room mate?"

Eddie looked at him. "I'm gonna hurt you."

And I thought I was going to run over that guy!

I must have inspired him because Eddie Lowe dove over the center and sacked the Ga. Tech Qb at the start of the game in Sept. 1982. The picture that Sunday in the Tuscaloosa News was a 'parallel to the ground' Eddie Lowe, facemask to facemask with the Tech Qb.

At some point in practice- after watching Coach Rutledge teach punt protection- we went to team drill where I was the scout team Qb every week versus one of the best defenses in the country. And we went live, to the ground, every rep.

Now, most of the 1st team guys took it easy on us. The nice guys were Mike Rodriquez (believe it or not) ,Tommy Wilcox, and Jeremiah Castille. But that whole season, I could expect Jerrill Sprinkle to lay me out. I especially hated it on weeks where we ran the option because Jerrill would put his helmet under my chin even after I pitched the ball. Al Blue was another 'closeline you when you aren't looking' guy.

One time, Robbie Jones flipped me to the ground after the whistle blew. I lost my temper, got up and bounced the football off his helmet as hard as I could. As soon as I heard it hit his facemask, I thought, "I'm a dead man". But mercifully, he laughed and pushed my head back like "do it again and I will kill you."

Every now and then, especially when we were getting ready for Auburn or Tennessee, the defense practiced with a chip on their shoulder and we were buried to the ground play after play.

I was planted by some of the games best: Dante Bramblett, Jackie "helmet head' Cline,  Randy Edwards, Jon Hand, Emmanuel King, Mike Pitts, Scott McCrae, Tommy Wilcox, and Jeremiah Castille- and I was around some amazing coaches as well. I still hear the distinctive barks of Sylvester Croom, Mike Dubose, and Coach Donahue.

At the end of every practice- we went to different ends of the filed and did what was called, "No Time Period, Perfect Play"- and we went and ran goal line drives, full speed until Coach Bryant blew the whistle from the tower.

Now, the toughest part of this story is that the myth has grown up around this next story. I swear I remember it happening to us, but it may have been a story from previous days of lore.

First of all, I LIKED that period because I finally got to be a wishbone QB! We ran 34 veer and 26 belly over and over and over. It was perfect huddle, perfect snap, perfect execution, and full speed for 10 yards into the end zone.

And we did it until Coach Bryant was satisfied.

So the way the legend has it (I say it was us) but we went on and on and on.

They turned on the lights.

Assistant coaches starting glancing up at the tower.

Finally, Coach Goosetree walked over and kicked the bottom of the tower.

Coach Bryant startled up and blew his whistle.

Sometimes we had weights but the worst part of after practice was having the trainers scrub our turf burns.

The problem with artificial turf in those days was that you got nasty 'burns' where you scrapped across the plastic grass and had layers of skin torn off in the process.

The trainers had to take what was like a brillo pad and scrub it with what felt like yellow gasoline (jk) to get out all the little green splinters that were lodged in your wound.

My problem is that they seemed to enjoy my pain a little too much!

When I think to how we practice today- limited contact. Sitting out days/weeks with concussions. Plenty of water. Nice soft field turf. I wonder how the average player would hold up back then.

And when I read "The Junction Boys"- no water and playing with broken bones, I know I would not have made it back then.

I was finally back practicing and would enjoy Alabama beginning Coach Bryant's last season with a 5-0 start, including a 42-21 victory over Penn State at Legion Field. Little did I know that we were going to lose 4 of the last 6 games including the first losses in 9 or 10 years to Tennessee, LSU, and Auburn.
The lowest moment was a home loss to Southern Miss which broke a (forever) Bryant-Denny win streak.

My next few blogs will look at Coach Bryant's style and how well he managed us through the end of that season.

I also plan to write memories about his announcement of retirement, the last Liberty Bowl game, the last time I saw him, and what it was like being an honorary pall bearer at his funeral.

My Christmas break is ending though, so timing will be interesting. I hope to finish before the anniversary date- (Jan 26).

Please get word to some of the former players to update or correct any of my errors due to 30 year memory lapse!