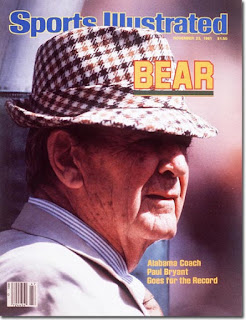 I had heard a couple of the seniors talk about how clever Coach Bryant had been in directing them to choose the Liberty Bowl.

He kind of floated that if they waited on the Fiesta Bowl, there might be a chance they ended up in Birmingham- which was hosting the Hall of Fame Bowl. Liberty it was!

Problem is- no one was excited about it at the time.

No one except me. Problem was that I was about to fall hard into an ongoing game of bait and switch.

We reported to our scout team meeting. Coach Amos Jones was waiting with plays drawn and film ready.

He made two immediate announcements.

1) "Mathews, you're going to be a running back for Bowl practice because Illinois has an NFL type thrower named Tony Eason. So, Billy Ray Pierce- you need to be ready to roll. You're gonna have to get off that lazy butt of yours and help us."

Billy Ray was one of the true characters on our team. He was a transfer from Arkansas and quite an athlete.

But he had a tendency to be a smart-alec- and even though Coach Amos loved him- the two went at each other from time to time.

Billy Ray: Coach Amos, what do you think talking to me that way?

Coach Jones: I can talk to you any way I want to.

Billy Ray: I'm not taking that.

Coach Jones: Well I'm not taking ANYTHING from ANYBODY from ARKANSAS.

Billy Ray: Oh yes you will take something from somebody from Arkansas!

Coach Jones: I ain't ever taking ANYTHING from ANYBODY at Arkansas

and all Billy Ray did was point upward and to his left without a word.

We all got it immediately...... He was pointing at Coach Bryant's office... the man from Fordyce, Arkansas!

And we all, Coach Amos included, broke into a huge laugh.

Yeah, bowl practice was going to be OK.

It was the 2nd announcement that I bought 'hook, line, and sinker'.

2) "All right listen- Coach Bryant can only take so many to the bowl game. But here is a promise- If you practice with extra heart and hustle- you can make the travel list. And going to a bowl game is special. You are gonna get a watch, travel money- but if you loaf during these bowl practices- you ain't gettin' nuthin'!"

Now, I was the one totally dumb enough to believe that!

I studied the offense. I sprinted the drills. I got hammered by Dante Bramblett and Russ Wood all week. I still laugh about trying to pick them up on slide protection. They ran through me like I was a piece of paper.

When the travel list came out... my name was not on it. However, my roomie Thom Whitely was going to go! I was so excited for him and so dejected for me.

Now let me tell you an amazing story:

The year before- the same speech was made to the walk-ons/scouts about going to the Cotton Bowl.

When the travel list was posted- Johnny Lombardo noticed that he had been given the same song and dance... his name was nowhere to be found.

And then Johnny did the unimaginable. With his car packed, heading back to Ensley for Christmas- he parked his car at the Coliseum- walked right up the stairs- and right into Coach Bryant's office!

Coach Bryant was seated at his desk.

"Well, sir, I was told that if I really busted it for bowl practices, I would get to travel. And I just noticed that I wasn't on the travel list and was wondering if I could have worked harder or if there was something I let down on."

Coach Bryant looked at him.

"Well, Johnny, I would have to look into it."

"No problem, Coach Bryant, I really have appreciated this year and Merry Christmas."

Johnny shook his hand. Walked down to his car and drove to Ensley.

In the meantime, Coach Bryant called in Coach Legg.

"How has Johnny Lombardo done during these bowl practices?"

"Well you need to find him and tell him he is going to Dallas."

And 'have to find him' he did. Someone had to drive to Birmingham to let Johnny know and bring him back and Johnny Lombardo made the trip. Johnny and his brother Chris were made of the right kind of stuff!

I would not have had the guts to do that in a million years!

Dec. 15, 1982 changed everything about what this game meant.

It was written on the board in Bryant Hall for us to report to the annex. That RARELY happened.

When I sat down and saw all the extra people in there, I immediately knew I was observing history.

His talk to us was animated, energetic, optimistic. He spoke of his plan to bring on his successor and stay on as Athletic Director. He said the next coach was going to need to be able to throw the football because of the rules and the way the game was headed.

Then, when he read his speech- he seemed tired and had no energy. It was like two different men! Again, 30 year old memory.......

Here is the transcript of the read speech:

There comes a time in every profession when you need to hang it up and that time has come for me at the University of Alabama.
My main purpose as Director of Athletics and head football coach here at Alabama has been to field the best possible teams, to improve each player as a person and to produce citizens who will be a credit to our present day society.
We have been successful in most of those areas, but now, I feel the time is right for a change in our football leadership. We lost two big games this season that we should have won, and we played only four or five games like Bryant-coached teams should play. I've done a poor job of coaching.
This is my school- my alma mater- and I love it. And I love the players- but in my opinion, they deserve better coaching than they've been getting from me this year and my stepping down is an effort to see that they get better coaching from someone else.
It is a great joy for me, personally, to have had the opportunity to coach at my alma mater. I know I will miss coaching, but the thing I will miss the most is the association I have had with the players, the coaches, the competition- all of those things that have made such a strong tradition at Alabama.
I can't say enough, or thank enough, the coaches who are with me now- and those who have been there in the past.
I plan to continue as Director of Athletics and pledge my support to my successor in every respect, particularly in recruiting.


The storm was in full brew now and a pressure was building.

The rumor was already in the works that Ray Perkins of the NFL New York Giants was going to be the new coach.

Believe it or not- we practiced later that day. And it was so strange- it was not mentioned at all.

But the practice was terrible. To be honest, all of the practices had been terrible up to that point.

The dorm was a sea of visitors that evening.

I just drifted into the back ground and listened.. watched.

Practices never did pick up.

What did come into full view was that Ray Perkins was coming to Alabama.
All of the attention was about Coach Perkins and what his staff might be like and what his pro style offense may do to coaches and players.

There were some sad players, and even sadder coaches. Word was that some were being told immediately that they would not be back.

"What are you planning on doing, Jay?"

"Well no way are you gonna play QB in a pro style offense!"

ouch! But he was right!

He said almost sarcastically, "You at least will be able to say you were that last wishbone Qb at Alabama."

And looking back now, I could kick myself.

That one comment took me into a spiral where I got my eyes on myself and lost focus of the significant things that were happening around me.

They posted the last depth chart and the travel squad.... I was not on it.

And Coach Bryant climbed down the tower for the last time.

But I was too busy wondering what I was going to do- and missed the opportunity to soak in the moment.

I didn't want to go home yet. The campus was a ghost town. I had almost no money and the dorm was shut down for the break.

And worst news of all, my roommate, Thom Whitley was in a trouble.

He wasn't going to tell me- but I couldn't help but notice there was blood in the toilet!

He was sweating and I finally realized- he is MAJORLY SICK!

He was running a fever and had blood in his urine.

But he didn't want to tell anyone because it meant he might miss the trip!

We actually held hands and prayed as hard as I had prayed in a while. I was scared, but he was terrified.

We had found out that he was going to wear #12 which was the number Coach Bryant wore at Alabama!

And it did work out- Thom actually was in the game at the end of the game. He could forever say he played the last play of Coach Bryant's career!

I got up late the next morning and drove by the coliseum.

I briefly thought about what Johnny Lomabardo had done!

"Amazing that he had the guts to do that!"

And I drove home to East Lake.

I would enjoy that game on TV- and I would literally run into Coach Bryant one more time before he passed away!

The next post will be "Last Game and Last Days".