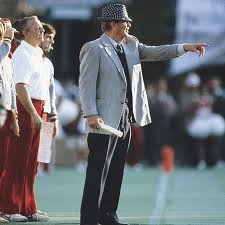 When Coach Bryant met with the team, it was called a BIG MEETING. We had all kinds of individual position meetings and I was always in a scout team meeting with Coach Amos Jones, watching the opponent tape.

My first QB meeting was with Mal Moore, Walter Lewis, Ken Coley, Paul Fields, and Perry Cuda. We all got on the elevator and I noticed that all of the guys were kind of smirking and turned toward the wall of the elevator.

Paul Fields still is one of the most charismatic guys I have ever known. He already had everyone laughing. He was turned to the door and leaning next to the light switch on the elevator. In an instant, he flipped the switch and someone wracked me full force. The lights came back on and everyone was bent over in laughter- to be fair- they all had gone after each other and the dark was pure chaos!

But a BIG MEETING was quite another story. Everyone gathered in the big meeting room. We just lounged around, chatting- sometimes watching old highlight film from teams in the past.

But when Coach Bryant walked in- EVERYONE snapped to attention. No one taught us that... but even as freshmen, we did it! I do remember Coach Murray Legg explaining that on no circumstance, EVER, were you to come into a Big Meeting late. "I know you have heard better late than never- but I am telling you- if you are late, DO NOT come in!" That totally petrified me.

As proof of that- weeks later we were at practice warming up. Way off in the distance an unknown player came jogging out of the tunnel late for practice. Coach Bryant was already in his tower and he started yelling into his mega-phone. "JACK- GET THAT GUY OFF THE FIELD. GO HOME...GO FISHING... BUT  unintelligible mumble,grumble ....." And the coaches and trainers ran like crazy jack rabbits throwing that poor soul off the field. Whoever that person was jogged on the field... but he sprinted like Carl Lewis off the field and into the tunnel and vanished!

Back to the BIG MEETING. He walks in- you snap straight up... both feet click on the floor... eyes are laser focused. And he would begin to talk.

Coach Bryant rarely talked football in those meetings. He taught life. He would read a Dear Abbey or the poem he always carried with him. He would talk about general football- the importance of the kicking game. Kicking is one, defense is two, and offense was last.

But his first time in front of freshmen he did two things. He told us to write and call our mommas and he drew a graph on the chalkboard.

The calling momma was already famous from the South Central Bell commercial. And it links a little back to when Alabama made the job offer which took Coach Bryant away from Texas A&M in 1958. He told the A&M people he hated to leave but "Mama called".... meaning his home and heart was in Alabama.

Here is the famous commercial:

Now we all chuckled when he told us to write home because we all knew the commercial by heart!

The he turned and drew a somewhat crooked chalk line on the board.

Men, you are here because at Alabama to become winners and help your team win a national championship. And right now, today, if we were to find out where you are- all of you would be a different places as far as your mental toughness and ability.
He began to make different dots on the vertical plane.
But I really don't care where you all are right now. I want to know where are you going to be 2, 3 or 4 years from now.
Some of you are going to do this- and he drew a line going up.And some of you are going to do this- and he drew a line going down.
My challenge to you is- what are you going to do today that will help you get a little better and move up and not down.
Now- let me tell you the one thing you can NEVER do... and that is QUIT. All quitters are losers. And if you quit even one little thing, the quitting will become a habit. It is hard to quit that first time, but then it gets easier and easier. And before long- you have become a quitter in life.
You will quit on your job. You will quit on your marriage.
So when it gets hard, and it will get hard. Heck, life is hard. One day you will come home and you have lost your job and your wife has run off with the milkman and you have little kids to feed and then you will find out what you are made of.
What are you made of? We are about to find that out.

Now can you imagine what I wanted to do when I went out to that practice field the first day?
I was pumped and primed to show I was a winner!

I will get to that practice is just a second. But I have to write a little about getting my equipment. Somewhere in all of this- we got our equipment from Mr. Willie Meadows. What a character!

All I remember was that man was perfect to keep up with equipment- mean as a rattle snake and cheap!

So I got a beautiful new helmet, shoulder pads with the tags still on them, and brand new shoes.

"Mathews, Mathews... why you're a WALK-ON! Give me that!" And he took my new stuff and started pulling out older stuff. For years we laughed about that.

Eventually the story was that I got Joe Namath's helmet and Fred Sington's shoes that day.

I hit the practice field- pumped! I am at the University of Alabama! I have a crimson helmet and crimson shorts and a grey t-shirt!

And here was my first of many mistakes as a player.

I was so fired up. I stretched so hard! I was determined to push it to the max! That when it came time to run... I knew I was in trouble. I had literally stretched myself into an injury!

We lined up two by two to run 40 yd sprints.

I was next to Rodney Jarmon, the scholarship QB from Coffee HS.

Coach said "Go" and I shot out of my start like a rocket and actually beat Rodney by a good 3 or 4 yards. It felt great and terrible! My hamstring was tighter than a piano string!

Problem was- I couldn't go down now- I had too much to prove.

I made it through roughly 3 more practices on a torn hamstring. I limped to my dorm room, crawled up the stairs, and cried myself to sleep in between practices.

Finally, the afternoon of the 3rd day- Coach Jim Goosetree came over to me.

"Why are you limping?"

And he cussed me a blue streak when he saw my calf muscle black from all the collected blood that had flowed from my muscle.

That led to me being out of practice, wearing a yellow jersey, and being tortured by Coach Miller for 3 weeks- I was begging Coach Goosetree to let me back to practice. I was running! A lot! Everyday!

The rest of the team was playing football. I was with Coach Miller the entire practice.

Bunny Hops! all the way across 3 fields and back.

Stadiums when we went to Bryant Denny.

200's for time when we were at the practice facility.

I reported for training room everyday at 6AM.

I begged Coach Goosetree to let me practice.

"Naw, son, you had a bad hamstring pull... why you could have had a blood clot...I'm not gonna let you back until I know you are OK."

"But I ran ten 200's for time during practice yesterday!!"

I laid down on the training table. Heat pack on my hamstring.

Right next to me was Coach Bryant. Asleep with a heat pack on his back.

We were always side by side but I never dared to disturb him.

Later that year- we all understood how much pain he was enduring that season.