The Evolution of PACE in Our Football System 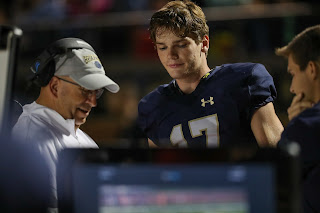 The term "NASCAR" pace was introduced to me in early 2002 as I was sitting around with some coaches at the University of Tennessee where I used to help in their summer football camp. It was late at night and we had been discussing pro's and con's of no huddle and talking about different signal and wristband systems.
I loved the concept and found myself fully embracing the idea- GO FAST- wear the defense out.

But we always ran into problems with our CODE RED or NASCAR offense.

One, wristbands are slow. It meant me thinking of what I wanted to call, finding it on my master sheet, signaling the number, having the players find it on the wristband, get lined up and snap.

I credit Gus Malzahn for getting out a systematic approach to implementing, practicing, and improving the PACE offense. And I do think the PRACTICE is the biggest key along with calling plays quickly.

By the way- as we got better at a NASCAR  pace, we found that we could push  practice reps to WARP speed! I distinctly remember a 10 minute team screen period where we easily ran through 25 screens in that time! I takes a lot of moving parts, ball spotters, etc.... but it was impressive to watch and helped create a sense of urgency.

Are there problems with pace? Sure- just like anything there are pro's and con's. One issue is that you can wear your own defense out in a game. If you are scoring or punting every 2 minutes, you can have your defense on the field for a long time.

Most pace teams do not shift or motion- so the defense gets an easy adjustment, though they have to be fast. More shifts and motion slows the pace down.

And there are times to slow down the pace. You might want to slow down to eat clock right before halftime or toward the end of the game. Some pace teams get bad in those situations. And I think you can get sloppy in technique- if speed is preeminent, you can rely too much on getting the opponent tired and mis-aligned and really not develop sound fundamentals.

But I found THE BIGGEST problem with pace is that you cannot go as fast in the game as practice. The officials are slow- the chain guys are slow- and in high school, the wide receivers have to be inside the numbers when the play clock starts. The change to the college 45 second play clock did help that that a good bit and so far, there is no 'hold up the play so the defense can sub'. But primarily in a game there is always that awkward delay as they get set, check with officials on alignment, and be still a count before the ball can legally be snapped.
Also- true pace teams are usually sloppy on film. They have used speed as a covering for poor alignments, stance, starts, and fundamentally pace teams can look out of sync.
2011- Fire Alarm, Fast Huddle Offense

In 2011 we adopted a 'modified pace' system where you get the chaos of lining up fast and snapping, but not giving the defense too much of a personnel and formation 'pre-read'.

I first began thinking about a full time attack huddle watching Auburn, Clemson use it to line up for tricks or shots- especially short yardage situations. We began using it like that as well. I noticed that the fast huddle break and line up actually created a little more chaos on the defensive side. Why not do it all the time? Run base stuff as well.
In that system- you stay in the huddle as long as you want- the key was to explode out of the break, line up and snap it as fast as possible. The receivers have time to get lined up as well.
Here is what I tried to do with this:
1) Be able to get in multiple formations using the same personnel. I have drawn up over 20 alignments- balanced and unbalanced- that we could use coming out of this huddle.
2) A more effective "Freeze" or "Check" play. Run to LOS fast- bark a cadence- check.
3) Run plays from shotgun and under-center- everything from 3 back to no back-
4) Study tendencies and break tendencies- the goal is to make the defense just 'play ball'.
5) Use option and screen game as blitz control.
We were a very difficult team to play that season, especially in our overload or unbalanced sets.
But we didn't sustain it in 2012 and found we were doing too much...but also, we had a hard time on assignments because we were snapping the ball at times without the defense lined up and we were guessing at the best way to attack them.
So what has that lead to?
We feel like a change in tempo is a better, happy medium for an effective attack.
There are times to GO FAST with quick plays, and fire alarm huddle breaks, but we also have to have a variety of ways to go slow, and use pre-planned menu plays to check to the best play versus different alignments.
We still also employ the 2 minute rules and 4 minute rules to help us manage end of half and end of game situations:

2)    REQUEST MEASUREMENTS WHEN BALL IS CLOSE

5)   STAY ON THE PILE AS LONG AS POSSIBLE

Note- in situations, use an intentional off sides play- sometimes the refs will run the game clock by mistake and you get an extra down