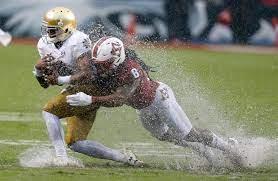 This post starts with a 22 year old memory....  long before a prevalence of turf fields no doubt!  In 2000, we travelled to Mobile to play Sophomore QB Jamarcus Russell and Williamson. Once we hit Montgomery, the heavens opened up and it rained, rained, rained all the way down I-65.
A buddy of mine called me and told me that Mobile had had record rain, but good news- Ladd-Peebles stadium was covered by a tarp.

The tarp ended up being a plastic sheet that covered the mid-field logo. And all I saw was puddle after puddle.

As a spread coach- weather can keep you up at night. I guess it is true for any team.
Same as a player. I will never forget practicing snaps at Banks High School where the coaches brought in a big bucket of water and made me handle the old, slick, wet footballs.

But in that 3rd round game down in Mobile in 2000, we made a mistake.  We gave up on the spread too soon. Before the game, we got the offense in a room and threw out all the 20 personnel sets and plays and went heavy.

What I noticed was that the whole first half while our OL was slipping and sliding and opening no holes in the run game. Jamarcus was sitting in the pocket, getting no pass rush because of the soggy mush and torched us for 3 1st half TD's.

We went back to spread in the 2nd half and climbed back into the game a little bit, but ended our season with a miserable 34-14 loss.

(BTW- we beat Jamarcus Russell the next two years to advance deep in the 5A playoffs and finally won the 5A championship in 2003. But he was an AMAZING Qb!)

So what do you do about weather?

I think you stay confident and try to stay as normal as you can. I have found WIND to be a much bigger enemy than rain. Both together is deadly.

But here are some thoughts:

GO OUT IN THE RAIN FOR PRACTICE  If it ever rains on us, I want to get out and we take almost no towels with us. We play in the rain and have fun. Some Qb's handle a wet ball better than others. Work hard on ball security.

PRE-GAME PRACTICE- Alter your pre-game by finding out what you can do. Throw in all directions.

PACK 3 BAGS OF BALLS: One for pre-game- One for 1st half- One for 2nd half. Check them ALL IN before the game.

STAY WITH THE PLAN: Don't change unless the deteriorating conditions make you HAVE TO.

PRACTICE YOUR DRY BALL CREW: Have a system of how you are going to keep the balls dry.
A sideline canopy is great. If the sidelines are too small,  just put it on the other side of the fence. There is not going to be a gig crowd.

DOUBLE MOVES ON A SLIPPERY FIELD: Call some out and ups or curl and go's. Don't be afraid of deep throws.

DON'T PITCH: Try to load up your options to allow the QB to run.

PUNT ON 3RD DOWN: My first year in Nashville as a head coach, I had to open up region play in the middle of Hurricane Irene. I caused a lot of head scratching by electing to punt 4 times on 3rd and long. But we won, and the next day I saw where some teams had lost by dropping a snap on 4th down. We mishandled a snap, had to fall on it. But we then just punted on 4th.

USE FIELD GOAL PUNT: In high school football, a Field Goal is a scrimmage kick and treated like a punt. We angled our kicker to kick it out of bounds inside the 10. We pinned the other team (in the rain) inside the 5 yard line 3 times that game and scored a safety and a touchdown doing that.

RUN TRAPS- NOT POWER: Zone and power plays just get bogged down

PLEAD, PRAY, AND PUSH FOR A TURF FIELD: When we finally got our turf field... I can't express what a difference it has made in practice and games. We did finally play on a grass field in bad conditions last season... but we did fine.

I have won more rain games than lost. The bad wind games have been my nemesis.

My only encouragement for hard winds are to throw up in the air down wind and throw low against the wind.

I do believe you should sky kick off directly into a hard wind and the ball will fall so short that you can recover it.

Bottom line- just embrace the conditions and play. You will have bad breaks, but so will they.