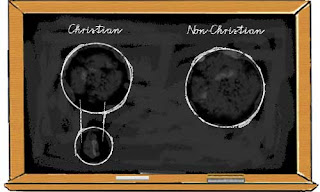 It starts with God. No system of justified belief can survive without some serious exploration of the possibilities associated with a majestic transcendent creator of some sort. Any human who rejects that thought experiment will be severely handicapped to any real movement to justify belief.

If all I have is me...then I am trapped in a very small box of knowledge, experience, and certainly confidence. I find it also interesting that no one really believes in what just he can possible know. We all 'trust' in ideas and facts that we have inherited from others.

The more a person trusts in himself as the governor of all that is true, fair, good, and right... the more dangerous and likely more error prone is such a worldview. In the deep recesses of his heart, he suppresses thoughts like 'what if I am wrong?' until the callouses harden.

A dangerous man.... because the less healthy skepticism we have in the choices we make, the more we have to suppress, control, dominate, and remove others who hold beliefs that say- "You are wrong".

I have always heard it this way... 'the smallest package in all the world is the man who is all wrapped up in himself."

The prideful man laughs in mockery when asked, 'what is tucked away behind the planet Pluto?' He hasn't been there, but he prides himself in an educated guess. And possibly is even afraid to look.

The humble man isn't upset by the same question. He says, 'I don't know, but God does' and he is never afraid to look. He is never concerned that something may be there that he did not expect. He is free to say, "Well I'll Be! Look, there is a salamander there! Boy, was I wrong and what a wonderful surprise!"

Unfortunately, we have made idols out of science and logic because we refused to place them under the authority of a transcendent Creator. Look how hard it has been for 'scientists' to admit wrong ideas about Covid origins, treatments, or procedures. In fact, the history of science has a poor track record of how it handles dissent.

Pride lifts up man, pushes out any notion of God until he himself takes the place of God.

The Bible teaches a completely different idea.... humble yourself, entertain doubts, admit mysteries, give up on a right to know it all, and you open a way to discover treasure troves of truth.

A man who rests in something BEYOND himself actually has a chance to make it through the rough and tumble world where mighty iron wills turn outside of his control.

“In the enormous scene of the universe- amid the whirl and hiss of jagged iron wheels- amid the deafening hammer blows- man, a helpless and defenseless creature, finds himself- not secure for one moment- any second an imprudent wheel may seize and rend him, a hammer may crush him to a powder- and worse- the sense of abandonment is awful.” David F. Strauss

A step to acknowledging the existence of God actually starts with an honest admission- "I don't know"... and that is a very freeing concept!

Now, we must also admit that Christians can get caught up in pride as well. The church also has a poor history of treating scientists who discovered scientific facts that challenged prevailing theological systems which usually were casualties of poor exegesis.... humility must cut both directions!

I always find encouragement from some of my early Princeton heroes!

Archibald Alexander: “Science and the Bible are allies in establishing truth. God is author of both revelations. The truth has nothing to fear from the truth”.
Charles Hodge “Science gives us the full accord of facts. It costs the church a severe struggle to give up one interpretation and adopt another, but no evil need to be apprehended. The Bible still stands in the presence of the whole scientific community, unshaken”.
OK- back to meditating on the possibility of the existence of a majestic Creator who is transcendent. What does that help me do? It allows me to contemplate a very wide narrative with coherence!
Sure, the skeptics argue that it is the "God in the gaps" mumbo jumbo that pacifies passivity and intellectual laziness. Might as well call it 'pixie dust' and stay a Neanderthal forever.
No no- not at all. 'God in the gaps' buys me time and tickles our quest to discover. But it is a much easier narrative to digest.
God isn't hiding gifts of truth and knowledge... He is excited and eager for us to find them. The 'discoverability' of great truths both large and small are likely proofs of His existence.
Some of the sentiment here can be seen in this famous (and often misquoted) line by Lewis:
“I believe in Christianity as I believe that the Sun has risen, not only because I see it but because by it, I see everything else.” (C.S. Lewis essay “Is Theology Poetry?” found in The Weight of Glory)
A big God allows for a coherent narrative... and guess what? We can be included in that story!
So there- a proper epistemology is birthed by a quest to know God. A quest that He Himself births in us.
But this is just a micron... because just as important as the transcendence is.... ah..... even more so ... is His eminence.
He is not absent, watching us from a distance. He draws near to us as sons. Yes, I need to feel the majesty of His transcendence... but the sweetness of His eminence raptures my very soul!
Ok- enough for now... baby steps to a system for justifying belief!
Posted by Jayopsis at 6/21/2022 09:06:00 PM