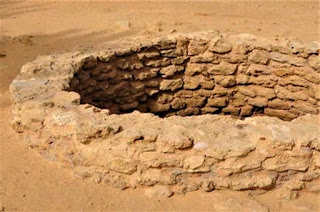 In all of my years reading Genesis, I find it interesting that I skip over the life of Isaac. He is like a forgotten patriarch, a mere player in the sacrifice story of the Abraham narrative and a foolish old man being played by Jacob's deceit.
And it was pointed out in my study recently that the narrative of Issac seems to be  a parallel and, in some cases, a  reversal of patterns in  Abraham's story. Again, a theme of Genesis is presented as 'parallel patterns with a twist or change'- this theme seems to catch my eye quite frequently.
Let's pull some observations and applications from this chapter in Genesis that I often just read quickly and move on.....
Genesis 26

[1] Now there was a famine in the land, besides the former famine that was in the days of Abraham.
Rain is blessing.... drought is a curse. In that climate and region, water was necessary for all of life and without it, everything begins to deteriorate in a vicious cycle of suffering. The same is true of the spiritual water we so desperately need.
And Isaac went to Gerar to Abimelech king of the Philistines.
This is the same name, Abimilech, that is also mentioned in Genesis 20- the name means 'my father is king" so this later Abimelech is likely a son... but again- the tactics of saying "she is my sister" is a parallel like father, like son.... but with noted  differences.
[2] And the LORD appeared to him and said, “Do not go down to Egypt; dwell in the land of which I shall tell you. [3] Sojourn in this land, and I will be with you and will bless you, for to you and to your offspring I will give all these lands, and I will establish the oath that I swore to Abraham your father.
Over and over.... when a crisis comes to God's people, there is a tendency to trust Egypt- and God continually calls us "out of Egypt".... this culminates ultimately in Christ Himself used as a fulfillment both physically and figuratively in Matthew 2:13-15
Now when they had departed, behold, an angel of the Lord appeared to Joseph in a dream and said, “Rise, take the child and his mother, and flee to Egypt, and remain there until I tell you, for Herod is about to search for the child, to destroy him.” And he rose and took the child and his mother by night and departed to Egypt and remained there until the death of Herod. This was to fulfill what the Lord had spoken by the prophet, “Out of Egypt I called my son.”
Genesis 26 continues....
[4] I will multiply your offspring as the stars of heaven and will give to your offspring all these lands. And in your offspring all the nations of the earth shall be blessed, [5] because Abraham obeyed my voice and kept my charge, my commandments, my statutes, and my laws.”
When I was reading this passage, I became rather crestfallen when I read the testimony that God has of Abraham and how little that resembles me:(
Sadly, my trend is NOT obeying His voice and NOT keeping His charge, commandments, statutes, or laws. It makes me thankful for grace, but it also can be a clue to some of the consequences I suffer when I should be reaping bountiful blessings.

Issac does as the Lord commands and stays in the land.....

[6] So Isaac settled in Gerar. [7] When the men of the place asked him about his wife, he said, “She is my sister,” for he feared to say, “My wife,” thinking, “lest the men of the place should kill me because of Rebekah,” because she was attractive in appearance. [8] When he had been there a long time, Abimelech king of the Philistines looked out of a window and saw Isaac laughing with Rebekah his wife. [9] So Abimelech called Isaac and said, “Behold, she is your wife. How then could you say, ‘She is my sister’?” Isaac said to him, “Because I thought, ‘Lest I die because of her.’” [10] Abimelech said, “What is this you have done to us? One of the people might easily have lain with your wife, and you would have brought guilt upon us.”
Here again a parallel account to Abraham- but Abimelech is wiser.... he has seen this catastrophe before!
[11] So Abimelech warned all the people, saying, “Whoever touches this man or his wife shall surely be put to death.”
Why does Abraham and Isaac keep doing this foolish thing? Well..... it works. Sometimes our conventions are not palatable but employed purely for survival.
The Bible does not condone any behavior that violates the moral and right thing to do. But it does record truthfully the nature and habits of man.
In Luke 16, regarding the parable Jesus taught regarding the unjust steward:
The master commended the dishonest manager for his shrewdness. For the sons of this world are more shrewd in dealing with their own generation than the sons of light. [9] And I tell you, make friends for yourselves by means of unrighteous wealth, so that when it fails they may receive you into the eternal dwellings. (Luke 16:8-9)
Always has been food for thought! Abraham went to Egypt and prospered, Isaac stays in the land and prospers as well. And it can be argued that Isaac had much less difficulty.... though the curse in Genesis 3 never leaves us.

[12] And Isaac sowed in that land and reaped in the same year a hundredfold. The LORD blessed him, [13] and the man became rich, and gained more and more until he became very wealthy. [14] He had possessions of flocks and herds and many servants, so that the Philistines envied him. [15] (Now the Philistines had stopped and filled with earth all the wells that his father’s servants had dug in the days of Abraham his father.) [16] And Abimelech said to Isaac, “Go away from us, for you are much mightier than we.”

Sadly, human nature of compare and compete, jealousy and misunderstanding prevails.... men will destroy the work of others just out of spite!
In Isaac's  departure, we have this strange account of digging, covering, and re-digging wells. The arguing with herdsmen is also a parallel back to Abraham.

[17] So Isaac departed from there and encamped in the Valley of Gerar and settled there. [18] And Isaac dug again the wells of water that had been dug in the days of Abraham his father, which the Philistines had stopped after the death of Abraham. And he gave them the names that his father had given them. [19] But when Isaac’s servants dug in the valley and found there a well of spring water, [20] the herdsmen of Gerar quarreled with Isaac’s herdsmen, saying, “The water is ours.” So he called the name of the well Esek (strife and contention), because they contended with him. [21] Then they dug another well, and they quarreled over that also, so he called its name Sitnah (enmity). [22] And he moved from there and dug another well, and they did not quarrel over it. So he called its name Rehoboth (broad places- room enough for all), saying, “For now the LORD has made room for us, and we shall be fruitful in the land.”
Let's start with the pure pain of this exercise. How exhausting! Digging, covering, re-digging, arguing, contention- such is a lot of our life today. Exercises in vanity... the vanity of pride and the vanity of emptiness.
A lot of my job is just trying to mitigate problems in relationships. It wears on me to be quite honest.
I credit Isaac for the only possible response to allow reconciliation... he just keeps digging. And when prospering, he is willing to share. He doesn't hold grudges... he lets bygones be bygones.
What kind of man is the Lord looking for? I am reminded about what Paul said about Timothy:
"I hope in the Lord Jesus to send Timothy to you soon, so that I too may be cheered by news of you. [20] For I have no one like him, who will be genuinely concerned for your welfare. [21] For they all seek their own interests, not those of Jesus Christ. [22] But you know Timothy’s proven worth, how as a son with a father he has served with me in the gospel. (Philippians 2:19–22 ESV)"
It takes great mercy and great patience to keep digging and naming those wells- but the drought demands we keep at it. For a time, it looks like it is getting worse.... strife turns to enmity... but in time the Lord honors obedience, love, and hospitality... and soon there is enough for all!
We have a beautiful picture below:

[23] From there he went up to Beersheba. [24] And the LORD appeared to him the same night and said, “I am the God of Abraham your father. Fear not, for I am with you and will bless you and multiply your offspring for my servant Abraham’s sake.” [25] So he built an altar there and called upon the name of the LORD and pitched his tent there. And there Isaac’s servants dug a well.

[26] When Abimelech went to him from Gerar with Ahuzzath his adviser and Phicol the commander of his army, [27] Isaac said to them, “Why have you come to me, seeing that you hate me and have sent me away from you?” [28] They said, “We see plainly that the LORD has been with you. So we said, let there be a sworn pact between us, between you and us, and let us make a covenant with you, [29] that you will do us no harm, just as we have not touched you and have done to you nothing but good and have sent you away in peace. You are now the blessed of the LORD.” [30] So he made them a feast, and they ate and drank. [31] In the morning they rose early and exchanged oaths. And Isaac sent them on their way, and they departed from him in peace. [32] That same day Isaac’s servants came and told him about the well that they had dug and said to him, “We have found water.” [33] He called it Shibah (oath); therefore the name of the city is Beersheba (7 wells of Oath) to this day.
We need to keep digging as servants. Over time, we find altars of praise, oaths of promise, water of blessing, celebrations of food and drink, and finally a legacy of peace. Lord, may Your Kingdom come!

The last verse of this amazing chapter ends with a hint though that life is a struggle to the bitter end... even for the patriarchs of God. And the apathetic, godless son of Isaac continues to inflict pain

[34] When Esau was forty years old, he took Judith the daughter of Beeri the Hittite to be his wife, and Basemath the daughter of Elon the Hittite, [35] and they made life bitter for Isaac and Rebekah.
Regardless- keep digging, keep loving, keep serving and pray for mercy to be extended to all.... most of all to me because I need it!
Posted by Jayopsis at 1/25/2023 10:42:00 AM