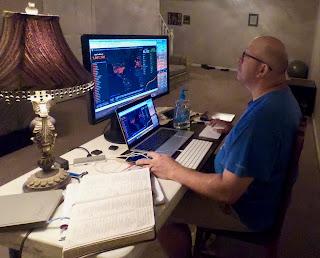 In Feb of 2020, I began what was planned to be a long commentary on the Book of Genesis. In just a few posts, Covid-19 shut down the world and my writings changed.

This picture at the beginning of this post, was my world beginning in late March 2020. As I look back on past pictures, it still shocks me. On 3/23/20 The Drudge Report home page said, "1.5 Billion Stay Home" and on 3/26/20 Spring Sports were suspended in the State of Alabama by the AHSAA.

So I am returning to Genesis in 2023, and already interested in re-learning and refreshing.

There are 6 posts that will have the (2022) added to the title to reflect that this is a re-posting from those days (hopefully with a fresh pair of eyes and analysis). Here is post 1... again.

The author of Genesis is God. The writer is Moses. And yes, there had to be another editor, copier of the 5 books (Pentateuch) to include the death of Moses (obviously allowed and protected by the Lord). What I am reading is exactly what God intended for me to have and He calls me to abide in Him. Part of abiding in Him is to wrestle, dig in, and grow in His Word. He created the stars, drafting and overseeing His written instructions is not hard.

A modern reading of Genesis presents a number of problems... the Hebrew language, the Egyptian influence, and our Western ways (dominated by the Enlightenment).... and it is helpful to keep a 'growth mindset' to let the text have its full impact on us.

And it is a wrestling match…. Do you hear the subtle manipulation of Satan in Genesis 3:1?

Now the serpent was more crafty than any other beast of the field that the LORD God had made.He said to the woman, “Did God actually say, ‘You shall not eat of any tree in the garden’?” (ESV)

So, a big part of Genesis IS Moses though his biography doesn’t show up until the 2nd book of the Pentateuch (Exodus). He is the one who is uniquely picked to lead the Exodus and allow God to continue His plan of salvation in space, time, and history. Human teachers use analysis and examples to teach truth. God channels and uses actual history to teach His people. He providentially uses all of human existence to point to Him for His glory. We can’t comprehend this… it is too lofty for us.

God reveals Himself truthfully, but it is also an accommodation. God has not been disingenuous in His communication, but he is a teacher. He has used human history and His Word to communicate in types and shadows to a reality beyond our comprehension. Moses wore a veil from a glory just from God’s back!…. Jesus pointed to a burning heap of waste to communicate the horrors of hell. All of these are truthful, but likely point to a reality beyond our current comprehension.

So why must we remember Moses? We have to understand the strange mixture of his education and identity. Moses is writing in full context and worldview of the City of Man (Egypt/ Babylon/etc) and the People of God (Israel). He was well versed in both.

A teaching technique that God frequently uses is to parallel existing world views and practices and then clearly show the distinction of His kingdom and practices.

An example of this can be seen in the story of Abraham and the call to sacrifice Issac in Genesis 22. Let’s compare that to another study in history. This was from a series of posts I wrote about called “History is His Story”.

2300 years ago a Punic warrior named Hamilcar had his 9 year old son put his hand on a sacrifice and vow a lifelong hatred of the Romans. His son was named ;"Blessed by Baal". It can't be proven, but it is possible that this was a child sacrifice to the mountain god of fire and thunderbolts. Based on urns dug up in the Valley of Tophet, sacrifice of the first born to Baal was done by the thousands. This young boy could have been a surrogate, being offered in his stead. This boy was the warrior Hannibal- who may have been motivated in his travel over the Alps to invoke the blessing of Baal in his quest to carry out his vow to his father.


Compare this to Abraham, as Jehovah called him to take his only son- the miracle child of promise- up the mountain for a sacrifice. And the God of Israel showed a counter way. God himself would provide the sacrifice.

My point is that God uses real life cultural practices to ultimately show a distinction. God’s kingdom works in the midst of cultural norms, but in the end He is counter to the City of Man. It is a recurrent theme throughout the Bible. God needs to be imminent (with us and relevant) enough before we can catch a shadow of His transcendence.

I think a BIG key to understanding Genesis has to be read in the context of the worldview of the writer, and to see how God’s kingdom stays in conflict with the ways of mankind who continually ignore and rebel against their Creator. In Exodus, there is a lot to compare to Egyptian education and influences. I submit, you can also read much of Genesis in that same light.

Some of the Genesis stories are paralleled in the myth of other nations. But I believe there was a real account and then accounts that spread and were repeated throughout ancient history. The battle would be over which one was real and which one was the copy.

Adding the context of the Egyptian influences in the education of Moses is not a hindrance of truth. All truth is God’s truth,

For interpretation purposes, my enduring hermeneutic is that we cannot adopt theological applications for today’s audience that are contrary to the original audience. We may have a fuller understanding of concepts, but they are not opposed to one another. It is part of why I am covenantal in my theology and not dispensational.

That does not mean that we don’t have a fuller sense of applications or meanings. As history has unfolded, the prophecies of the Old Testament are MUCH clearer and the mystery of God’s plan can be articulated.

But Genesis is pretty cool in that there are hints and shadows in the text that refer to truth yet discovered. The plural ‘US” in Genesis 1 is an example of this. It is now clear that this is an early indicator of the trinity, but would not necessarily be understood at the time it was originally penned.

I also think there are numerous ‘Egyptian Echoes’ in the Pentateuch that signify the educational worldview of Moses. What Moses records predates Egyptian history, but is written post Egyptian history. This has given false ammunition in the battle versus the skeptics, who do not want to believe.

So yes, we will remember Moses as we read his absolutely mesmerizing manuscript, that came in his mysterious times on the mountain of God amidst smoke, lightning, mystery, and glory.

It took a long time for Moses to discover his true lineage as a Hebrew baby in the reeds. I can only imagine how thrilling it was to reconnect to his roots and his people. He was an early picture of the Savior, leading the people through the wilderness to the promised land.

But he also was given the great honor of providing the record of God’s promise, privilege, and purpose of His people.

Over and over, he records “I will be a God to you and to those who come after you” the great theme of the covenant of grace.