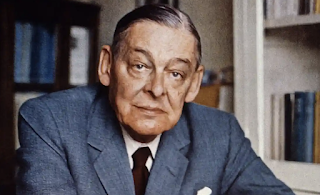 T.S. Eliot is mesmerizing. Though he was born in America, he expatriated to England in 1927 and is linked as one of the main founders of what we now call the modernist movement. If this series would continue, I would now move to the modern American writers who captured the mood of disillusionment with the American dream after two World Wars and the depression compelled the artists to cry out in their pain and disappointment.

When I read poetry, I often feel the freedom to analyze it as it appeals to me. I often don't know the entirety of what the artist means of felt when he composed it, but I apply it as it fits me. It is a luxury I don't have, for example, when I am working through Scripture where it is important to use the whole counsel of God's Word to inform and direct (with the Holy Spirits guidance, of course), let Scripture interpret Scripture. But with poetry,  I take a more selfish view and enjoy the luxury that it affords.

In my readings from T.S. Eliot, I often feel like he propels me in this liberty as well.

I will only quote the lines that resonate with me:

From The Hollow Men:

We are the hollow men
We are the stuffed men
Leaning together
Headpiece filled with straw. Alas!
Our dried voices, when
We whisper together
Are quiet and meaningless
As wind in dry grass
Or rats' feet over broken glass
In our dry cellar

Speaking of "Stream of consciousness" how about the next mesmerizing poem:

From the Love Song of J. Alfred Prufrock

This poem is a riot.... and it speaks to me as a man who is long divorced from the applause of the world. It is the ultimate anti-celebrity, snarky, and sober song of the 'never will be in the club' rest of us.
I often link this poem with the famous, 'I Went to a Garden Party' by Ricky Nelson (1972) after he was rejected by the audience at a concert in Madison Square Garden... to me, this poem has a lot of that sentiment.... left out, uncool, rejected, and somewhat depressed that we are old and no longer part of the scene... see if it hits you that way.
Let us go then, you and I,
When the evening is spread out against the sky
Like a patient etherized upon a table;
Let us go, through certain half-deserted streets,
The muttering retreats
Of restless nights in one-night cheap hotels
And sawdust restaurants with oyster-shells:
Streets that follow like a tedious argument
Of insidious intent
To lead you to an overwhelming question ...
Oh, do not ask, “What is it?”
Let us go and make our visit.

In the room the women come and go
Talking of Michelangelo.

And indeed there will be time
To wonder, “Do I dare?” and, “Do I dare?”
Time to turn back and descend the stair,
With a bald spot in the middle of my hair —
(They will say: “How his hair is growing thin!”)
My morning coat, my collar mounting firmly to the chin,
My necktie rich and modest, but asserted by a simple pin —
(They will say: “But how his arms and legs are thin!”)

Do I dare
Disturb the universe?

In a minute there is time
For decisions and revisions which a minute will reverse.
For I have known them all already, known them all:
Have known the evenings, mornings, afternoons,
I have measured out my life with coffee spoons;
That poem... I love to read it.. the older I get, the more it rings true. It seems to me to be the ultimate vanity of life statement....
And again, this poem inspired me to compose my own version of this thought WAY back... the first version of it I wrote in 1983... and it still seems more true for me today... Quarter-Filled Cups of Coffee

April is the cruellest month, breeding
Lilacs out of the dead land, mixing
Memory and desire, stirring
Dull roots with spring rain.

later on in the poem

I think we are in rats’ alley
Where the dead men lost their bones.
The opening line, now famous ( and famously misquoted without regard for the source) captures the entire mood of the modernist movement...
Spring only promises renewal... don't believe it... it is only going to hurt you when your hopes are dashed..
And this is where I get off of the modernist movement express... my hope springs eternal. April is not cruel, it is an ever present reminder of new life and new mercies. Yes, this world is a rat's alley.. but I wasn't made for this world.
Let us go then, you and I... not to a meaningless rejection from the garden party of the elites... let us go to the Land of the Lamb of God.
I hope you enjoyed visiting these guys... many of whom are interred in the Poet's Corner of Westminster Abbey (I was there in 1988 and stood next to  Patrick Swayze, true story!)... I have no clue when I may write again... never know where my quirky brain goes!
This series was my "Ode to English Poets"... sorry I bypassed Yates, Auden, and many others - I even wished to do an analysis of "Convergence of the Twain"... but on to to other things
Send me an email and tell me how you are inspired by poets. jayopsis@gmail.com
Posted by Jayopsis at 8/26/2022 01:41:00 AM