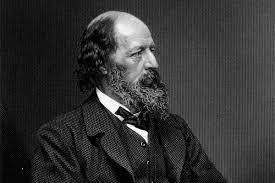 Alfred (Lord) Tennyson  is as popular today as when he was lauded as the poet Laureate for Queen Victoria in the late 19th century.

His father, George Clayton Tennyson (1778–1831), was an Anglican clergyman who served as rector. He raised a large family and "was a man of superior abilities and varied attainments, who tried his hand with fair success in architecture, painting, music, and poetry. He was comfortably well off for a country clergyman, and his shrewd money management enabled the family to spend summers at Mablethorpe and Skegness on the eastern coast of England. Tennyson was a student of King Edward VI Grammar School, Louth from 1816 to 1820. He entered Trinity College, Cambridge, in 1827, where he joined a secret society called the Cambridge Apostles."  (source wiki)

In the afternoon they came unto a land
In which it seemed always afternoon. All round the coast the languid air did swoon,
Breathing like one that hath a weary dream.
Full-faced above the valley stood the moon;
And like a downward smoke, the slender stream
Along the cliff to fall and pause and fall did seem …

This poem from the adventures of Oysseus (Ullysses)- The Odyssey has always impressed me. You read the account by Homer and then read this poem and you are struck by the brilliance of Tennyson. How often have I wanted to start regimens of discipline and said, NO MORE LOTUS EATING. And yet, the draw we have toward luxury and leisure is a constant tug on our souls.

So this may be my favorite poem of all time. I have written about it on at least three blog posts over the 18 years of jayopsis.com. I have paraphrased it- but thought this time I will deal with the text as it is. Again, reading the Odyssey by Homer give the background needed to appreciate the depth and dynamics of this verse.

Before you read it, think about an aging warrior and leader. A mover of men and nations. The battles are over and he is definitely in the last stages of his life on earth. The glory stories are fading. His will to fight and win is unmatched, but there isn't a war to go to anymore. What does that do to a man?

Tennyson masterfully imagines what that must be like. And the message is powerful.

It little profits that an idle king,
By this still hearth, among these barren crags,
Match'd with an aged wife, I mete and dole
Unequal laws unto a savage race,
That hoard, and sleep, and feed, and know not me.
I cannot rest from travel: I will drink
Life to the lees: All times I have enjoy'd
Greatly, have suffer'd greatly, both with those
That loved me, and alone, on shore, and when
Thro' scudding drifts the rainy Hyades
Vext the dim sea: I am become a name;
For always roaming with a hungry heart
Much have I seen and known; cities of men
And manners, climates, councils, governments,
Myself not least, but honour'd of them all;
And drunk delight of battle with my peers,
Far on the ringing plains of windy Troy.
I am a part of all that I have met;
Yet all experience is an arch wherethro'
Gleams that untravell'd world whose margin fades
For ever and forever when I move.
How dull it is to pause, to make an end,
To rust unburnish'd, not to shine in use!
As tho' to breathe were life! Life piled on life
Were all too little, and of one to me
Little remains: but every hour is saved
From that eternal silence, something more,
A bringer of new things; and vile it were
For some three suns to store and hoard myself,
And this gray spirit yearning in desire
To follow knowledge like a sinking star,
Beyond the utmost bound of human thought.

This is my son, mine own Telemachus,
To whom I leave the sceptre and the isle,—
Well-loved of me, discerning to fulfil
This labour, by slow prudence to make mild
A rugged people, and thro' soft degrees
Subdue them to the useful and the good.
Most blameless is he, centred in the sphere
Of common duties, decent not to fail
In offices of tenderness, and pay
Meet adoration to my household gods,
When I am gone. He works his work, I mine.
There lies the port; the vessel puffs her sail:
There gloom the dark, broad seas. My mariners,
Souls that have toil'd, and wrought, and thought with me—
That ever with a frolic welcome took
The thunder and the sunshine, and opposed
Free hearts, free foreheads—you and I are old;
Old age hath yet his honour and his toil;
Death closes all: but something ere the end,
Some work of noble note, may yet be done,
Not unbecoming men that strove with Gods.
The lights begin to twinkle from the rocks:
The long day wanes: the slow moon climbs: the deep
Moans round with many voices. Come, my friends,
'T is not too late to seek a newer world.
Push off, and sitting well in order smite
The sounding furrows; for my purpose holds
To sail beyond the sunset, and the baths
Of all the western stars, until I die.
It may be that the gulfs will wash us down:
It may be we shall touch the Happy Isles,
And see the great Achilles, whom we knew.
Tho' much is taken, much abides; and tho'
We are not now that strength which in old days
Moved earth and heaven, that which we are, we are;
One equal temper of heroic hearts,
Made weak by time and fate, but strong in will
To strive, to seek, to find, and not to yield.

The warrior- the son whose hands have no blood- the restlessness of civil leadership, the yearning of the fellowship he has with his team of warriors- and the famous end... yes, we may fail, but we are one heartbeat with an unmatched spirit to never yield.

The Charge of the Light Brigade

The Charge of the Light brigade used to bother me. It is the story of a lost battle. A brigade NOT heavily armed (thus light) is sent into a senseless battle and though they charge in valiantly, they are cut down. Tennyson released this poem just weeks after the news of this disaster came to England.

This poem has a mesmerizing beat when read aloud. When I was teaching literature, I would read it to my class for 5 or 6 periods in a row. I never grew weary of reading it though my classes for the most part were distant and disinterested.

As I have grown older, I appreciate the courage to carry out an order even if it seems like a mistake.

In times of battle, we don't have time to sit down and reason- we must act. And the nobility of the act does deserve honor!

II
“Forward, the Light Brigade!”
Was there a man dismayed?
Not though the soldier knew
Someone had blundered.
Theirs not to make reply,
Theirs not to reason why,
Theirs but to do and die.
Into the valley of Death
Rode the six hundred.

Flashed all their sabres bare,
Flashed as they turned in air
Sabring the gunners there,
Charging an army, while
All the world wondered.
Plunged in the battery-smoke
Right through the line they broke;
Cossack and Russian
Reeled from the sabre stroke
Shattered and sundered.
Then they rode back, but not
Not the six hundred.

When can their glory fade?
O the wild charge they made!
All the world wondered.
Honour the charge they made!
Honour the Light Brigade,
Noble six hundred!
When I write these blogs I often wonder.... is anyone out there? When poets published their works, there wasn't analytics or like buttons.
So if you are reading this... maybe in a far away place, a strange time of night, or years past the publish date...drop me an email: jayopsis@gmail.com. And let me know if these poems stir you as they stir me.
I'm thankful for these 'strange ministers'.
Posted by Jayopsis at 8/18/2022 06:40:00 PM