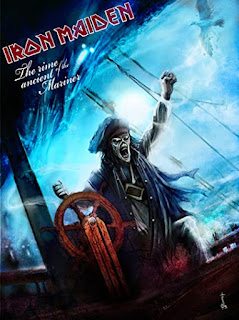 Did you know that Iron Maiden and Samuel Taylor Coleridge are connected? To be honest, I don't spend a lot of time with Coleridge. But his influence is seen within our cultural literacy. Coleridge and Wordsworth were good friends and the two, together, are largely credited for the rise of what we call "English Romanticism" though what is meant by "Romantic' in that sense has little to do with how we define romance today.

Coleridge has two poems that most casual readers know: The Rime of the Ancient Mariner and Kubla Kahn and unfortunately most folks just reduce to Coleridge as a 'poet on opium' and know little of this son of a pastor and headmaster (who passed early in Coleridge's childhood life) and the battle with poor health, anxiety, and depression when he was an adult.

The entire idea of an 'albatross around the neck' comes straight from The Rime of the Ancient Mariner as well as many other ideas and quips. And many people know of the Rime because of the famous Iron Maiden song (recorded in 1994) with the same title that tells the narrative of the poem.

The Rime of the Ancient Mariner is the longest major poem by the English poet Samuel Taylor Coleridge, written in 1797–1798 and published in 1798 in the first edition of Lyrical Ballads.
The poem is a story of the experiences of a sailor who has returned from a long sea voyage. The mariner stops a man who is on his way to a wedding ceremony and begins to narrate a story. The Wedding-Guest’s reaction turns from bemusement to impatience to fear to fascination as the mariner's story progresses.
The lines that echo in my head are the ones that everyone remembers:
Water, water, every where,
And all the boards did shrink;
Water, water, every where,
Nor any drop to drink.
(and later in the poem)

Farewell, farewell! but this I tell
To thee, thou Wedding-Guest!
He prayeth well, who loveth well
Both man and bird and beast.

He prayeth best, who loveth best
All things both great and small;
For the dear God who loveth us,
He made and loveth all. 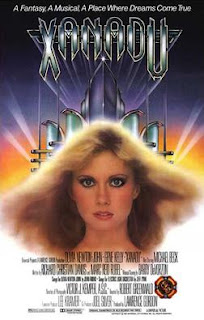 Kubla Khan is a fun run through a dream that Coleridge had (opium delirium) after reading a work about the Chinese leader bearing that name, emperor of the Yuan dynasty. It is ironic that this week, Olivia Newton John passed away and the opening lines of this poem influenced the 1980 film "Xanadu" which I never saw and was a commercial flop. I did read that a portion of Kubla Kahn is quoted in the film.
Kubla Khan
BY SAMUEL TAYLOR COLERIDGE
Or, a vision in a dream. A Fragment.

In Xanadu did Kubla Khan
A stately pleasure-dome decree:
Where Alph, the sacred river, ran
Through caverns measureless to man
Down to a sunless sea.
So twice five miles of fertile ground
With walls and towers were girdled round;
And there were gardens bright with sinuous rills,
Where blossomed many an incense-bearing tree;
And here were forests ancient as the hills,
Enfolding sunny spots of greenery.
This, in my opinion, is the height of this poem with vivid imagery of this river. I can hear the river and picture the beauty of its appearance in my mind as it winds through caverns and the 'sunless sea".

But oh! that deep romantic chasm which slanted
Down the green hill athwart a cedarn cover!
A savage place! as holy and enchanted
As e’er beneath a waning moon was haunted
By woman wailing for her demon-lover!
And from this chasm, with ceaseless turmoil seething,
As if this earth in fast thick pants were breathing,
A mighty fountain momently was forced:
Amid whose swift half-intermitted burst
Huge fragments vaulted like rebounding hail,
Or chaffy grain beneath the thresher’s flail:
Beautiful AND dangerous

And mid these dancing rocks at once and ever
It flung up momently the sacred river.
Five miles meandering with a mazy motion
Through wood and dale the sacred river ran,
Then reached the caverns measureless to man,
And sank in tumult to a lifeless ocean;
And ’mid this tumult Kubla heard from far
Ancestral voices prophesying war!
The shadow of the dome of pleasure
Floated midway on the waves;
Where was heard the mingled measure
From the fountain and the caves.
It was a miracle of rare device,
A sunny pleasure-dome with caves of ice!

A damsel with a dulcimer
In a vision once I saw:
It was an Abyssinian maid
And on her dulcimer she played,
Singing of Mount Abora.
Could I revive within me
Her symphony and song,
To such a deep delight ’twould win me,
That with music loud and long,
I would build that dome in air,
That sunny dome! those caves of ice!
And all who heard should see them there,
And all should cry, Beware! Beware!
His flashing eyes, his floating hair!
Weave a circle round him thrice,
And close your eyes with holy dread
For he on honey-dew hath fed,
And drunk the milk of Paradise.
And again- it is the imagery that pulls us in more than any 'story'. Though we understand the speaker in the poem wished to revive the song that would fill the pleasure dome though it was already a place of enchantment by its vast river, caves of ice, sunless sea ..... a type of paradise. And it could be that this is just the image of the decree and these are the plans he is building 'in the air'. The river, caverns, etc are there but the dome is still in the design stage.
But, true to form, there a hints of 'trouble in paradise' by the "Ancestral voices prophesying war" and the anxiety of the consequences when one is too full of the pleasures of that paradise.
Again, I haven't spent enough time meditating on it, but it is a fun read. Maybe I will have to watch the movie and listen to the track on iTunes.
Here are the lyrics to the Iron Maiden song- a 13 minute tempo changing and fun re-telling of the poem.
Rime of Ancient Mariner- Iron Maiden Lyrics
Hear the rime of the ancient mariner
See his eye as he stops one of three
Mesmerizes one of the wedding guests
Stay here and listen to the nightmares of the sea
And the music plays on, as the bride passes by
Caught by his spell and the mariner tells his tale
Driven south to the land of the snow and ice
To a place where nobody's been
Through the snow fog flies on the albatross
Hailed in God's name, hoping good luck it brings
And the ship sails on, back to the north
Through the fog and ice and the albatross follows on
The mariner kills the bird of good omen
His shipmates cry against what he's done
But when the fog clears, they justify him
And make themselves a part of the crime
Sailing on and on and north across the sea
Sailing on and on and north 'til all is calm
The albatross begins with its vengeance
A terrible curse a thirst has begun
His shipmates blame bad luck on the mariner
About his neck, the dead bird is hung
And the curse goes on and on at sea
And the curse goes on and on for them and me
"Day after day, day after day
We stuck nor breath nor motion
As idle as a painted ship upon a painted ocean
Water, water everywhere and
All the boards did shrink
Water, water everywhere nor any drop to drink."
There calls the mariner
There comes a ship over the line
But how can she sail with no wind in her sails and no tide?
See... onward she comes
Onward she nears out of the sun
See, she has no crew
She has no life, wait but here's two
Death and she life in death
They throw their dice for the crew
She wins the mariner and he belongs to her now
Then, crew one by one
They drop down dead, 200
She, she, life in death
She lets him live, her chosen one
"One after one by the star dogged moon
Too quick for groan or sigh
Each turned his face with a ghastly pang
And cursed me with his eye
Four times fifty living men
(And I heard nor sigh nor groan)
With heavy thump, a lifeless lump
They dropped down one by one."
The curse it lives on in their eyes
The mariner he wished he'd die
Along with the sea creatures
But they lived on, so did he
And by the light of the moon
He prays for their beauty not doom
With heart he blesses them
God's creatures all of them too
Then the spell starts to break
The albatross falls from his neck
Sinks down like lead into the sea
Then down in falls comes the rain
Hear the groans of the long dead seamen
See them stir and they start to rise
Bodies lifted by good spirits
None of them speak and they're lifeless in their eyes
And revenge is still sought, penance starts again
Cast into a trance and the nightmare carries on
Now the curse is finally lifted
And the mariner sights his home
Spirits go from the long dead bodies
Form their own light and the mariner's left alone
And then a boat came sailing towards him
It was a joy he could not believe
The pilot's boat, his son and the hermit
Penance of life will fall onto him
And the ship it sinks like lead into the sea
And the hermit shrives the mariner of his sins
The mariner's bound to tell of his story
To tell this tale wherever he goes
To teach God's word by his own example
That we must love all things that God made
And the wedding guest's a sad and wiser man
And the tale goes on and on and on
I can't decide whether to do Lord Byron or Keats next....my friend, Bob Blake likes Keats... so probably Keats next.
Posted by Jayopsis at 8/12/2022 03:41:00 AM