While I Was Away

I took a full month away from personal posting this past February.

I did fully take advantage of the time and found more time for personal reading and research. I also must admit that I did not miss reading my personal pages nor did I miss posting.

So what did I miss? Here are some things in no particular order:

The Passing of Jim Weatherly, writer of the song, "Midnight Train to Georgia" on Feb. 3rd.

I was saddened to learn of the passing of Jim Weatherly. Jim was one of my parents when I was coaching in Nashville. He was always so kind to me and we shared some good times together!

Jim played quarterback at Ole Miss under legendary Coach Johnny Vaught. He was named to the All-American team in 1964 and led the Rebs to an undefeated season. Jim was so talented in music, that Coach Vaught allowed Jim to play at local night clubs well after curfew.

Very few people know that the original title to Jim's most famous hit was "Midnight Plane to Houston" which was a quote from Farah Fawcett-Majors. Jim had lived with Lee Majors and Farah when he was trying to make it in California. During a rough patch, she told Jim over the phone that she was going to catch the midnight plane to Houston. Jim recorded it and then Gladys Knight asked if she could record it but change the title to "Midnight Train to Georgia". That song is now in the Hall of Fame.

I was talking to Jim one Saturday morning after a Friday night football game where we got beat really bad at home. Jim was at the top of a small group of bleachers and we were all taking in youth football.

We talked a little bit about the game the night before and then he pointed to the couple sitting next to him- they had been at my game last night as well- it was Faith Hill and Tim McGraw, fans of the team that had torched my team.

Tim shook my hand as we were introduced and he looked at Faith and said, "This is the head coach at CPA."

Faith got all excited and said , "THAT WAS A GREAT GAME!"

Tim looked at her like 'what are you doing honey? This man's team got horsewhipped'

I laughed and told her no problem... her team played a great game and was a really good team- and from that point on , I was always happy to tell people that Faith Hill trash talked me one time....

A friend of mine recommended this podcast and I listened to it all month- I have always been impressed with Al Mohler... but this is now my early morning drive to work information. I highly recommend it!

As I read many, many things in February, I listed some amazing quotes- here are just a few:

The past decade saw the rise of the woke pro­gres­sives who dic­tate what words can be said and ideas held, thus poi­son­ing and par­a­lyz­ing Amer­i­can hu­mor, drama, en­ter­tain­ment, cul­ture and jour­nal­ism. In the com­ing 10 years some­one will ef­fec­tively stand up to them. They are the most hated peo­ple in Amer­ica, and their en­tire pro­gram is ac­cu­sa­tion: you are racist, sex­ist, ho­mo­pho­bic, trans­pho­bic; you are a bigot, a vil­lain, a white male, a pa­tri­ar-chal misog­y­nist, your day is over. They never have a sec­ond move. Bow to them, as most do, and they’ll ac­cuse you even more of newly imag­ined sins. They claim to be vul­ner­a­ble vic­tims, and moral. Ac­tu­ally they’re not. They’re mean and seek to kill, and like all bul­lies are cow­ards. By Peggy Noonan......January 02, 2020 07:15 p.m. EST

“We ascribe beauty to that which is simple; which has no superfluous parts; which exactly answers its end; which stands related to all things; which is the mean of many extremes.” - Ralph Waldo Emerson


“Let us so live that when we come to die even the undertaker will be sorry.” - Mark Twain

“When we seek to discover the best in others, we somehow bring out the best in ourselves.” - William Arthur Ward

“Make things as simple as possible, but not simpler.” - Albert Einstein

“Go often to the house of thy friend, for weeds choke the unused path.” - Ralph Waldo Emerson

“Hating people is like burning down your own house to get rid of a rat.” - Henry Emerson Fosdick

“The most pitiful among men is he who turns his dreams into silver and gold.” - Kahlil Gibran

“Persistent people begin their success where others end in failures.” - Edward Eggleston

“Show me a man with both feet on the ground, and I’ll show you a man who can’t put his pants on.” - Arthur K. Watson

“The more original a discovery, the more obvious it seems afterward.” - Arthur Koestler

“Loyalty to a petrified opinion never yet broke a chain or freed a human soul.” - Mark Twain

“The happiness of your life depends upon the quality of your thoughts: therefore, guard accordingly, and take care that you entertain no notions unsuitable to virtue and reasonable nature.” - Marcus Aurelius

“Character cannot be developed in ease and quiet. Only through experience of trial and suffering can the soul be strengthened, ambition inspired, and success achieved.” - Helen Adams Keller

“If you want to build a ship, don’t drum up people together to collect wood and don’t assign them tasks and work, but rather teach them to long for the endless immensity of the sea.” - Antoine de Saint-Exupéry

Somehow the roles have changed…

Media used to investigate, but now they educate

Schools used to educate, but now they corporate

Business used to corporate, but now they legislate

Governments used to legislate, but now they moralize

Churches used to moralize, but now they minimize

Technology used to minimize, but now they authorize


Discontentment is highly combustible; it can fuel our ambitions or blow our opportunities to pieces.

We send messages, hiding behind tweets and emojis… our passions pushing us to press ‘send’.... but no healing takes place without losing personal space… eye to eye… words that are heard and felt.

The whole world is ratched… I am in the world…. therefore, I am ratched

If I am the hero of my story…. my readership is very, very small
I went fishing in Feb as well- killed them on jerkbaits- my favorite way to catch a bass! 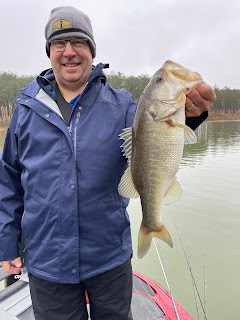 Got a Pelaton - finally delivered.
I have had a great run of diet and exercise in 2021.
I loved my time away... but it is good to be back!
Completed some plans on the Bible app as well...