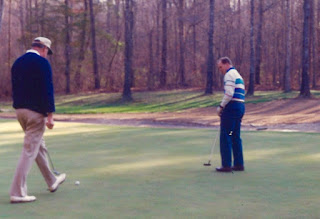 STEGALL GETS SERIOUS
If you only have time to read one of these... this is the one.
I was getting about as good as I could get in golf.
Not great, my game is greatly limited by poor habits and flexibility.
But I had become the golf coach at Briarwood and had more opportunity to practice, especially the short game and it was helping my scorecard.
I could tell that Mr. Stegall was really pleased with my growth and we got to enjoy the game more with each improvement . He usually beat me, but every now and then I would happen to be lower. I never competed against him, we just played the course.
I started keeping a handicap and had whittled it down to a 12. I don't know if I will take time to write about breaking 80 with him or not... but I have never worked so hard to produce so little in athletics.
On good days, I shot an 81 or 82. On average days, I shot between 83 and 86 and my bad days were usually still under 90.
Stegall played mostly to an 8 if I remember. But his 8 at Shoal Creek usually meant he was going to shoot between 74 and 78 on just about any course.
And Mr. Stegall never played the senior tees, we played the standard members tees on just about every occasion. I usually out drove him in distance, but his iron play and short game was as good as any.
He played a draw on just about every shot.
This next story is the one I tell them most...
One beautiful day, Mr Stegall talked about the glory of the leaves changing for the Fall.
That man loved nature and nature's God. He spotted every bird, heard every animal, smelled every flower, and basked in the sunshine like a kid in summer.
But this day, the question of the day took a dark turn....

these were men who built factories......
they founded businesses .... led churches.........strong men.. but now they just seem to wither like scattered leaves…
so answer me this…

How do you die with dignity?”
I heard the sound of the wind blowing a few more leaves off of the branches.

I knew better than to give his question a hasty or foolish response.
“I’ll have to think on that one Mr Stegall”...... and we played on.
We didn't talk anymore that day. It was an odd quiet that surrounded us like a golden sepulcher.
I was on the golf course with him again a few weeks later and Stegall had not forgotten my assignment.

“Jay..... have you been thinking about my question.. How do you die with dignity?”

“Well, Mr Stegall, I have been reading I Corinthians 15 and I don’t think we die with dignity......Death is sin’s last knockout blow, if we live long enough, we end in shame. We are a man once and a baby twice. Frail..weak… dependent.

But Paul makes it clear in that great passage, one of my reasons for living....we are sown in dishonor but we are raised in glory. We go down in shame, we are raised in victory. Christ has done so for us!

Our job is to fight like heck until that last dying breath, which is the great glorious trumpet call of God as He calls us home. If we die in Christ, we do die with honor, no matter what it may look like.”
He looked with at me with deep eyes and a low voice.. “EXCELLENT!”
Over the next few years, many of the Old Goats couldn't make the tee time.
The doctor visits were more numerous, most of them were bandaged from skin cancers or nicks to their skin while on blood thinners.
These men never lost their smile.... but underneath I could always see the war.
It takes a long time for the transition to take hold... but one by one these grand men were loosening their grip on the world but were tangibly experiencing God's grip on them.
Fortunately, it wasn't Stegall's time yet.
But the chill of that fall day was a reminder that our time was getting short.
To be continued.......
Posted by Jayopsis at 3/04/2021 06:28:00 AM