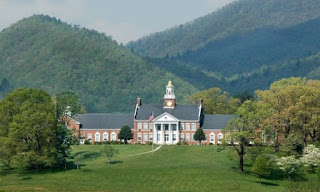 The picture to the left is the Rabun Gap - Nacoochee School near Dillard, Georgia

ON THE ROAD WITH STEGALL

Mr Stegall took his game on the road quite often. And it didn't take him long to realize I was a good partner for those trips. I was young and I was happy traveling as cheap as he did.

I don't think I have made it clear how strong and energetic he was for his age. He never got tired and I do think most of the other old goats did not have his capacity to play golf and keep going on to other things.

About once a month on Sunday afternoons, I would go to his house at Shoal Creek and we would clear brush, play the par 3 course there, go fishing at one of the lakes, clean the fish, and then his wife (Momma Ann) would cook us a meal.

That energy doubled on road trips. So I had a lot of advantages.... he made me drive his van as well.

Mr. Stegall never lost his frugality that had to be linked to his early days as a poor boy in Bear Swamp, South Carolina. He had an uncanny way of finding the most inexpensive places to stay and eat that I have ever seen. And these places were nice!

He took my wife and me to the Master's one year, for example.

He found lodging was much cheaper just across the state line from Augusta and our breakfast there was $1.99. It was our wedding anniversary and we all celebrated at Olive Garden, with coupons. His FAVORITE part of the Masters was the pimento cheese or egg salad sandwiches in the green wrappers that sold for $1.50.

So yes, we went to the Master's.... one of the most exclusive sporting events in the world, and our rooms were $45 a night, and we ate breakfast, lunch, and dinner for about $15 each. Try doing that!

We went to many great places and golf courses over the time we spent together.

Most of the time, we went to the mountains.

Mr. Stegall was one of the typical snowbirds in their retirement years. It was all about the temperature. You went to the beach in the winter and to the mountains in the summer. It definitely allows for the best golf during those seasons.

But it was the North Georgia mountains and the Carolina's that made Mr. Stegall come alive. It was his roots and his heart.

One frequent stop in those days was the Dillard House in Dillard, Georgia. It has been in service since 1910 and is most known for the "family style" menu served on circular 'lazy Susans' in the middle of the table.

From the dinning room, we also had a view of the Rabun-Gap Nacoochee school where Mr. Stegall went to school. At that time, the school was a junior college that accepted Stegall after he finished Walhalla High School. In those days, the school was a boarding school for mountain people. The students actually farmed their own food there. Stegall's job there was handling a team of mules!

I guess I need to write a little bit about the vehicle we road tripped in. Again, the man was NOT extravagant. I drove him around in his 1989 Plymouth Voyager minivan. But I guarantee that it had ONE feature that no other van in the country had. And that ONE feature was added when he replaced that van with another van a few years later..... 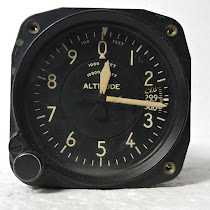 All of Mr. Stegall's vans had an altimeter that he had taken from a WWII bomber. He liked knowing his standing versus sea level at all times. And driving in the mountains kept him entertained. I thought about it for a while, but I don't think he used it to judge whether the course required a 7 or 8 iron from 155 yds out.

One more point about driving in the mountains with Stegall.

He constantly pressed me to NOT use the brakes when I was going downhill on steep mountain switchbacks.... rather, he wanted me to slow the van by downshifting into low gears and only tap the brakes.

THAT was so uncomfortable for me... I thought I was tearing his transmission up.... but that is exactly how he drove and he pushed me pretty hard to do it the exact same way!

We never listened to the radio when we travelled, he played co-pilot and tourist guide all the way.

We always had to roll the windows down when we passed a cornfield and he would ask me if I could hear the corn growing. The first few years he asked, I tried to hear it. Later, I realized that it was just a figure of speech.

He also used the time to discuss deeper theological issues. He loved telling stories about the preachers he had taken to play golf at Shoal Creek.

He told a fun one about R.C. Sproul standing over a birdie putt on the par 3 #5 hole just down from his house. He said R.C. enjoyed the round more than anyone else he had ever played with.

He said R.C. stepped back from the putt and said a prayer out loud.

"Lord, if you allow me to make this put, you can take one day of eternity away from me!"

They all laughed, he stepped back to the ball and promptly sank the putt.

I do think it is appropriate to document that not all discussions were easy or comfortable. Mr. Stegall was a gentleman at all times... but he did not run from important discussions.

He spoke to me one trip about my covenant of marriage and the importance of never breaking my vow of faithfulness. He did not miss any part of that issue.

He encouraged me to meditate on the consequences of such actions.

He would quote Proverbs and explain that the women who aggressively pursue men are really interested in taking them down "you need to convince yourself that any woman who knows you are married and still wants to commit adultery is crazy... and will just as likely steal your wallet or slit your throat."

He had me talk through Psalm 119- "Jay, the Word of God is your only weapon in those moments" and he would have me tell him "How can a young man keep his way pure? By keeping it according to Your Word. Your Word I have hidden in my heart, that I might not sin against You!"

We never stopped discussing a range of topics.... strange, but we never talked political views... this is the first I have ever thought about that. We never talked presidents, governors.... hmmm ... can't remember a single time we discussed it.

We did talk about racism.... He was staunchly against any judgement or stereotype of a person based on the color of skin. He never used racial epithets and he never told racial jokes. He loved people no matter their stock or trade.

He and I did have our generational differences.

One quirky one was that he did not like morning showers. He believed that you only showered at night.

Mr. Stegall got up early every morning and had a calisthenics routine that closely mimics the movements we use today in modern high intensity interval training (HIIT).

He would be breathing pretty hard and had a light sweat before breakfast. When we cleared brush on his property, he had no trouble swinging an axe or handling a large chainsaw.

His hard work kept him mobile and active well into his 70's before bone cancer began its vicious assault.

Still to this day, I don't gear down on mountain road switchbacks..... probably should... but I never go down one without thinking about Mr. Stegall.