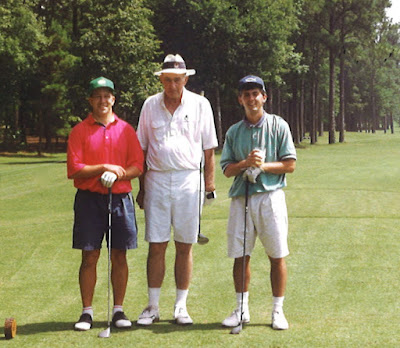 The picture to the left is a round with Mark Woods and Mr Stegall at Shoal Creek in 1991.

I have never played golf in Scotland, but it was one of Mr. Stegall's favorite trips. And his primary admiration of the Scots were how fast they played.

Mr. Stegall HATED slow golf. He had quite a few dislikes. He didn't like loud organ music after church was over. He did not like people who promised more in a minute than they would own up to in a month (he called them 'politicians' and he would point to a person from time to time and say...'politician', and that was not complimentary at all!).

He didn't like his hearing aids... He would look at me and say, "All I heard in the service today was shuffling shoes and rattling church bulletins."

He invited me to play with him one day at Coosa Pines, the fun and playable course of the Kimberly- Clark papermill plant on the banks of the Coosa river in Childersburg. He LOVED that course, and we went there quite often.

The sights on that little course were majestic.... the smells were quite the opposite and one time we were were greeted with floating yellow foam that rained all over us!

We took an extra long break at the turn and discussed the topics of the day... I had started coaching football and he was always asking me about how things were going with my new bride, Lisa, as well.

He then began the conversation that was his #1 topic of the day.

Every round of golf we ever played, Mr. Stegall had a 'main' topic. And it always began with this dramatic emphasis on my name.

He would say, "JAY?"..... with an upward tone like a question...and then there would be a dramatic pause.

I soon recognized that as THE SIGNAL..... he would follow with a question or series of questions.

If I answered well, he always had the same reply.... "EXCELLENT" and the lesson was over.

If he didn't like my answer, he would simply go "hmm" in a very short and quick spurt.

So, here we were at Coosa Pines, a gorgeous day and not a soul was on the course.

"Yes sir, it has been amazing!"

"Well tell me something.... how long does a team have in between plays?"

I answered quickly, this is a topic I could kill... "Well, Mr Stegall... in high school you have a 25 second playclock and..."

"So you are telling me that you can get your team together in a huddle, call a play, have them go to the line, and snap the ball in 25 seconds?".... and then he let out one of his great lines he used all the time... "Oh my stars!"

The phrase "Oh my stars" was as dramatic as it sounds.... and he used it ALL the time.

We would stop at the farmer's market on Finley Avenue in Bessemer on the way home from Nikki's West restaurant and he would ask the young man there.... "How much are these tomatoes?" or "How much is this okra?" and no matter what the boy said, I knew what Stegall was going to say ... "OH MY STARS, why did I retire?"

So back to our chat that day at Coosa Pines....

"JAY..... if ELEVEN boys can run a football play in 25 seconds, do you think it is unreasonable to ask a man to hit a golf shot in that same amount of time?"

And he looked away and said, 'hmm'.

So we started the back nine by both hitting good drives... I was getting better and better (and was practicing).

looked at the hole...

and then I saw HIS golf towel fly in front of my face and land next to my ball!

And he picked up my ball and marched it 5 yards backwards and threw it down on the ground!

OHHHH- I finally understood.... he had been talking about me the ENTIRE time! I was the slow player! And I was too slow to know how slow I was!

I walked back and hit the ball.... and it landed on the green about 10 feet from the hole.

And our pace of play never slowed down......

He called me one day at Briarwood about 4 years later.

"Jay, meet me at Inverness Country Club after school."

We played 18 holes in a little over an hour.

And all of Scotland would have celebrated!