A Fishing Tale- The Introduction (1) 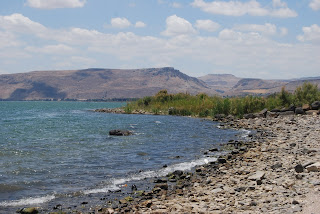 It had been a spectacular day!

Only fishermen know the deep resolution and the full emotions that mesh together at the end of a perfect trip on the water.

Simon was exhausted, but ecstatic. His back throbbed as he spread out the last net on the shoreline pebbles that now glistened bright crimson brilliance in the Mediterranean sunset.

The deep blue sky, the ripples of waves, and low clouds added to the hues of purple and orange in the pristine horizon. Jehovah had saved His best work for last; throwing head turning strokes of color with just mere minutes left in this contribution to His glory.

Birds took turns diving and floating as they too cheered the accomplishment. Teems of baitfish had surrounded the boat all day and even now, predatory schools of fish were exploding on the surface of Lake Gennesaret. No need to throw out the nets again, Simon's boat was overloaded.

Days and days of failure, heartache, and missed opportunities always precede these moments. But fishermen’s hopes die hard. This day would now fuel more days of high winds, tangled nets,  and bloody hands with mediocre or no results.

The sons of Zebedee were both lying down. It appeared that John was looking at the sunset and James was out. Simon resisted barking out orders at them, but perfect days tend to do that. The ideal conditions drove the brothers with powerful intensity. They stayed too busy to argue themselves, a surprising added attribute to the day. It had been a strangely peaceful existence in the midst of activity.

Simon’s brother, Andrew, finally had the shoreline fire intense enough to leave it and hustled back to help his brother secure the boat and prepare to clean the catch.

Simon saw that now both of the brothers were out. He put his hands on his hips and slowly shook his head.

“No, give them a few minutes. We will have a long night with the bounty.”

Andrew smiled. He liked to see his brother happy.

“We have some great water flowing from the Jordan.  It is clean and powerful.”

Simon nodded his head in agreement. He was unusually quiet, but Andrew could see the satisfaction flowing through Simon’s body.

“Yes, brother Andrew” , Simon finally could not restrain himself, “It was miracle water today. We haven't had one like that in a long time.”

Simon whistled toward the local boys. They were waiting eagerly for his call and raced one another to the boat. Simon laughed at the spectacle.

“We have had a good day! “ He tossed a small coin to the winner.

“Please run to my wife and her mom and tell them that we had a good day and will need help tonight. Bring more salt as well.”

A small group of the other boys from Bethsaida waited to see if they might be included. They always had a reverent fear of Simon, whose dark outline looked larger than life now.

Andrew immediately began to send them to their tasks and the activity had roused James and John to their feet.

One of the boys finally found the courage to speak to Simon.

“This is by far the best catch today in all of Capernaum!”

Simon swelled in the victorious acclamation.

Fishermen are good at that as well.

I have truly enjoyed getting to know Peter in a deeper and more personal way over these last few weeks.... If I get time, I will begin to write a little about it.

This fisherman from a place called "The Fishing Hut" has quite a story! [14] And more than ever believers were added to the Lord, multitudes of both men and women, [15] so that they even carried out the sick into the streets and laid them on cots and mats, that as Peter came by at least his shadow might fall on some of them. (Acts 5:14–15 ESV)