A Fisherman's Tale- Walking on Water (4) 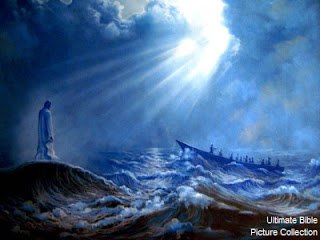 I will be going back and forth in this time with Peter.... exploring his life in a creative manner and thinking through his writings.....

Peter didn't mind being awake during the 4th watch of the night. It was good to be back on the water, he wished they stayed near the seas more. They ate much better and there was at least some break from the constant crowd of needs.

Peter stood tall on the bow and stiffened his body against the crisp counter wind that had moved the boat far off shore. He missed this friend at times, the invisible breath of healing with the hint of salt, full of memories that preserved his soul during dark nights on the sea.

Matthew broke the music and, suddenly, Peter was reminded of the presence of the disciples with him.

The twelve followers of Jesus seemed to always be confused. They did the Master's bidding. At times they asked him to explain the parables  in which he taught. But the scope and sequence of each day foreshadowed no clue to see beyond their moment, it was their Master's style.

"How should I know, Matthew?" Peter could barely make out the tax collector's silhouette in the dark shadows, "You saw him like I did! He was climbing the mountain and we were in the boat as he directed. We will go to the other side and wait."

Peter looked again out toward the horizon. There was barley any help from the stars and moon. All he knew is that the waves were steady, the wind was stirring, and they must simply wait for the break of dawn.

Back at the stern, there was a different type of stirring. Peter could see three or four of them pointing out into the abyss. Before he had a chance to say a word, a few of them fell back in terror!

"There is a spirit coming for us!"

Peter moved toward them full of confidence and courage. These were common occurrences for fishermen on the night watch who were frightened of sea monsters and ghosts. A few more disciples ducked behind Peter as he became the prominent one at the stern.

"What did you see?" Peter finally saw the cowering person at his feet was Bartholomew, who Peter assumed would not be steady at sea the first time they met.

Peter looked back up as the boat tilted up and down on each crest of a new wave. But all he could see was the ripple of the water as it caught a faint glance of moonlight.

He could also feel now that every disciple was pressed together and peering out. Everyone had been roused from their slumber. and Peter felt his frustration rising. A busy 4th watch often meant an unproductive next day.

Every man saw it at the same time and in perfect sight! A figure walking right toward them!

The piercing sound of every man's shriek, minus Peter, intensified the terror! Even steady John fell to his face in the drama!

Panic is a powerful reaction. And when it is constrained in a small fishing boat at 3:30 AM in the deep darkness, it explodes in terror.

Peter himself was alarmed and was physically shrinking back when the sound of the voice overcame the wind and whimpers.

And panic gave way..... in an instant!  For there, 30 yards in the darkness, was the unmistakable voice. Jesus was coming and he was miraculously walking on the water!

Everyone stood and could see him, even though he was distant enough to only be caught in glimpses.

And something about it grabbed Peter more than all the others. He had spent years on the seas! Water was his element and this defiance of reality was intoxicating! He needed to see it and he needed to do it!

He sang out toward the figure, “Lord, if it is you, command me to come to you on the water.”

Peter's heart was a flame of passion, a type of covetousness compelled his need to experience it.

All Jesus said was "Come" and Peter stepped immediately off the stern and men gasped when he did not sink!

And suddenly the fire was quenched. Peter had not not really moved... the boat simply kept drifting and he was now too far to grab it again.

The wind turned colder and the waves began to toss him. All of the experience on the seas meant nothing now, in  fact they testified further to the sentence of his likely death! Ultimately, all fishermen fear death by drowning... it is the type of end that is always in their presence as the sea longs to accept every sacrifice and rarely returns the gift!

Peter was now sinking!.... all rocks do! And finally he broke down to shrieking like his companions!

Jesus always seems to have that same, steady pace UNTIL someone cries out to Him for salvation.... and then he accelerates!

IMMEDIATELY, Jesus was there.

The hand of Jesus was powerful and protective and Peter knew he was now anchored and safe.

The Master clutched Peter to His side and smiled..... He said it with tenderness....

“O you of little faith, why did you doubt?”

And Peter immediately knew why he had failed. The fears and distractions, the danger and the darkness had taken away his confidence and trust that Jesus was going to shelter him.

Peter was no longer afraid!

There was no applause when the two came to the stern of the boat, arm in arm.

Peter stepped in first and fell to his face and the others followed suit.

One by one, they began to echo sounds of humility, awe, and worship.

“Truly you are the Son of God.”

And the Rock was not surprised that he was once again face down in a fishing boat in utter humiliation and fascinating adoration.

Walking with the Savior now had a whole new perspective!