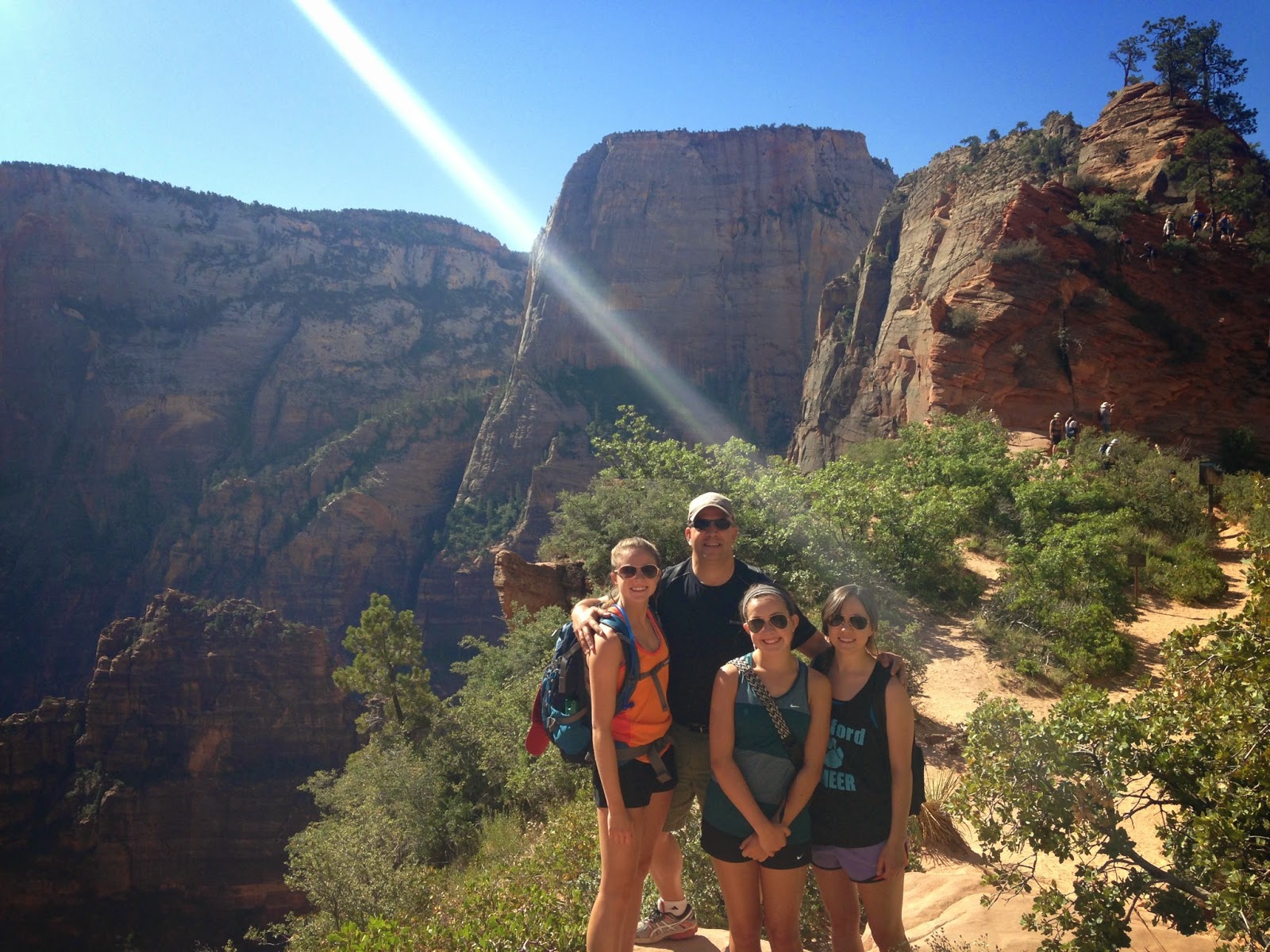 I woke up before the alarm went off...very excited to enjoy the day's adventures!

But it finally the wake up ring tone got us going at 6:15.

Warm Canadian bacon and cheese English muffins- Oatmeal- the staff made the waffles- and the coffee was really good!

We were on the shuttle early- ready to be gone the whole day. Water- sandwiches- snacks- sunscreen and we enjoyed the breathtaking sites on the way to the Grotto and Angel's Landing. 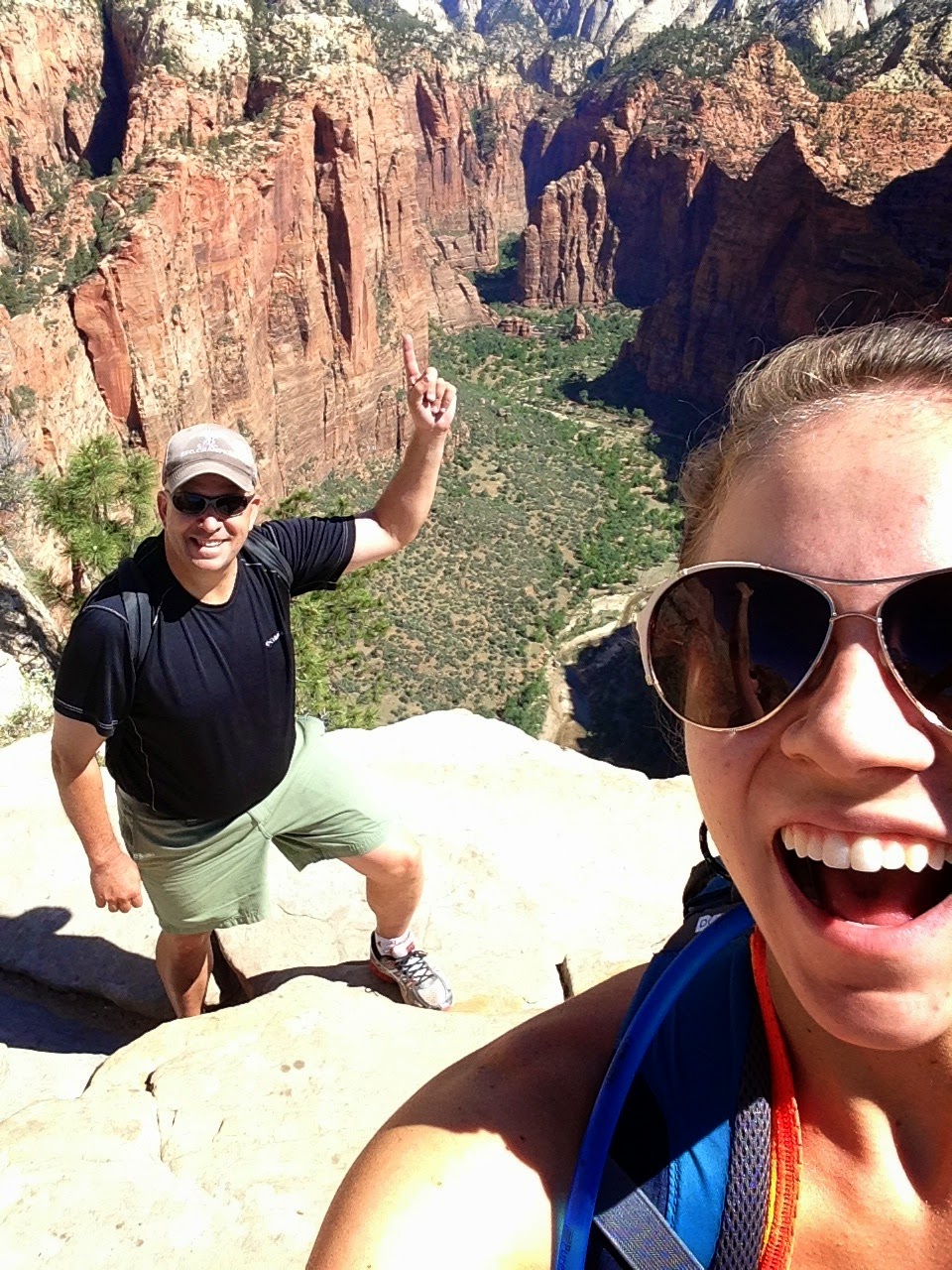 It is a 2.5 mile climb to the top of the Canyon to a spot that looks out onto the 'Great White Throne'. My devotional that morning was Psalm 8- but you also cannot help to think of the Psalms of Ascent. Mormons and Methodists were instrumental for all the Biblical names...The Altar of Sacrifice- the 3 Patriarchs Abraham, Isaac, and Jacob- and Congress named the Park "Zion National" in the 1920's (would not happen today)- but I saw God everywhere.

I saw Him in the Canyon- water carved out sand and the minerals hardened it to sandstone. I believe it happened in the flood. 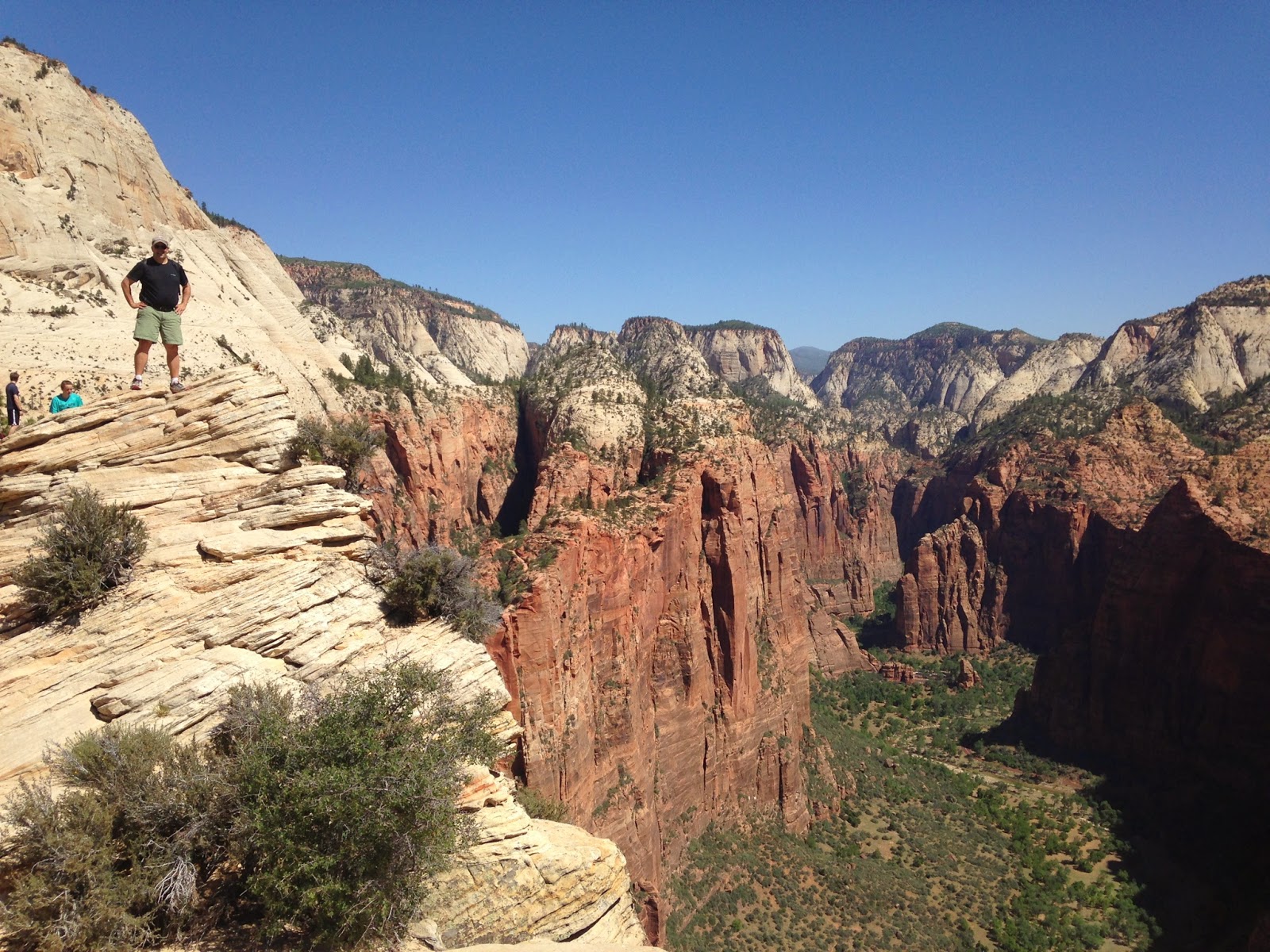 I saw Him in the tame wildlife- deer and squirrels walk the trails with you...no fear.

And then we climbed to the heavens....

This is no hike for those afraid of heights. At times you are leaning into the rock with barely room for 1- holding onto a chain- and in places it drops off of BOTH sides. 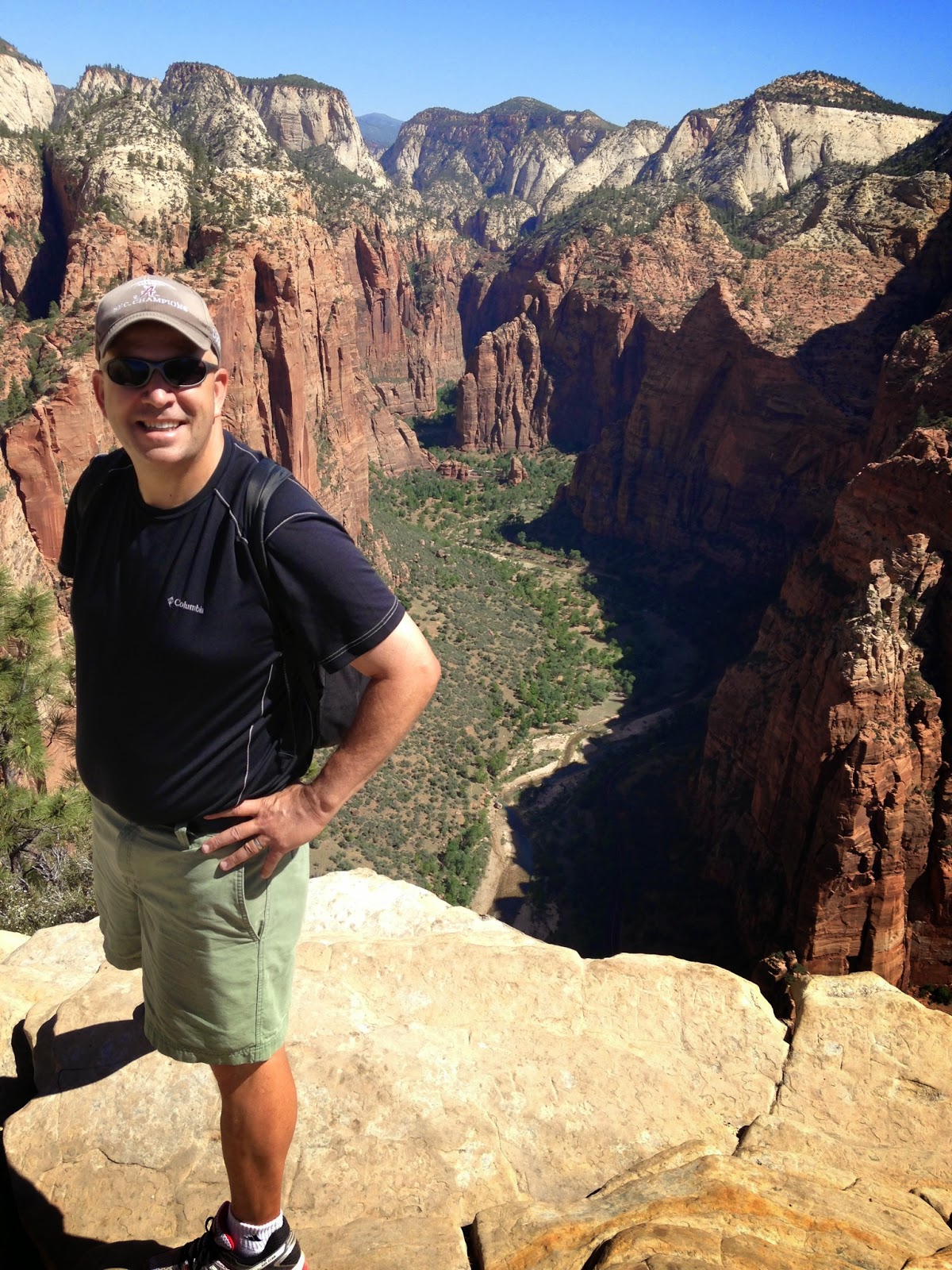 And it took me 2 hours to summit!

Once I got up there.... I had a huge rush of accomplishment- but the descent is no piece of cake!

But I saw old men and little children on the top of that ledge!

The climb is not strenuous, it was a very slow and pleasant climb. It was crowded at times and I got very nervous watching an elderly gentleman going down (we referred to him as "Number 7").

But it was so thrilling to do it and the beauty was beyond words or pictures!

There are a lot of good  Go Pro videos on You Tube to give you an idea of what to expect. But I am glad I didn't read all of the death accounts before I climbed. 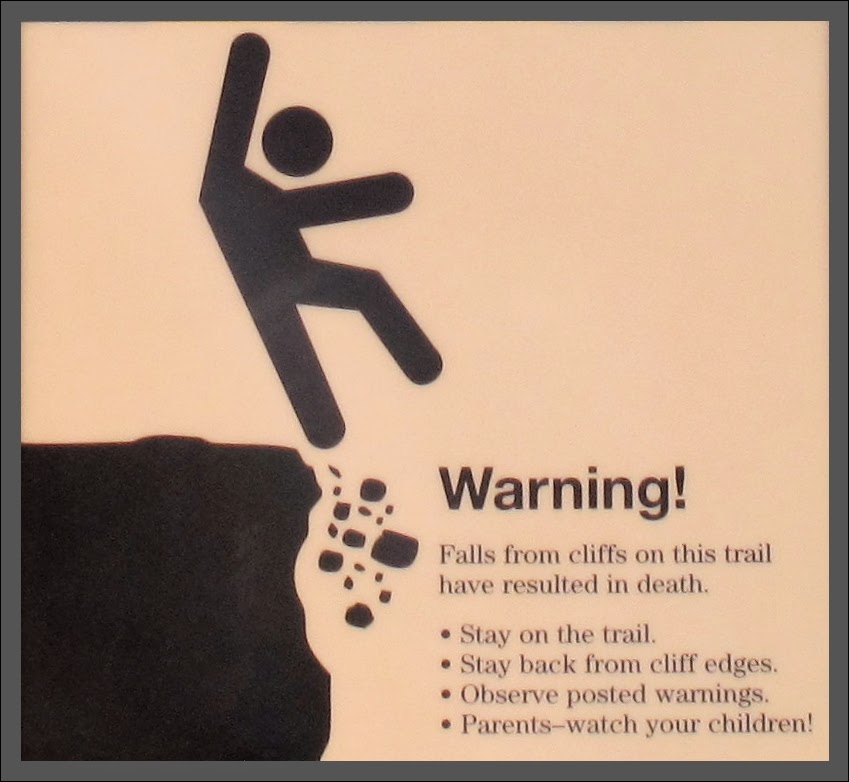 Angel's Landing though is breathtaking!

Here is an excellent video of the hike:


I heard so many languages from the large number of park visitors..but the people were really friendly and warm. 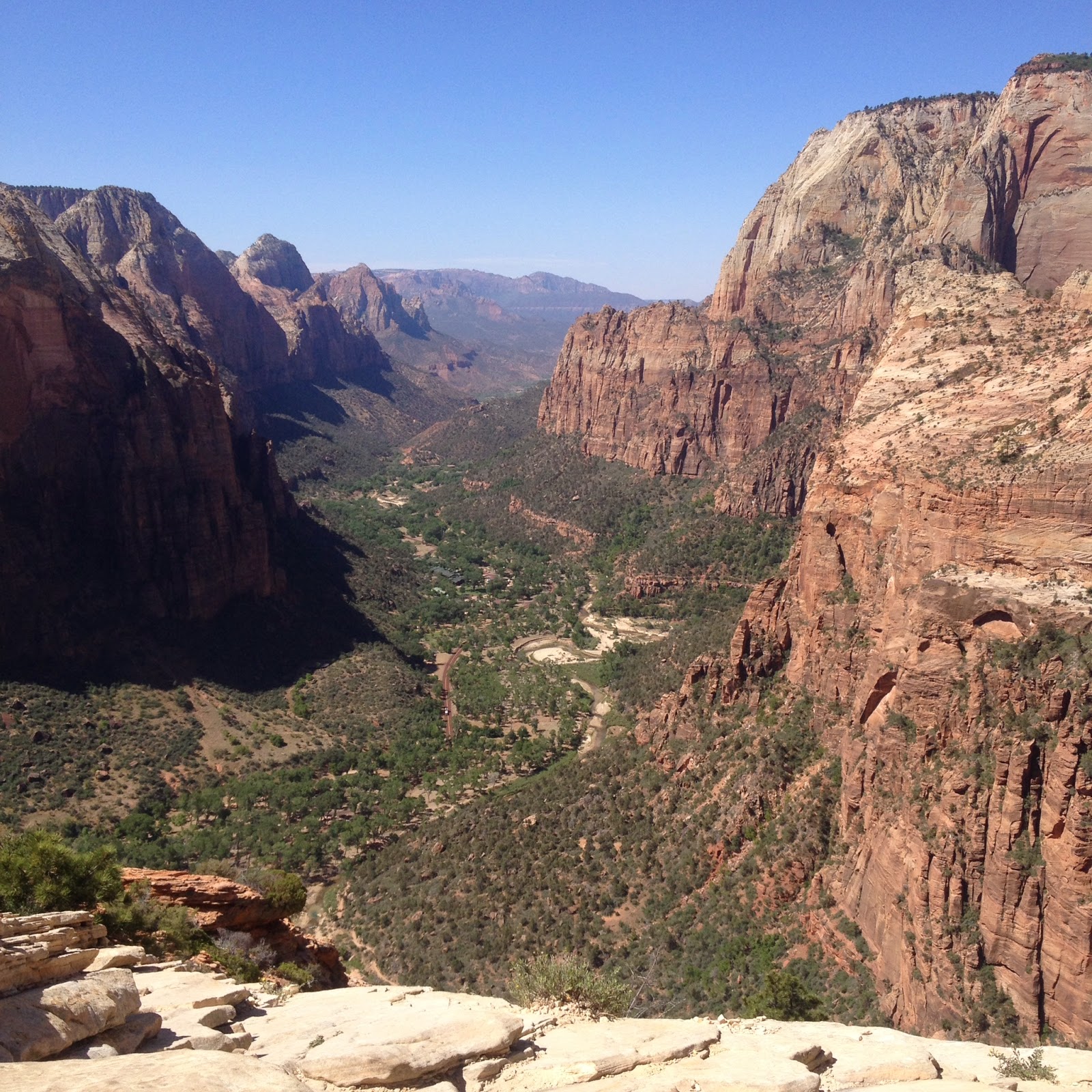 After Angel's Landing we did 'Hidden Canyon' not knowing it was an uphill climb as well with chains and ledges...but it emptied into a sand filled slot canyon with a quiet and beautiful walk.

We went back down and wound to 'Weeping Rock"- and finished with a stop and 50 yard walk to 'Patriarchs Court".

We got back to the LaQuinta- had an amazing dinner at the Parrot head Grill (there on the premises).

Hard to know exactly how far we walked.. but it was more that 12 miles and less than 16 miles we think.