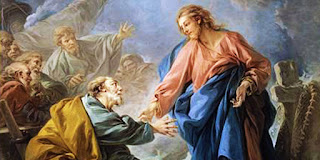 I was in a crossfire between two high school buddies, being beaten to death over a point I had made about the Bible.

It was one of those spur of the minute religious debates and they were laughing to the point of mocking me like I was a lunatic!

I was a new believer, and had read the passage below the night before, including the verse "slaves, be subject to your masters with all respect". And they were hammering me....

Right there in the small, quaint kitchen in East Lake. I was the one under fire......

"You have to be kidding me! You mean that a slave should be happy to stay where he is!"

I was standing firm: "Someone who trusts in God can be content in all circumstances", I replied.

One of my friend's mom sat there, sympathetic with my plea,  but I knew that even she wasn't buying it.

Almost 40 years later and the argument is more defined. These are not easy passages in 1 Peter 2; they evoke a lot of passion and a lot of it is from personal pain and injustice.

I wish I had a second chance to state my case. And it is hard to explain without understanding the WHOLE message of the gospel in the full view of a promise, this world will be made right!

[13] Be subject for the Lord's sake to every human institution, whether it be to the emperor as supreme, [14] or to governors as sent by him to punish those who do evil and to praise those who do good. [15] For this is the will of God, that by doing good you should put to silence the ignorance of foolish people. [16] Live as people who are free, not using your freedom as a cover-up for evil, but living as servants of God. [17] Honor everyone. Love the brotherhood. Fear God. Honor the emperor.

[18] Servants, be subject to your masters with all respect, not only to the good and gentle but also to the unjust. [19] For this is a gracious thing, when, mindful of God, one endures sorrows while suffering unjustly. [20] For what credit is it if, when you sin and are beaten for it, you endure? But if when you do good and suffer for it you endure, this is a gracious thing in the sight of God. [21] For to this you have been called, because Christ also suffered for you, leaving you an example, so that you might follow in his steps. [22] He committed no sin, neither was deceit found in his mouth. [23] When he was reviled, he did not revile in return; when he suffered, he did not threaten, but continued entrusting himself to him who judges justly. [24] He himself bore our sins in his body on the tree, that we might die to sin and live to righteousness. By his wounds you have been healed. [25] For you were straying like sheep, but have now returned to the Shepherd and Overseer of your souls. (ESV)

Love and humility go hand in hand. There is also a type of 'yieldedness 'that becomes a part of the Christian's disposition. Christ said "Blessed are the meek for they will inherit the earth." But this is NOT as welcome a virtue in current society.

It is easy to mistake 'meekness for weakness' and often compels people to look at you and wonder where your manhood is.

So when it comes to 'submission', our sinful human nature doesn't come to it easily or naturally. It feels like someone scratching on a chalkboard to hear someone bluntly screech, "The RULES say..".

It cuts right across the American trend of rugged individualism with the motto: "Don't tread on me!"

But notice Peter's admonition, he has a "why": For the Lord's sake- be subject to every human institution.

Again: It is the Lord's will for His followers to be yielded to the mandates of authority.

And in the examples he gives, he includes (yikes)... slavery.

Do what? Are you saying it a sin for a slave to rebel?

As soon as you mention the word, it brings up such pain and passion that the discussion soon dies under the fire of accusation and identification.

God's Word and the principles therein expressly condemns slavery as sin. The world however records types of slavery that continue even to this day, most evident in human trafficking in our society.

We have a lot of examples in history and God's people have had many times in their past of indentured servanthood.

Slavery is not a part of creation; it is a product of sin.

There are things in the Bible that shines light on the reality of human sin. Specific situations in a sinful world warrant specific instructions to that sinful world and that means that biblical instructions concerning slavery do not implicate biblical approval of slavery.

If the Bible records or regulates a practice, it doesn't mean it condones it......

The biblical case AGAINST all slavery is solid: Slavery undermines God’s creation, all people have equal dignity before God, all people are equally submissive to God, and all people will receive equal justice from God.

However, the Bible also regulates slavery when it is a sad reality:

I was encouraged in this view by Pastor David Platt. A lot of the statements here are his notes from a sermon in 1 Timothy 6. This was after a long and considerable exposition that clearly shows slavery as forbidden in Scripture.

Pastor Platt then noticed that God's Word ALSO mandates physical protection for slaves, it requires financial provision for slaves, it ensures caring supervision of slaves, and it promotes (and in some ways guarantees) eventual freedom from slavery.

The Bible encourages slaves when they are in this terrible plight. He asks them to act in grace to do things that are not easy! These responses and attitudes are only a product of the grace of God and in the full view of a suffering Christ on the cross.

To even begin to palate these thoughts, you have to understand:

At the same time, history will show the church (admittedly too slow) was finally the catalyst for the abolition of the slave trade. The greatest opponents to this blight were hard charging believers!

And the principles of these actions and attitudes can be applied to work situations when you find yourself providentially stuck to a job where your boss isn't high on your like list.

Peter is clearly in line with the rest of the Bible:

Christians are to honor unbelieving masters, for the glory of God, and for the advancement of the gospel.

Christians are to respect believing masters; they are to work wholeheartedly for them, and serve selflessly.

AT THE RISK OF EVEN MORE OFFENSE.....

The greatest literary character in American literature, in terms of actual heroic submission for the glory of God was Uncle Tom, the Christ honoring slave who suffered under the terror of slave owner Simon Legree in the infamous novel, Uncle Tom's Cabin.

When Abraham Lincoln met Harriet Beecher Stowe, he smiled and said, "So you're the little woman who wrote the little book that started this great big war."

We have such strong negative feelings about the book today, so much that to be called an 'Uncle Tom' is about as big a slur that can be hurled in the African-American community. But the novel was anti-slavery and Tom was a genuine her. Legree was a despicable villain!

And, as I read it, I wept for Uncle Tom's beautiful devotion to Christ and his willingness to love and pray for and endure his evil master.

But it is too demeaning... it is too high a price? Is it?

It is a walk of faith and a trust in a land that is not our current home.

The Bible also does not waste a crisis to remind us of the true essence of all things!

Difficult, dire, or unjust situations push us to find the beauty of Christ…

Our Master has become our servant and we gladly become His slave.

This type of life requires a healthy trust that God is in control and sovereign over your circumstances in life. Peter encourages us to even endure suffering- the primary motivation is that Christ himself suffered for us.

Live as people who are free, not using your freedom as a cover-up for evil, but living as servants of God.

1) Freedom- the greatest freedom in the world is the one where we are completely justified in the sight of the Creator! So we are free, under the condemnation of no one!

2) The honor of suffering unjustly holds a special place in God's heart.

Questions: These are legitimate discussions and must be explored by every believer and answered with prayer and faith.

At what point do I rebel? Am I willing to trust God enough to obey the authority He has placed in my life? But doesn't He also require a time for civil disobedience?

Am I free? Do I feel free? Does this freedom motivate me to pursue the Lord and love others? Or just serve as a way to live in selfishness?

Do I take time to pray for my boss... even if he is a hard taskmaster with faults and issues?

Hard Examples of Godly Submission  will continues in Peter's letter tomorrow....... I will have to endure the crossfire of today first!