In Defense of Coaches 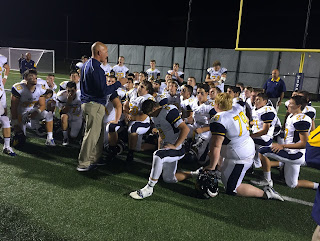 Some of you may know by now that I have recently been appointed to be the Athletic Director of our high school. I take on this role with great excitement and a sense of the responsibility that comes with the job.

I have been blessed to have a great team of people to work with and I am under no illusion that I can guide this ship as a solo effort.

From time to time, I want to dedicate blog space to thoughts about my new position and my desire to always encourage and support our coaches.


Coaching is not for the faint of heart. In some ways, it has never been harder. We live in a world of high expectations and free wheeling opinions. Our media has tuned our ears to accept outspoken critique and instant judgement.

Before I am mis-understood.... this doesn't mean that coaches should be defended in all circumstances... coaches are human being who do things at times that are indefensible. Some of these are serious enough to result in very tough consequences. But our so called 'tolerant' society is not quick to forgive and there isn't a lot of 'bearing with' and 'forgiving'.

My biggest concern in this area is when players, fans, or parents get caught up in a vicious cycle of negative talk that builds on itself to the point that a coach is damaged in the process.

How can this happen?

Part of it is the fruit of a culture of endless 'opinionating' and prognosticating. I had a well respected college head coach tell me a decade ago that ESPN was making his job harder. He said, "My players hear week in and week out a powerful message of how good they are, how likely they are to win or lose, how good I am, and whether I am on the hot seat or not. They are swayed by slick music and graphics and it is frustrating that they will take more stock in what a commentator will say more than a coach who is with them and invested in them."

And though it is hard to feel a ton of empathy for those who get millions in buy out clauses, it still hurts .... and when those same free wheeling comments drop to high school and jr high school teams, the results can be devastating.

There are times a coach should be let go.... incompetence and of course unethical or immoral behavior.

But the bar to change coaches has never been lower....

In some cases, it isn't even about the won-loss record... sometimes the call to remove a coach is simply 'my kid isn't happy'.

My philosophy is to be slow to ever replace a coach... I would rather work with a coach than take a chance on an unknown quantity.


CANNIBALIZING YOUR OWN TEAM

I am a parent of athletes... so I see this as a former player, coach, and parent.... we must always be careful about what we say concerning those who have been placed in a position of authority in our children's life.

The ability for a coach or teacher to have the credulity to speak in our children's life is related in degree to whether we have built up that person or torn them down in the eyes of our children.

The power of the parent cannot be underestimated.... that parent can set that coach up for success or failure wth just a few statements in their presence.

I have seen examples too many times in my professional life where players began to distrust their coaches and it prevented their ability to ever improve as a team.

But even then, I am still slow to hold that against a coach.... I would rather graduate the negativity than succumb to internal negative spin.

My main commitment and philosophy as an athletic administrator is to provide a support system where they feel free to coach and, at the same time, feel a healthy pressure to improve.

All coaches need to improve.... most I have known in my life WANT to improve.

And a program with stability and encouragement will show a better track record than those who change with every whim.

It is easy to write these things...much harder to stand in them...

But if there is a coach in my program.... he or she won't have to believe my words.... they will only have to watch me work.

My advice to fans, parents, and players.... step in with both feet and support the TEAM and don't worry about the coach.... that part is going to work out just fine.