There was no question that we were going to do the team again in 1986. 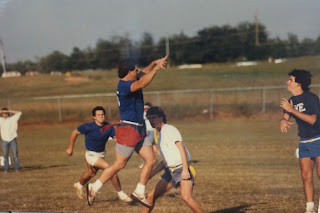 To be honest, it was refreshing to get back to just playing for fun... almost like being a kid again.

I think most innocent fun is best when there is a child-like quality to it. And speaking of 'child fun', it was about that time we got hooked on a cartoon called 'The Voltron Force'. For a few years it was 'General Hospital' and "Late Night with Letterman'.... but the new show (along with Miami Vice) was Voltron... and we grabbed a chance to watch it every time it came on.

So when we registered the team... we had new colors and a new identity... The Walk-offs 2.0 was now "The Voltron Force'.

We actually had team jerseys (t-shirts) with a Voltron Print on the front. 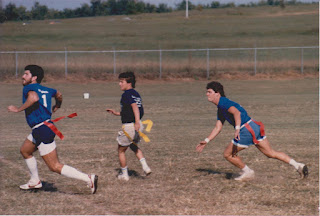 Ray Perkins' 1985 season was successful... the Van Tiffin kick against Auburn and fun Aloha Bowl win over USC had people feeling good. Few would have predicted that 1986 season would be Coach Perkins' last at the helm.

Despite denying rumors to the contrary... Coach Perkins resigned on December 31 to take over at Tampa Bay. Bill Curry would be the head coach at the start of the 1987 season.

So this is going to be doubted... but the fun and draw of the Voltron Force was putting serious pressure to keep even some scholarship players from joining us. Some of it was the leftover feelings from some of the old Coach Bryant players that they had been shunned in favor of the new Coach Perkins recruits.

One of our Voltron players (name withheld for protection) could do an amazing Coach Perkins imitation. He would entertain Bryant Hall for hours with his Perkins mannerisms and quotes. (Example: Coach Perkins said the word 'great' ALL the time.. one time we counted 73 greats in a 30 minute Ray Perkins TV show.)

The most common routine was this (Voltron Force) player standing in front of Alabama players doing a hilarious Ray Perkins imitation. His final line was..."Men, as far as this rumor about me going to Tampa Bay.. my feet are in concrete." To which a current player would blurt out.. 'WELL THROW HIM IN THE RIVER!".

This became such a hit because a player ACTUALLY said it in the back of the meeting room after Coach Perkins said that quote.

I will only say this... I personally counseled a couple of 'quality playing time players' that they would be glad years down the road that they stayed in the Crimson uniforms instead of trading them for a Voltron Force jersey. 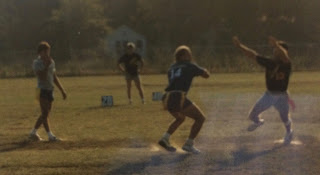 Once the word got out that we were re-doing the team and naming it the Voltron Force... our  roster exploded with quality athletes. Former Huffman HS Viking QB Bart Knight left the football squad to add blazing speed to the Voltron Force secondary.

Before we officially registered the team, we had several former Tide players and some quality high school stars on the roster.

2nd BIGGEST MISTAKE I MADE

Ok- here is where it gets crazy.

I was working on the new playbook one night when my girlfriend (now my wife and best friend of 28 years) came and asked me if I would also coach the Phi Mu sorority football team.

She said they were desperate.. and like a fool.. I said yes. I told her I would practice with them on Sundays... have their games on Thursdays and the Voltron games were on Tuesdays for the most part.

What was I thinking?

For a while- it was incredible.

But our season was quickly turned into a disaster...

Our very first game, my girlfriend was pancaked on our sideline by a huge Pi (Beta) Phi beast- she hit her head on a rock as she fell.

In one of those "there's no crying in baseball" moments- I ran to her and raised my voice....

"NO ONE ON MY FOOTBALL TEAM IS GOING TO LAY DOWN AND CRY!"

We were skunked and destroyed.... as I walked back into my room my phone rang.

It was the discipline chairman of Phi Mu... she called to inform me that my offensive coordinator had 'dated' at least 5 members of the team in a week's time.

So my girlfriend quit, we lost, and I fired one of my coaches in about a 4 hour period.

The team disbanded and we did not finish the season.

Lee Clements showed us the jersey.. it had a Voltron picture on the front and had Voltron Force and our numbers on the back.

We can't remember why.. but for some reason, we couldn't get the front of the jersey done right away.. so we played the first part of the season with a blank front of the jersey. We finally got the picture on the front right before our last game... and to this day... we consider that to be the Omen that cast the winds of fortune against us!

But our jerseys were cool. When we walked on the field... most of the games were already decided.

THE BIGGEST MISTAKE I MADE

We rolled through the regular season without breaking a sweat. We had size, speed, and depth.

Mike Graham, an amazing receiver and athlete from Bayou La Batre, AL was unstoppable and we had good talent around him.

It was now time to play once again, for the campus championship versus the fraternity champion.

And based on protest work we did in the off season- the Law School was not going to be in the mix.

Our last few games, I noticed we were being scouted... and in our pride- we did not scout in return.

We went into the championship happy, fat, lazy, and cocky.

It was a nip and tuck back and forth game.

I hit Mike Graham early on a wheel route and we seemed to be rolling.

But the machine team answered every score with a score.

They were running a GREAT defense.. it was a hustling, disciplined underneath zone that made it hard for me to squeeze in some throws.

I threw an interception in the 3rd quarter... my first one of the season.

Our defense held and we were holding a slim lead into the 4th quarter.

That is when I made the worst coaching decision of my life......

We had the lead with just a few minutes left to play... and we were facing a 4th and 12.

The rules called for a team to declare on 4th down whether they would 'go for it' or 'punt'- which was an automatic 35 yard run-off.

And like an idiot- I elected us to go for it.

I called a roll-out pass with Mike Graham running a comeback at the chains.

The other crowd erupted like they had won the super bowl.

Our defense came out a little dejected and the frat team scored almost immediately.

We got the ball back with very little time and... on 1st and 10 I threw my 2nd pick of the game... it was an amazing diving catch by their Strong Safety who had given me fits the entire game.

All they had to do now was run out the clock.

They snapped the ball.. the Qb held it and, instead of taking a knee, let Chris Lomabardo pull his flag.

Chris Lombardo called a time out and I saw the guys huddle.

FINDING A WAY TO WIN 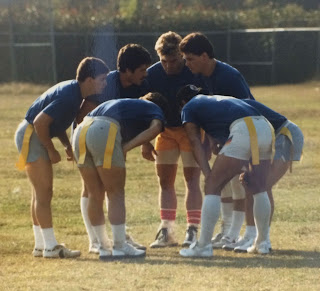 The next play will go down in lore and legend.

The next play.... with just a few seconds left on the game clock...

The center snapped the ball and Chris slowly walked up.. and non-chalantly went to pull the flag.. BUT instead of pulling the flag, he tipped the football out of the Qb's arms into his arms and ran down the sideline FOR A TOUCH DOWN!!!!

until the officials conferred....

and though there was no rule in the rule book... decided at that moment... that Chris had done an illegal play...

And that my friends all happened 30 years ago.... this fall. 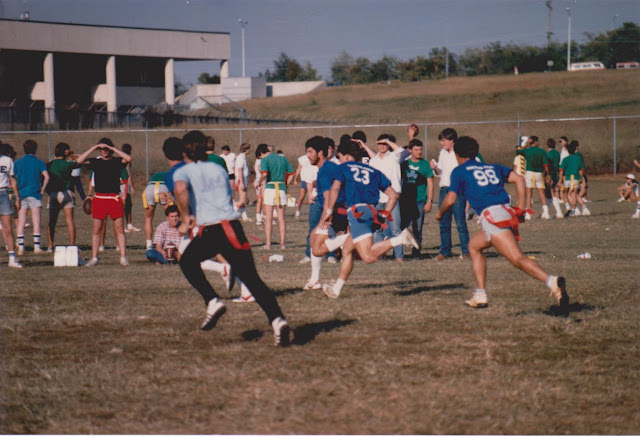 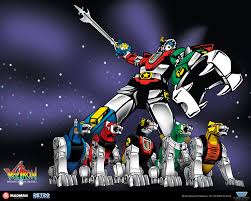