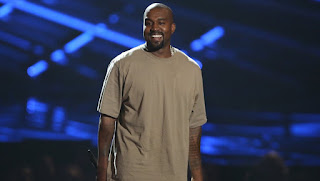 "I love love love white people but you don't understand what it means to be the great grandson of ex slaves and make it this far." Kanye West 2/15/16


I have been slow to write this and slower to post it.

There are so many hot-button issues in society today... but none seem to create the instant venomous animosity than opinions regarding racism.

We are as divided as ever. And I'm sad that we aren't even in a place for civil discourse.

When I read the news... it is easy to lose hope for a solution. In fact, the current line of thinking is that I don't have a right to speak on this subject because of my skin color.... but isn't that racist?

Here I am, a white man in the south, a child of the 60s- offspring of people who participated in racist thoughts and ideas. But I have rejected that notion- I honor Dr. King and I pray for our nation to somehow find racial healing and I hope for my children's sake to see an end to racial strife.

My grandfather was right in line with racially charged Jim Crow south. I heard the "n" word on a  regular basis growing up. My father was a Birmingham firefighter in the 60s- the infamous station #2 you see in the pictures. But early on, I knew that any decision about a person based solely on skin color was ridiculous. I credit that to the Southern Baptist church I grew up in, I credit it to the inter-racial schools I attended, and I credit it to athletics. Working, and sweating, and bleeding as a team brought us together regardless of our ethnicity- I truly believed we LOVED one another.

As a former literature teacher, I learned to love Dr. King's sermons. I loved reading Frederick Douglas to my students. I find it sad that Uncle Tom has such a bad connotation. He is one of the most godly characters characters in American Literature.

The first was echoed by Dr. King- he prayed and dreamed  for a land that discriminates only by character. The second demand is to realize that only Christ can end the strife.

So what does the gospel say to who have experienced the sin and pain of racism?


When we are most in the dark concerning God's dispensations, we must keep up right thoughts of God, believing that he never did the least wrong to any of his creatures. When we find it hard to understand any of his dealings with us, or others, we must look to general truths as our first principles, and abide by them: the Lord is righteous.

The history of the world sadly records MANY people mistreated simply for their heritage... including people of faith. The saddest tale of all are those who were abused in the NAME of Jesus...what a horror! But all suffering must be understood in the context of eternity.Think about the prophet Jeremiah for instance.....We often refer to this major prophet as the 'weeping prophet'. He prophesied to Israel during a time of their slide into deeper idolatry and violation of the covenant promises. Jeremiah's story is often told as one who had an early life of bliss but had to deliver the harsh messages from God which resulted in vicious attacks, even from his own family.Jeremiah experienced being beaten, threatened, put into stocks and deep wells, and he was wrongly accused at all times. He was told to not take a wife and avoid social activities that seemed celebratory. He was told to do these strange activities which symbolized the nation's sins. The sins were taking a toll on God's people, including famine and the fear of invading foreigners.But intertwined with all the darkness were wonderful words of hope. God promised to give a new administration of the Covenant of Grace which will be a new heart and new life.So as we read this major prophet, we are often faced with uncomfortable questions and some of the same attacks that Jeremiah heard on a daily basis- what are the wounded to do?THE GOD WHO PUNISHES AND AVENGES: The idea of the punitive God is frequently attacked. I am often thoughtful of Richard Dawkins' blistering description of God.

The God of the Old Testament is arguably the most unpleasant character in all fiction: jealous and proud of it; a petty, unjust, unforgiving control-freak; a vindictive, bloodthirsty ethnic cleanser; a misogynistic, homophobic, racist, infanticidal, genocidal, filicidal, pestilential, megalomaniacal, sadomasochistic, capriciously malevolent bully.

What do we do when we hear of this charge? I think there are a few important principles to keep in mind when facing this attack.A God without justice, is not worthy of worship. This is a VERY crucial point. The Bible does not lie- in the WORD, we are reminded what a hurtful world we live in. Human beings can be cruel. The history of man leaves a wake of brokenness and destruction. The reason we are repelled by the charges by Dawkins - because we see that evil on display by the acts of men.
I was helped greatly years ago by the argument made by Croatian Theologian Miroslav Volf (introduced by Tim Keller) who understands that only the certainty/hope of cosmic justice stops the cycle of violence created by human vigilantism and the blood lust of revenge. This is what every person who is angry over racism must do WITH THEIR ANGER......


My thesis is that the practice of non-violence requires a belief in divine vengeance…My thesis will be unpopular with man in the West…But imagine speaking to people (as I have) whose cities and villages have been first plundered, then burned, and leveled to the ground, whose daughters and sisters have been raped, whose fathers and brothers have had their throats slit…Your point to them–we should not retaliate? Why not? I say–the only means of prohibiting violence by us is to insist that violence is only legitimate when it comes from God…Violence thrives today, secretly nourished by the belief that God refuses to take the sword…It takes the quiet of a suburb for the birth of the thesis that human nonviolence is a result of a God who refuses to judge. In a scorched land–soaked in the blood of the innocent, the idea will invariably die, like other pleasant captivities of the liberal mind…if God were NOT angry at injustice and deception and did NOT make a final end of violence, that God would not be worthy of our worship.


The gospel is the only hope...

It breaks the heart of the slave owner- John Newton and makes him cry out the song Amazing Grace.

The gospel compels William Wilberforce to spend his entire life fighting slavery and was finally able to see it abolished in England in 1833.

The gospel drove Lincoln to fight his own countrymen so that all men could be free.

The gospel constrained Dr. King to seek change in non-violence and love in the face of evil.

The gospel is what Jeremiah Castille shared with my dad... a Birmingham Firefighter- and allowed his heart to embrace him and his message.

The gospel convicts the sinner and gives the oppressed a chance to forgive.... and losing that bitterness actually saves them in the long run.

I do worry that it is no longer about equality- but about superiority- and nothing less than a pound of flesh will satisfy.

That is NOT the gospel.

It is right to speak up and stand up.... but it is not right to destroy.

No one is allowed to be a bigot or racist at the foot of the cross.

Jesus paid it all..... and He did it for ALL skin colors.

Ultimately, He is the only life that matters.......

Hear Him in Matthew 5:

43“You have heard that it was said, ‘Love your neighbor and hate your enemy.’ 44But I tell you, love your enemies and pray for those who persecute you, 45that you may be children of your Father in heaven. He causes his sun to rise on the evil and the good, and sends rain on the righteous and the unrighteous. 46If you love those who love you, what reward will you get? Are not even the tax collectors doing that? 47And if you greet only your own people, what are you doing more than others? Do not even pagans do that? 48Be perfect, therefore, as your heavenly Father is perfect.
Posted by Jayopsis at 2/16/2016 05:29:00 PM