The Only Government and The Only Hope: Christmas in Isaiah 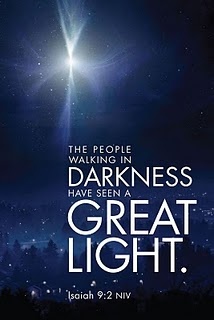 Isaiah spoke these words almost 700 years before the Nativity.
And the hope and light shines even brighter today!

Ancient Israel had no clue what the Messianic passages meant.

But we see it in brilliant clarity today!


For to us a child is born,


to us a son is given;
and the government shall be upon his shoulder.

The hope and joy of Christmas can often be lost in a world of turmoil and anxiousness.

And it doesn't take but 2 minutes of cable news to be thrown headfirst into turmoil, disillusionment, and the dramatic conflict of factions.

The America I grew up in is divided and struggling.... growing distrust between races, political persuasions, broken families, and a stagnant economy have even our children projecting a future full of gloom and doom forecasting.

The right longs for another Reagan while the left seems unabated in a desire to reshape the landscape on multiple levels.

Is there a route out? In a culture full of division, gun violence, flat wages, and global insecurity- how can we avoid what seems to be a perilous path of extinction?

Well, if I might offer a historical perspective.... things have been much worse in global history, and may get much worse in American history, but in the end we can always celebrate the Christ-child.

Jesus is NOT an American... He is the King of the Universe.

When Isaiah was inspired to communicate God's message, he was watching the decay and ruins of the once grand and unified Davidic Kingdom.

But after the death of Solomon, the nation of Israel divided... and in division, destruction soon followed. The Northern tribes fell first and the South (including Jerusalem) was seeing and hearing the advancing threat of the Assyrians and eventually the Babylonians.

It was a gradual ruin.... but in the midst of the fear, violence, decadence, and idolatry.... God was never shaken off of His throne!

See how the promise of God's solution is our only true hope:
(Isaiah 9:2-7 ESV)

[2] The people who walked in darkness have seen a great light; those who dwelt in a land of deep darkness, on them has light shone.

The world has not changed..... darkness and light. As long as we live under the oppression of sin and the lure of idols... we are in the dark.

But there is a light... and when we see Him, we are liberated. Death becomes life, night becomes day, hunger and thirsts are quenched, despair breaks into joy, ....

700 years ago, as David's light seemed to be a distant memory of glory days gone by...Isaiah promised on God's behalf, on the stake of His name... a return to prosperity.

(because it was dwindling- yet Abraham was told of increase)
you have increased its joy; they rejoice before you as with joy at the harvest, as they are glad when they divide the spoil.

(prosperity that is a shared prosperity..not under compulsion, but of love and compassion)
[4] For the yoke of his burden, and the staff for his shoulder, the rod of his oppressor, you have broken as on the day of Midian. [5] For every boot of the tramping warrior in battle tumult and every garment rolled in blood will be burned as fuel for the fire.

(the overcoming of all enemies- an end of war)

[6] For to us a child is born, to us a son is given; and the government shall be upon his shoulder, and his name shall be called
Wonderful - too wonderful for words

Prince of Peace- Cast all your anxieties on Him!
[7] Of the increase of his government and of peace there will be no end, on the throne of David and over his kingdom, to establish it and to uphold it with justice and with righteousness from this time forth and forevermore.

AND FINALLY- look at the ending phrase here- why and how and by what means....
The zeal of the LORD of hosts will do this.

God is the type A, energized, never resting architect of a new world!

Wow- what a promise! Dr N. T. Wright, preached a homily at the Midnight Eucharist on Christmas Eve 2008 in the Cathedral Church of Christ, Blessed Mary the Virgin and St Cuthbert, Durham on this very passage.

I find a few of his comments 'prophetic'.


The whole world was hungry for hope, and now Obama, who is indeed brilliant, charming, shrewd and very capable, is being told that the government of the world is upon his shoulders, and we expect him to solve its problems.


Poor man: no ordinary mortal can bear that burden.


Nor should we ask it of him. The irrational joy and hope at his election only shows the extent to which other hopes have failed, making us snatch too eagerly at sudden fresh signs. And that can only be because we have forgotten the Christmas message, or have neutered it, have rendered it toothless, as though the shoulder of the child born this night was simply a shoulder for individuals to lean on rather than the shoulder to take the weight of the world’s government.


Why was he born in Bethlehem? Luke tells us: because the then global superpower wanted to raise taxes, so told everyone to sign up and pay up. That’s how the Middle East worked then, and, with minor adjustments, that’s how it works today.


We are today hungry for exactly that difference, and Christmas night is the time to ponder it.


Christmas is all about the coming of the world’s true king, the one who stops wars, who forgives debts, who establishes true justice and judgment in the earth.


I told you Isaiah is pretty neat at Christmas time!