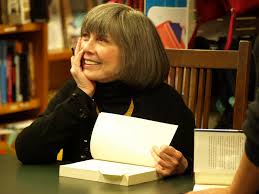 In 2009, I read Anne Rice's auto-biography:  CALLED OUT OF DARKNESS: A Spiritual Confession. It had a deep resonance with my heart!


My first experience with Anne Rice was around 1998 when I finally read "Interview with the Vampire". As a boy, I loved monster stuff (Dracula, werewolf, Frankenstein) and had heard a lot of praise for the Vampire Chronicles.


As I read the book, I was totally absorbed and very impressed. At the same time, the novel captures a presence of evil unlike anything else I have ever read. Not that I was repulsed by it, I was actually impressed by it. It was the truth of it that caught my attention- this work of supernatural fiction regarding the tragic life of godless vampires captured the tragedy of it all in dazzling images and fast moving narratives.


Knowing a little of Louis and Lestat, it was delightful to read of Anne's return to the faith and mesmerizing to read her life story. It is also comforting to know that the proverb is indeed true: 'Train up a child....'


I encourage this book and after reading it, I was especially gratified how Scripture captured her mind and shaped her theology.


I highly recommend this excellent story of life and faith. Here are some of her comments:


For more than twenty centuries, Christianity has given us dazzling works of theology, yet it remains a religion in which the heart is absolutely essential to faith.


The appeal of Jesus Christ was first and foremost to the heart.


So here is the story of one path to God.


The story has a happy ending because I have found the Transcendent God both intellectually and emotionally. And complete belief in Him and devotion to Him, no matter how interwoven with occasional fear and constant personal failure and imperfection, has become the true story of my life.


What strikes me now as most important about this experience is that it preceded reading books. Christians are People of the Book, and our religion is often described as a Religion of the Book. And for two thousand years, all that we believe has been handed down in texts.


It’s important to stress here that my earliest experiences involved beauty; my strongest memories are of beautiful things I saw, things which evoked such profound feeling in me that I often felt pain.


In fact I remember my early childhood as full of beauty, and no ugly moment from that time has any reality for me. The beauty is the song of those days.


I vividly remember knowing about God, that He loved us, made us, took care of us, that we belonged to Him; and I remember loving Jesus as God; and praying to Him and to His Blessed Mother, the Virgin Mary, when I was very small."

Anne is very honest in her struggle with faith. She writes about the progression:
She saw ‘good people’ with no faith.
She had a desire for modern world.
She had a conversation with priest- “He just said, ‘You are catholic- there is no life outside catholic church’.
Her heart wanted to explore.
She then quit the church and she stayed away.... for 38 years!
Never prayed to God about it.
She stopped talking to God.
God could not have made a church so fragile- vulnerable to information- 'churches told you lies.'
Rice writes ‘Interview with the Vampire’- ‘an obvious lament for my lost faith’


Before long though though.... her Atheism Begins to Crack


She began to study history- the more she studied history- ‘the more my atheism became shaky’- particularly the survival of the Jews-
She went back to New Orleans and found the Catholics warm and receiving
Struggle was waging- atheism held firm, but questions were coming up.
She then took trips to Europe and Holy Land. She found the Statue of Jesus at Rio de Janeiro " a spiritual experience".


Atheism was cracking…”I was losing faith in nothingness”

She saw people committed to ‘good’- ‘NO ONE WAS INDIFFERENT to conscious or to acute moral responsibility’.

Creation was speaking to me- the music of a violin sang to me of God-
Jesus weighed on her.. ‘He started a worldwide religion’ Why was America obsessed with Jesus- he was on their lips- Why was His name the most common curse word I heard?


FINALLY she gave in to something deep… I loved God..I loved Him in Jesus… I wanted to go back.


“In the moment of surrender, I let go of all the theological or social questions which had kept me from Him for countless years. I simply let them go. There was the sense, profound and wordless, that if He knew everything, then I did not have to know everything, and that, in seeking to know everything, I’d been, all of my life, missing the entire point.”


“And it was His knowing that overwhelmed me….His was the Divine Mind that made snowflakes, candle flames, birds soaring upwards…


And why should I remain apart from Him just because I couldn’t grasp all of this? He could grasp it. Of course!”

There was a big change in Anne after this surrender..... but it was real life and never easy.


She decided to write only for God. And then she had to deal with the harsh reality when her husband died of a brain tumor.


“ But it was the Incarnation- Jesus becoming flesh-" that resonated the most... “You became a child for me”


“Not only do I find no evidence for isolated Gospel communities, but I see no collaborative writing in the gospels at all.”

The interplay of simplicity and complexity seems to go beyond human control.


She finds many Christians full of love, but also full of division- and that is is hurting the church.

"This book is about faith in God.

“It isn’t simply finding skeptical New Testament scholarship so poor, so shallow, so irresponsibly speculative, or so biased. That has indeed been the case.

"I am broken, flawed, committed: A Christmas Christian searching for that stigmata, for the imprint of those Wounds on my heart and my soul, and my daily life.”


May Christmas has its intended impact on those who have become distant to their loving, heavenly Father!
Posted by Jayopsis at 12/15/2015 06:34:00 AM