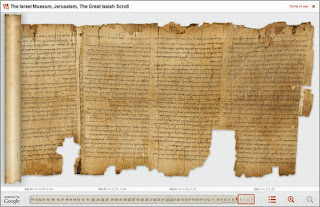 I have admired the Book of Isaiah for so many years. Though not always pleasant to read, it seems like every section has solid, deep, concrete content written in stylistic and literary excellence.

The more I study the Book, the more convinced I am that the first 5 chapters of Isaiah represent a type of prologue, introducing the main themes of Isaiah's 50 years of prophetic and faithful ministry.

After the prologue, in CH. 6 we meet the man Isaiah and his powerful vision of Christ that marks his call and commission as a prophet.

If you have ever been to a musical, you know the importance of a prologue. It is that part, before the curtain opens, where all of the music that will come later is introduced to the audience. It brings memories to those who know the musical, and it tunes the ears of those who are new.

I attended a high school presentation of Roger's and Hammerstein's Cinderella last year. It is quite different from the Disney version. I had not heard those songs for a number of years, but when my daughters were young, we watched the video quite often.

Sitting in the audience that night, our excellent orchestra hit a few bars of each of those familiar songs... and though I had not heard them in years, I immediately remembered the lyrics and tunes and was looking forward to hearing them in a fuller sense later.

This is what you get in the first 5 chapters of Isaiah- a prelude to the great Book:

The word translated "Ah" in 1:4 communicates both a warning and a lament. Over and over, you have this promise from God to judge sin, but it is not capricious, careless, or without feeling. In fact, God presents Himself as a father who has to give grievous consequences to a loved, but wayward son.


A Foolish and Rebellious Nation

Judah and Jerusalem is thoroughly convicted of forsaking God and breaking His covenant promises.
And the worst part of it is that they suffer the results of their own choosing.  5:4 'for they have rejected the law of the Lord of hosts, and have despised the word of the Holy One of Israel." And the result?
Rebellion- Laden with iniquity- Sickness - Desolate and burned out- over thrown- ritualistic religion that is of no value- violence- oppression- sexual immorality- crime- loss of leaders- back room bribes- mysticism- syncretism with foreign gods- greed- pride- injustice- famine- depression- lack of discretion- decay- addiction- substance abuse- false witness- calling evil good and good evil- and a coming army of invaders.

The Sin of Pride

Pride/Arrogance/ and Haughtiness seems to rise in the ashes of sin and rebellion like an especially wicked attribute with an equally strong response from the Lord.

Several times the Lord has Isaiah write: "Man is humbled and each one is brought low."


The Sin of Idolatry

Idolatry is when anything other than God is elevated to an ultimate thing. You get introduced to forms of idolatry in the first 5 chapters (fortune telling, alcoholism, consumerism) but this theme isn't as clear until later on. In Ch. 6, you get the eventual impact of idolatry- sensory organ malfunction- blind eyes, deaf ears- as part of Isaiah's calling. But the sin of idolatry ranks up there with pride and will be expounded on later in the 66 chapters of the Book.

The Woes of Life When God is Forsaken

This one is clearly spelled out in Ch. 1-5. The word woe is used 9 times and outlines how difficult life in when one is weighed down in sin. Isaiah 5 has a particularly poignant verse 18:

Woe to those who draw sin along with cords of deceit, and wickedness as with cart ropes,

The prophet himself will utter "WOE" when he sees the high and lifted LORD.

It is scary when God closes the door of mercy and says, "No more delay".  Though it may not be as suddenly as we suspect- he pronounces it at it WILL come.
And the process is something like this:


JUDGEMENT- all warnings are over. He will now keep His word.
ABANDONMENT- a withdrawal of His divine protection and provision
FAMISHED…..FAMINE- the decay is gradual, but evident. Signs of cursing grow exponentially.
WEAKNESS- No leaders, no fertile land, no productivity
OVERTHROW- In comes the invading army- hungry, disciplined, and destructive.


The Promise of Salvation

But the promise of salvation- even if to a remnant remains......

There are beautiful passages of the future kingdom to those who remain.


CH 1
“Come now, let us settle the matter,”    says the Lord.“Though your sins are like scarlet,    they shall be as white as snow;
though they are red as crimson,    they shall be like wool. If you are willing and obedient,    you will eat the good things of the land.

CH 2
“Come, let us go up to the mountain of the Lord,    to the temple of the God of Jacob.He will teach us his ways,    so that we may walk in his paths.”The law will go out from Zion,    the word of the Lord from Jerusalem. He will judge between the nations    and will settle disputes for many peoples.They will beat their swords into plowshares    and their spears into pruning hooks.
Nation will not take up sword against nation,    nor will they train for war anymore. Come, descendants of Jacob,    let us walk in the light of the Lord.

CH 4
In that day the Branch of the Lord will be beautiful and glorious, and the fruit of the land will be the pride and glory of the survivors in Israel.  Those who are left in Zion, who remain in Jerusalem, will be called holy, all who are recorded among the living in Jerusalem.  The Lord will wash away the filth of the women of Zion; he will cleanse the bloodstains from Jerusalem by a spirit of judgment and a spirit of fire.  Then the Lord will create over all of Mount Zion and over those who assemble there a cloud of smoke by day and a glow of flaming fire by night; over everything the glory will be a canopy.  It will be a shelter and shade from the heat of the day, and a refuge and hiding place from the storm and rain.