Grace in the Shadow of Judgment: Isaiah CH 6 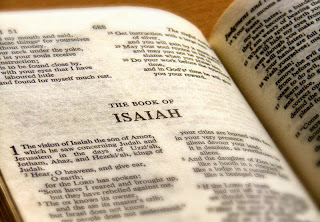 Continuing my study of Isaiah

In the year that King Uzziah died,

This is 740 BC and we read about King Uzziah in II Chronicles 26. He was a good king. He ascended the throne at 16 and reigned 52 years. He led in such manner as the Lord prospered him. Under his rule, Jerusalem became rich and powerful. But just as Judah had done in Ch 1-5- Uzziah becomes a tragic, real life symbol of a fall. Uzziah, in haughtiness, entered into the temple and tried to burn incense. He was confronted by the high priest and 80 other priests. Uzziah, full of pride and now anger at the confrontation stretched out his hand in defiance and was struck in leprosy. He had to be exiled and lived the rest of his life as an outcast.

Many scholars agree that Isaiah and Uzziah were related. I tend to see this chapter ( and some of it is speculation) as Isaiah grieving over the fall of this great King and kinsman. Possibly compounding his despair over the decay of culture as well.

But in this time of darkness (remember the end of CH 5:30b "behold, darkness and distress; and the light is darkened by its clouds.") Isaiah is given a bright light to say the least.

I saw the Lord, high and exalted, seated on a throne;

The Lord (Adonai- ruler/ in authority) is on the throne. It is like The Lord shows Isaiah....yes, the earthly throne is in chaos- but I am still in control.

How could Isaiah 'see' the Lord? The Bible indicates that no man can see God and live. This is a Theophany or more precisely, a Christophany- see the vision of Christ in Rev 1 and the description of the heavenly throne room in Rev 3/4 for parallel comparisons.

The best argument that this 'Adonai' is the transfigured Christ is found in John 12: 37-41. After quoting Isaiah, John writes, "Isaiah said these things because he saw his glory and spoke of him ." I believe the pronoun refers to Christ.

God reveals Himself in ways to us to grasp the ungraspable and perceive the unperceivable. For example, the TRINITY is mysterious, but gives us some handles understanding the transcendent. This is likely a 'vision'- but it is real and represents and even greater reality.

and the train of his robe filled the (temple).

The longer the train... the greater the King. This train fills and is ever filling the temple/palace.

The Bible clearly divided the King from the priest in man's government.... this is what Uzziah's act violated. BUT IN CHRIST- He unifies the office of Prophet, Priest, and King.

Seraphim are 'burning ones'- blazing heavenly creatures- but notice that the HOLINESS and BURNING of Adonai even affects the seraphim. They cover their faces......even they cannot look at such. They cover their feet (Moses, take off your sandals, in front of the burning bush) and they fly (hovering...but not touching). We treat holy things with way too trifle a manner.

And they were calling to one another:
“Holy, holy, holy is the Lord Almighty;    the whole earth is full of his glory.”

We know this- THIS IS THE ONLY THRICE USED ADJECTIVE phrase in the Bible. There is pit/pit in Genesis, gold/gold in Solomon's temple, peace/peace in Isaiah 26, truly/truly in New Testament... but only GOD"S HOLINESS is 3 fold.

There are two aspects to holiness. "Alien" or nor like us or TRANSCENDENT. God is not like us and the more we get a picture of how big and awesome He is- the better it is for us. This is the Creature/Creator distinction that Dr. Van Til so often referred to.

A second aspect of holiness is purity. But we cannot even contemplate how pure is this purity. We can only think of it in a negative sense... without sin- but this does the idea no real justice.

At the sound of their voices the doorposts and thresholds shook and the temple was filled with smoke.

Earthquakes, fire, smoke are frequently linked to the presence of God among men. Oh that the Lord would us shake and be on fire for Him!

The very first recorded words of the prophet... "WOE" is me. The word woe has already been used multiple times in the first 5 chapters. We often see it in relation to the sin of others... but it is most applicable to the sin in our lives. This is the 'best' woe...one that creates true contrition and humility.

This is a natural response when men encounter the living God. They fall to the ground. Think of all the great Biblical heroes who were 'knocked down' in humility to be picked up by the Lord for great ministry. Jacob walked with a limp after losing his fight with the Lord. Moses was resigned to 40 years in the wilderness and had a lowly estate when the bush began to burn. Peter fell to the ground and exclaimed "Depart from me, Lord, I am a sinful man.". Paul was struck down and blinded.

In this world of lifting self esteem and avoiding hard truth- the Bible is very counter-intuitive. An exalted man sins... a humble man serves the Lord for much good.

Then one of the seraphim flew to me with a live coal in his hand, which he had taken with tongs from the altar.  With it he touched my mouth and said, “See, this has touched your lips; your guilt is taken away and your sin atoned for.”

On this declaration of contrition- the burning one 'flies' to Isaiah. God is quick to apply mercy and He rushes to the truly repentant. But notice.. GOD initiates the process. He revealed Himself and He applies the grace. All Isaiah added to justification was sin.

This is why I titled this post: GRACE in the SHADOW of Judgment. God's grace is most fully applicable when His transcendence/majesty/holiness most manifest. The greatest love verse in the Bible is in context of eternal judgment- For God so loved the world that He gave His Son that whoever believes in Him WILL NOT PERISH but have eternal life.

Of course it is also noteworthy how thorough the cleansing is- Your guilt is taken away and your sin is covered (atoned for). WOW- what a gracious Savior!

God's mercy is applied by the initiation and act of God. Isaiah responds to grace by a willingness to now cooperate/serve God.

Then I heard the voice of the Lord saying, “Whom shall I send? And who will go for us?”
And I said, “Here am I. Send me!”

We do not believe in faith plus works to merit salvation... we believe in a grace THAT works.
James and Paul were not opposites... they were unified. Look at Ephesians 2:8-10

8 For it is by grace you have been saved, through faith—and this is not from yourselves, it is the gift of God— 9 not by works, so that no one can boast. 10 For we are God’s handiwork, created in Christ Jesus to do good works, which God prepared in advance for us to do.

Do I say to God- Here I am, send me? If not, I need more grace, I need to see God and His holiness more, OI need to pay much closer attention to my salvation....

Then we see this strange ministry that Isaiah is called to:

He said, “Go and tell this people:

WHAT? G.K. Beale has long helped us to understand this language. In the Bible, sensory organ malfunction (that is figurative) is always in context of idolatry. It is the natural result of idolatry to become blind and deaf, hardened and more lost.

We see this very clearly in Isaiah 42 and 44- Psalm 135 says that we become like the idols we worship. Beale states it this way: What we revere, we resemble, either to ruin or to restoration.

The people of God have forsaken God and now have become like their idols- deaf, mute, blind- of no use at all.

And now, the judgement that God promised in Genesis, in Deuteronomy, all throughout the institutions of the covenant is now going to be certain in the course of Isaiah's 50 years of 'ministry'. He is going to preach and have a 90% failure rate.....

Then I said, “For how long, Lord?”
And he answered:
“Until the cities lie ruined
and without inhabitant,
until the houses are left deserted
and the fields ruined and ravaged,
until the Lord has sent everyone far away
and the land is utterly forsaken.
And though a tenth remains in the land,
it will again be laid waste.
But as the terebinth and oak
leave stumps when they are cut down,
so the holy seed will be the stump in the land.”

Dr. Ortlund speaks of how this hardness takes root:

Every time you hear the word of God preached- you come away from that exposure either a little closer to God or a little hardened- but you are not the same.
The same message that is enliving you to Christ is hardening someone else. James 1:21 “Receive with meekness the implanted word, which is able to save your soul”

“If your heart does not leap at God’s grace in Christ- what you need is more grace. Nothing can save us from our own deadness. We should fear the hardness of our heart more than anything else. Beware of rigidity, beware of a demanding spirit- beware of an unmelted heart that is NEVER satisfied- beware of a mind that that looks for excuses to not believe- beware of the impulse that always finds a reason to delay a response- beware of thinking how a sermon applies to someone else-

Is 66:2 But this is the one to whom I will look: he who is humble and contrite in spirit and trembles at my word.

I can't imagine what it would be like to be Isaiah. For 50 years, you were going to pronounce judgment over a proud and prosperous nation who were blind to the truth. Extra-biblical accounts say that he was sawn in two as a result of this 'preaching'.

Even though King Uzziah died in 740 BC- the actual destruction and exile did not happen until 606 B.C. Like the days of Noah, the people would not listen. Just as the parable of Jesus, they will not believe even if someone were to rise from the dead.

Where are we today?

Remember WHY God said the land was going to be laid waste?

Isaiah 5:24(b) "for they have rejected the law of the Lord of hosts and they have despised the word of the Holy One of Israel".

Oh Father, please apply your mercy. May we see you and humble ourselves. May we find more grace to soften our dead hearts and our idolatrous ways. May your word be accepted and not rejected. May we love and not despise your truth! Please shower more grace because we see the clouds of judgment gathering!
Posted by Jayopsis at 10/09/2013 10:50:00 AM