The Iceland Volcano- Past, Present, and Future

Look at the image below, taken during the recent- world disrupting volcano in Iceland.
It is an awesome display of beauty and power! 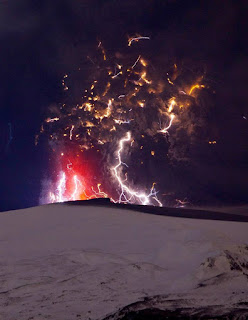 This event has meaning past, present, and future.

The Past: 2300 years ago a Punic warrior named Hamilcar had his 9 year old son put his hand on a sacrifice and vow a lifelong hatred of the Romans. His son was named ;"Blessed by Baal". It can't be proven, but it is possible that this was a child sacrifice to the mountain god of fire and thunderbolts. Based on urns dug up in the Valley of Tophet, sacrifice of a first born to Baal was done by the thousands. This young boy could have been a surrogate, being offered in his stead.
This boy was the warrior Hannibal- who may have been motivated in his travel over the Alps to invoke the blessing of Baal in his quest to carry out his vow to his father.

Compare this to Abraham, as Jehovah called him to take his only son- the miracle child of promise- up the mountain for a sacrifice. And the God of Israel showed a counter way. God himself would provide the sacrifice.

Think of Elijah- mocking the prophets of Baal- and then seeing God bring fire from heaven on the sacrifice to Jehovah. Wouldn't it be ironic if this were a mighty lightening strike- a final blow to the false prophets?

The Present: Every time a cataclysmic event like this happens, do you pause and think that there may be a message in the event. Whether it is the towers falling on 9/11 or the Tsunami washing away life, what do we do with the sheer power and unpredictable nature of this kind of fury?

Most of us ask, why did God allow this? It is interesting what Jesus said in Luke 13 about the Galileans who were executed or the victims of the tower collapse in Siloam. He basically says "Don't ask if this happened because their sin was worse that others", instead ask, "What would happen to me if I were taken out like this?" Jesus says this is a call to repent- the day of mercy is open still.

Rev 6:12 I watched as he opened the sixth seal. There was a great earthquake. The sun turned black like sackcloth made of goat hair, the whole moon turned blood red, 13and the stars in the sky fell to earth, as late figs drop from a fig tree when shaken by a strong wind. 14The sky receded like a scroll, rolling up, and every mountain and island was removed from its place.


15Then the kings of the earth, the princes, the generals, the rich, the mighty, and every slave and every free man hid in caves and among the rocks of the mountains. 16They called to the mountains and the rocks, "Fall on us and hide us from the face of him who sits on the throne and from the wrath of the Lamb! 17 For the great day of their wrath has come, and who can stand?"

When I read the imagery of the 6th seal- I think of a volcano. Maybe it was Mount Vesuvius in AD 79. A lot of Revelation is attached to the date it was written. Before AD 70 makes most of the visions applicable to the destruction of Jerusalem by the Romans in AD 70. A later date puts the visions more futuristic and either symbolic or literal depending on your millennial view.

If you want a further discussion of my take on Revelation please look over my past blogs or write me and I will send you my CD series 'Meditations on Revelation'.

When these 'signs' show: war, earthquake, famine, natural disasters- ask yourself... Am I ready to meet The King?


No one knows the day, but IT WILL happen. We got the first coming of Christ wrong... I know we can't predict the 2nd Coming. Just live each day like it could be today. And be thankful for the forgiveness and grace offered in the Lamb of God.

Look back at the picture and pause. The God of this beauty and wonder offers freedom from wrath and justification from sin, and an adoption sealed in precious blood.

Let's stay awake and alert, God is speaking and we cannot ignore the message. 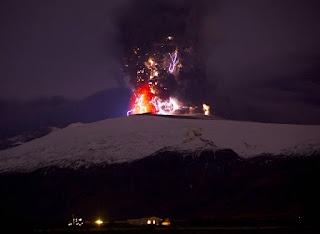