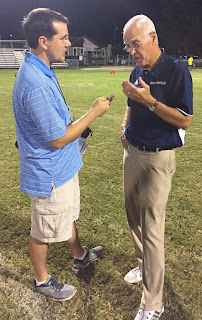 Longtime coach and friend, Shane Harmon, tapped me on the shoulder right before kick-off last night and said, "Did you know tonight could be Fred's 300th?"

And as a guy who takes GREAT PRIDE in knowing things and doing what is right... I felt a huge sense of panic.. NO... I didn't know and NO... I wasn't prepared to honor my friend on such a historic milestone for this guaranteed future Hall of Fame coach.

I do know he got his 250th BCS win last season and was given a nice ceremony and a gold helmet with 250 painted on it.....

So I wandered out to him during the humid pre-game warm-up and asked him if he knew he was at 299...he did.

Don't get me wrong, we know it is special, but I have spent too much time with him over the years to know that the accolades don't register for him... but I also know it was pre-game and the fires were burning... he would trade them all to get the NEXT one.. and not for him... not for him... he WILLS the wins for one reason.... he feels like he OWES it to the kids. He wants it so bad for them that he aches... but the reason he aches for them may surprise you.

WHAT IS 'YANCEY MAGIC'?

Those of you who know my story, know that I coached football for 28 glorious years... all but 7 of those with Coach Yancey.

But it was my 7 seasons as a head coach that I really understood Yancey magic... it was why his 2 pt calls worked and mine didn't, why his fake punts scored and mine fell short.

There is no Yancey magic... He is just a humble servant of God, loving kids, and has a burning fire for winning.. for all the right reasons.

Don't get me wrong.. He is a fantastic coach.. excellent x's and o's... but there is something more and deeper... and it is why his former players and parents LOVE him.

Oh my goodness... does anyone know what an accomplishment this is?

It isn't just perseverance, it is a long time of excellence.

When the game was over.. I hugged his neck and congratulated him... "Congrats coach, 300 is special." He squeezed me extra hard... 'You know you had a big part of this, coach."

And the tears filled my eyes.... he NEVER is selfish... he always deflects to others...

and I'm still crying now.. because I can't stop praising the Lord for allowing His grace to make a man/coach like Fred Yancey.

BCS Coach, Fred Yancey won his 300th game as a head-coach and the 259th at Briarwood – a school and Shelby County coaching record- last Friday night at Fairfield.

Coach Yancey, who ranks third in AHSAA history with most wins at one school, has guided the Lions to 24 straight playoff appearances. He has a 54-22 playoff record and has won 3 state championships.

Throughout his career, Coach Yancey has modeled a consistent Christian testimony and taught countless players and students how to be a winner on the field and in life.

So grateful my children had the opportunity to cheer and play for this man of God. He exemplifies wisdom and humility! I remember, when I was teaching at Briarwood, having to send a student to his office. (He was the principal and also the head coach at that time. ) He came to me afterwards and told me that he was sorry that student disrupted my class and he would make sure it didn't happen again, and of course he made sure the student told me the same thing! Wow! He made time out of his busy schedule to make sure I knew that he cared! That's just the man he is! Thanks Coach for loving others so well!! Leigh Johnson