Early Analysis of the Tide 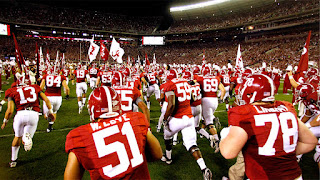 I had an amazing time last weekend in Tuscaloosa. The Alabama game day experience is incredible and any chance we get to do it, we always enjoy it.

Also loved my view- A high endzone seat is great for an old coach like me and I love finally watching formations and safety rotations from both teams. It also helps to get some thought on the chess game of adjustments and personality of the play callers.

It is just too early to accurately get a team report. I'm a guy who likes to see what teams grow during a season and how they handle the grind, injuries, internal chemistry, and outside messaging.

But here are some of my take aways from a beautiful day in Alabama:

As my blog post said a week ago, Hurts is dramatically improved. His poise is his greatest asset, he plays under control and makes good choices which is hard to do in the pace of a game. He seems to have a great time clock on his scrambles and is deadly with his feet.

He threw two bad balls (which is a great game number). Two weeks in a row he has had a vertical throw go out of bounds, which was always a big no/no to me. But his second deep throw to the right was just a bad decision and a bad ball. In cover 1 (man free) the Qb needs to be aware of the FS, and Hurts threw a hang up too far inside and it should have been picked.

DO WE KNOW DABOLL YET?

As far as 'plays', Alabama has shown nothing new from last year. It is what most teams do these days... a lot of gun, formations, shifts, motions, and personnel packages. Alabama loves to run the power O or Pin and pull off of jet sweep motion. The do some RPO's that are fast screens or runs. They do some zone read, but they also have called QB runs.

My guess is that there are some plays still in the toolbox but yet to be used, which is a beauty of this year's schedule-

The game tapes are flooding in... and before long, every team will have an MO and though you try to break tendencies, you still go with what you are good at-

Here is where Daboll will excel- an NFL approach is the be as basic as you need to be to get the job done. The game plan is more clinical than mood of the moment.

I had a lot of chats with Norm Chow when he was coordinating with the Titans... he said he was most surprised with 2nd and short yardage philosophy between the colleges and pros. In college- 2nd and 2 is a 'shot down'- get a big play. In the NFL, it is 'get a 1st down' call- because 3rd and 2 in no gimme in the NFL.

Daboll went power run on most of his 2nd and shorts.

I like what he is doing.... not flashy but efficient- very clinical and sound- and we are snapping the ball in plenty of time- there won't be the 'whistling Kiffin' wanting to check to HR throws - but in the long run, that approach can cost you some opportunities.

I haven't seen that slot- possession receiver yet- the one we will use to play off of Ridley- Who will be our Amendola?

I was impressed with Fresno States offensive gameplan. This was a well schemed offense and had yin plays in for Bama's yang.

I did notice that the 2nd time the play was called- Bama had already adjusted... it was especially cool to see when Fresno called Chip Kelley's rail route flood play- it was a big gainer the 1st time and 2 yds the 2nd time.

I do think Bama's defense wasn't stoked- they played a lot of 'catch the block' instead of 'attack the technique" and it allowed runs to go two more yards or give QB one more count in the timeclock to throw.

The chewing by Pruitt was expected, justified, and predictable - as all DC's are LOL.

FG kicker seems to be settling down- he seemed jittery in game 1.

Our punter is something else- Jk Scott.... fun to watch him- his apex on the punts is just how you want them.

The Fla State win is money in the bank- and despite HUGE losses at the OLB position, a place like Bama has TIME now to build.

And that my friends is what the whole season now depends on... and there are NO GUARANTEES that it will happen. Even though the head coach and the system is as outstanding as it can be, it is now up to the players to lead, work, and compete.

A championship team will block out the outside noise and intensely focus in the film room and meetings, and relentlessly compete in the weight room, on the practice field, and on Saturdays.

There will need to be team leaders who demand it happen.....

Along the way, there will need to be injury luck and a will to win when the momentum shifts due to bad breaks.... etc.

I haven't seen last years D-line push- but rarely does that happen at that level... that is why those guys went so high in the draft.

And (this will sound crazy) but will the Bama Nation allow this team the time it takes to build?

All players are on social twitter and the noise comes in.... are the wins big enough? What player will be labeled as unproductive and get his mind on his performance and not the team? How loud is the doubting or dissension?

What will surprise everyone but me is how competitive CSU, Vandy, And Ole Miss will be.

For fans sleeping and lounging on the butterslide of expectations, it will be opportunities for fret.

But if the team will take these a moments to mend and opportunities to grow...we can continue to enjoy unprecedented achievements.

I do like the culture of my team and the way they play!