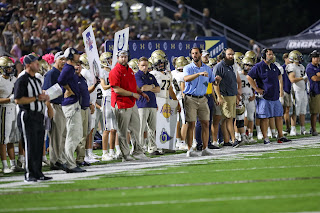 I have been thinking a lot lately about the strategy of signaling.
Getting the call into the offense is a balance of time, efficiency, accuracy, and security.

Former Alabama QB and kicker, Danny Ridgeway was Coach Bryant's messenger. He would run onto the field, tell the huddle, and run off to the sideline before the NCAA changed the rule that if a player came onto the field, he had to stay for a play.

I remember how Bob Finley, (the hall of fame high school coach of Hoover back when it was Berry High School) would have Stan White would run over after every play to the sideline and Coach would tell him the play and he would run back. There were no play clocks back then and I don't remember many delay of games.

Most teams used to (and a lot still do) run in the play with players from the sideline.

All teams had signals for 2 minute offense- but with the rise of no huddle teams which led to nascar pace teams created the need to signal.

Stealing signals is as old as baseball.

I know personally of coaches and games at both the HS and college level where a big part of the win was the stealing of either offensive of defensive signals from the sideline. All an offensive coach needs to do is know the coverage and whether the defense call is a base or blitz and you can scheme wise make a good call.

Of course, most offensive coaches today just check snap and look to the sidelines where the defense has tipped where it is anyway.

I do know of some teams who change or bluff change the defensive call after that.

Stealing an offense's signals requires a longer study but I know it happens.

I think teams who are vulnerable are those who signal all the time, even in pre-game, at freshmen games, at JV games, in 7 on 7 tournaments- if you watch a team for any length of time in those situations you will know their base runs- what are their runs, their slip screen calls (dangerous to get that one), their pass concepts, and their boots.

I have been coaching long enough to have run the gamet of how to signal.

We have used:
Problems with the 'systems'
SO what do I suggest?
Psychological Warfare:
If you play a team that signals and you can't break their code- act like you know their code- it demoralizes the other players. I had an offensive tackle in full bore panic one game because he said "THEY KNOW OUR SIGNALS!". Our guard looked at him and said, "No they don't, they have been saying stuff like that the whole time and mostly wrong"- but it did impact that player's confidence.
If you do crack the code- try to NOT SHOW IT- take the cheese all night without ever displaying that you know where it is.
Finally, there is the story of Tennessee playing UCLA one year where the offensive line coach from UT had gone to UCLA. It caused a debate among the UT coaches of whether or how much to change checks and calls because UCLA would know a lot about their language and signals.
Coach Cutcliffe and the staff decided to do nothing different and it stayed that way for 3 quarters. But in the 4th quarter, Peyton Manning checked to the quick game hitch like they had done ...forever. But the coaches, counting on a steal, had instructed to run a double move, hitch and go.
Sure enough, The Bruin corner bit hard and the UT receiver scored the game clinching TD.
You better be careful- LIVE BY STEALING THE SIGNALS, DIE BY STEALING THE SIGNALS.
I DO GET JEALOUS OF THE HELMET RADIOS IN THE NFL- THAT WOULD MAKE LIFE SIMPLER.
Hope this discussion helped stir some ideas...what do you think?
Posted by Jayopsis at 3/07/2022 01:37:00 PM