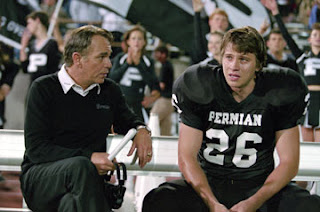 Hollywood normally does not treat coaches well in movies. There are exceptions of course, but many of the early 'football' movies in particular that I experienced in my developmental years tended to portray coaches in a negative light.

A little more recent example was the 2004 film, Friday Night Lights, based on the book by the same title. The film is based on the Permian High School program and the iconic head coach is played by Billy Bob Thornton. The final locker room speech is a great moment in the film, but the overall treatment of Coach  Gaines in the movie is that he is rather manipulative and largely uncaring about his players. It shows his habitual choice to shade the truth and leaves doubt and questions about the overall integrity of his procedures.

My personal experience with coaches, both as a player and as a 30 plus year coach hasn't encountered this very often. Most of the men I played for, coached with, and coached against had incredible motives and character. Human? YES! Perfect? NOT EVEN CLOSE! But they were trustworthy and had great empathy for their players.

Now, I do have to readily admit that a teen can mis-read, pre-judge, and carry an opinion to the opposite. I often find that these players can create an 'echo chamber' where they can take a mistake or a flaw and magnify it. This will sometimes carry over to parents and other players.

I have experienced that personally. I have had some difficult parent meetings over the years where the player's opinion and report about me questioned my care and concern for the young man I was coaching. And to be honest, nothing hurts more than a player who believes that I am a bad person or that I have treated them poorly.

The majority of the time, a player will not tell me this to my face- but he will be quick to tell other players or even his parents.

I have to be extremely honest here, I have made mistakes with players in my past, especially my early years as a coach. There are times I have lost my temper, judged too quickly, accused too harshly, and used sarcasm or shaming techniques to send a message to others. I even would use some techniques with the excuse 'that was how I was coached' thinking it is justification for some motivational tools that have long lost their effectiveness.

I have had to pick up the phone in my past to call a player and apologize for something I said to him at practice. Thankfully, these moments were not a trend, and as I grew as a coach, the more rare they became. Keep trying.. never give up and sadly, you can't win them all. For those hard cases, seek to have others on your staff to reach those that you aren't gelling with. Learn to practice forgiveness and seek authentic conversations.

Today, it seems to be even more of a challenge. Players today have great empathy towards classmates who they think may be getting singled out or mistreated. I advise coaches to jump on the team in general, but be careful about calling out individuals in front of the group. You can end up winning a battle, but could lose the team in the process. Spend time looking at all of the players on your roster and find ways to make all of them successful. The talent level is never the same- but they all have worth as humans created in God's image.

Coaches who do succeed in sharp words are usually very relational and communicative. If the players KNOW you care for them, they tend to give more allowance for tongue lashings. But the average player today will tune out a coach who only has one volume all the time. The coach who gets away with it is usually seen as fair, caring, and will pass out praise as well. But these are rare exceptions in today's world.

Also- COACH THEM- don't scream at them to block...teach them the techniques about how to block!

Consider this...parents like my dad don't hardly exist anymore. My dad was TOUGH on me. And if a coach roasted me in practice or a game, he backed that coach up at home. I learned quickly that my dad was not a complain safe zone.

One of my favorite stories was one that Coach Yancey told about his dad. When he was a young player in Memphis, Coach Yancey came home and was bellyaching about how his coaches were treating him. Coach Yancey's dad looked at him and said, "Well why don't you be a suck egg hound and quit."

I laughed when he told me that story, even though I didn't know what a 'suck egg hound' was... but it sure sounded bad!

Today can be a very different story...there are GREAT parents out there and I never count it as a negative that parents love their children. Try to win them all! I still believe that a successful development of an athlete needs to be as much of a partnership with the parent as possible. A coach can never guarantee playing time, but they should guarantee that a player will be treated fairly and compassionately.... even though the love is sometimes 'tough love'. You can be team first and still care for individuals. Here is a winning edge...win the kid and you will likely win the parent as well.

The main purpose of this post is to make us a coaches WARY of our motivational tools. A young person is impressionable and we need to understand that 'a disciple when he is fully trained will tend to be just like his mentor'. I tend to coach the way I was coached- and I need to be cognizant that my players will likely end up coaching like I do... even if it is just their own children.

And in motivating my players... I need to motivate in truth, not pretense. I also don't need to overcook the emotional rollercoaster ride. If I'm not careful, I can take a pre-game talk and create inappropriate mechanisms like anger, hate, revenge, or life/death scenarios that create unintended consequences.

Don't get me wrong... I love a good pep talk. And a skilled and beloved coach can create a mindset and motivation with a flair for the dramatic. These are great stories to tell as the years go by. But the emotion of the moment at some point will melt away to real game ebbs and flows. And if we tap the emotions too much, our players can become numb at a time you least wanted it.

Here are some examples:

If you aren't careful, you may create a monster that you regret later.

Our football team will often lose the ‘warm-up’. I can’t tell you how many times we have been preparing to play teams and they are ‘fired up’. Some teams really put on a show with all kind of pump up antics. One year I remember a team coming out of the locker room for warm-ups and barking like a pack of wild dogs!

My experience has convinced me that all of the pre-game hype lasts about 15 seconds into the game. Once the game begins, any manufactured emotion melts into the intensity of battle. I love emotion, but I want real emotion based on what is happening on the field. Teams that live on emotion will have games of highs and games of flat lows. It is hard to get pumped up week after week with emotion. The players end up feeling unprepared if it is all based on pre-game hype and they ‘don’t feel it’. We want something more reliable.

We teach this as ‘intensity over emotion’. The feelings may come and go as the momentum changes, but we demand fiery focus and a commitment to lay it all on the line for your brother in the trenches. And this doesn't mean there isn't room for emotion... but let it be emotion that lifts up and not tears down. We have to continue to preach sportsmanship and class in a culture that seems to be losing it in many areas.

Over my course of time, I have admired and even been jealous of those larger than life, charisma saturated, 'kid magnets' who can hold a team in the palm of their hand. But I also plead with those types of coaches to never abuse that power.... always point upward and lift up those around you.

Even though human nature hasn't changed, the cultural pressures do call for wise adjustments to motivate and encourage. And the bottom line... it is the relationship that matters. Not buddy buddy, but a compassionate mentor who is in it for life.

One of my dear friends, Lee Hall, is one of the best I have ever seen to love his players for life. Not every coach has that ability.. but we can all seek to build bridges of communication built on love and care for the long term success of our athletes.

And though it is tough at times, pressing your players to honor their parents and others in authority is important as well.

For the coach who desires to have a ministry.... consider this passage.

TITUS 2:11 For the grace of God has appeared, bringing salvation for all people, 12 training us to renounce ungodliness and worldly passions, and to live self-controlled, upright, and godly lives in the present age, 13 waiting for our blessed hope, the appearing of the glory of our great God and Savior Jesus Christ, 14 who gave himself for us to redeem us from all lawlessness and to purify for himself a people for his own possession who are zealous for good works.

This passage in Titus contains many of these the exact sentiments- notice the focused intensity. Paul writes for us to be’ trained to say NO’ to worldly passions and have a steady, disciplined, steadfast hope which is ‘zealous’ to serve the Lord in our lives through good deeds of godliness.

I know some Christians who live their spiritual lives on feelings. “I don’t feel close to God” or “I don’t feel like my prayers are getting through”. Please keep in mind that your salvation is not based on feelings but faith in the fact of God’s promise.

Feelings will come with the natural flow of life, but they are very fickle and totally unreliable. God’s grace is the trainer. It melts our stubborn worldly desires and washes away our shortcomings. God’s grace props us up to walk one more day in hope. God’s grace marks us as His and eventually makes us desire to produce works for His glory.

For spiritual living, my challenge to all of us is to get up each morning and get steadied by the truth of God’s existence and encouraged by His gospel message of salvation. Let it be these solid facts that carry us through the day and not have to rely on warm-up pep talks or motivational music. Those things will come in time, but we don’t need them. We have our hope in Christ and that is enough. In fact, it is much more intense than we could ever imagine.

I would love to hear your stories and ideas to help us in this great profession....