My Tribute to Aaron Martens 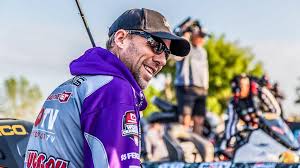 I had the honor to attend a Life Celebration Service for Aaron Martens on Sunday, Feb. 27, 2022 in Cullman, AL. It was held in conjunction with a MLF event at Smith Lake and included a "Who's Who" of professional fisherman. It was a beautiful tribute to Aaron and it had to have been an encouragement to his family.

The success of any event like that comes down to the ability in the many stories, tears, prayers, and testimonies to give everyone in attendance a great chance to remember the person and honor a life well lived. And this event did just that, highlighting the young phenom who came from California and changed professional fishing forever with his quirky ways, relentless energy, and his childlike wonder for his Savior and creation.

When we first started the fishing program at Briarwood in 2011, I personally was not aware of the professional sport and it wasn't too long after that someone mentioned to me that Briarwood had one of the fishing greats as a parent and his children were in Briarwood elementary school.

Here is how Aaron describes his beginning with BCS and our bass team. This is part of the Foreward he wrote for our book:

I first learned of Briarwood Christian School from a friend when my son was an infant. Up until that point, my wife and I had decided to home school our children because we wanted their educations to be centered around Biblical principles. The more we heard about what a great school BCS is, the more we wanted our children there. We put them on a 3-year waiting list, and got them in with my daughter going into 3rd grade and my son going into Pre-k4 and we haven’t looked back since.

I first heard from Jay Mathews, who was the Dean of Students at BCS at the time, when my daughter was in 6th grade. He reached out to me to assist him, when I could, in mentoring the budding BCS High School Bass Fishing team. I remember at the time being surprised they had one and excited for my own children’s prospects. It has been my great pleasure to pass on some of my knowledge to the kids, to become better acquainted with Jay Mathews - a man deeply committed to bass fishing and the kids he coaches, and to watch my own daughter compete on the team.

Aaron's beginning with our team wasn't easy.... his first few meeting with our anglers and dads was like having Einstein teach a kindergarten class.  Our very first meeting was in the conference room at Bass Pro Shops.

When it was over, one of my parents who had fished a long time and competed in tournaments came up to me and said, 'That was AWESOME! I only understood about 15% of what he said, but man, he was incredible!"

So we learned and he adjusted. I think over the years, Aaron spoke to our team about 5 or 6 times. And his best year with us was 2019, where he was a boat captain at a number of tournaments and totally led our group in such a humble way.

I have so many personal stories, I just don't know which ones to write about.

Aaron came down to Lake Caroline one year to film an episode of Brent Chapman's Pro's vs Joe's. Brent and his son Mason did a show competing against Aaron and his daughter, Jordan.

It was typical Aaron. He arrived late, spent over an hour rigging up his stuff, starting and stopping a dozen times while Brent kept ripping him to hurry up. Aaron was never swayed.

Aaron caught the first fish on his first cast, he actually waited to cast until he got to the stick up close to the bank that he was watching the entire time he was fumbling around with his equipment.

The show ended in an amazing tie and you get a real sense of who Aaron is as you watch the show.

You can see the episode here: https://www.peppercustombaits.com/chapman-takes-on-martens-in-pro-vs-joe-episode/

Taking Kids Out to Fish

Aaron took our anglers out to fish quite often.

One time, one of the anglers came back and gave me a cast by cast breakdown of the day. He talked about how nervous he was to even touch one the the Shimano Stellas in the rod box because he said each one costs at least $1500! But he reported that he was so blown away at how the set-up Aaron had on each rod made it the best casting and fishing experience of his life.

Our anglers also talked about how fast Aaron could fish. One of my guys said that Aaron would fly down the bank and hit 25 more targets than he could in the same 5 minute time period. "No wonder he will wear you out in competition"- Aaron was so efficient that he was going to make 500 to 1,000 more quality casts than you on any given day... and that is a conservative estimate!

The fishing wasn't always 'pleasant' LOL. Our girls team of Sadie Stanford and Jordan Martens often talked of Aaron having to lay down in the boat and scream out his frustration because they were so bad and unfocused when he was their boat captain.

Aaron called me one evening after an early experience as a boat captain (boat captains can't fish or rig equipment during tournaments).

In a small quiet voice he said, "Coach Jay, I'm not so sure I can do this. That was the longest I have ever been in a boat and not been able to fish. And the girls...well... I mean, they did fine.... but I just don't know" And we both laughed.

By the way... the girls got better... they were the first all girls boat to win an ASABFA regional at Eufaula and helped us win the State Championship that year!

Another time one of my seniors found me early one morning. "Hey coach, Aaron called me last night." I said "Awesome...what about?"  The kid replied, "He saw the picture I posted where I held all the fish together and he told me to never hold fish like that again, it isn't good for them. And also to never keep fish in my livewell unless I have to." I asked, "Was he mad?" My senior looked at me and said... "No, he was just speaking up on behalf of the fish."

I went to see Aaron launch one morning at Lake Martin at a B.A.S.S. elite event. Almost everyone was already in the water and Aaron was his usual 'almost late' arrival.

I waved at him and asked if he wanted any help launching. "Nah, Coach Jay", and he backed up and just shot the boat off into the water. This was BEFORE the Ultrex was a thing. And the boat just floated out. He walked by me a few minutes later and squinted out into the dark and a sea of red, green, and white lights. "Oh good, I floated next to Van Dam, he will help me. And off he went."

Aaron would light up when we talked about eating habits and exercise. He often talked about what he was picking up from the Japanese and their approach to fishing. He spoke of knots, lines, wiggle rate in cold water, jerk bait tweaks around cover. I just listened with very little knowledge but total respect to his mastery.

One of my favorite moments of these deep fishing discussions was when our head football coach, Matthew Forester met him at a soccer match. Matthew knew who he was but couldn't tell you the difference of a drop shot and a spinner bait. Coach Forester walked up and said, "Aaron, how's the fishing these days?" Matthew said 5 minutes later, they smiled, shook hands, and then they walked off.

"What did he say?" I asked Matthew as a follow up. Matthew said, "Well..... it stared about something with temperature and the north end, the spawning pattern being ahead on the south end, and the wind and current making a difference in how the bait fish were relating to the structure from Tuesday and the normal movement patterns of the bass toward their post spawn locations may be different than he thought."

"Did you know what any of that meant?"

Matthew just laughed, "No, but it was sure impressive!"

THE HUMBLE SERVANT OF CHRIST 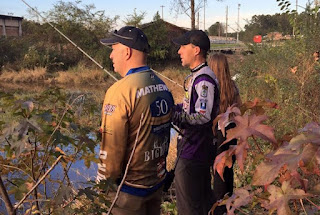 One year, I compiled about 5 or 6 years of notes and copied them into a 'little handbook' for our fishing team. I put it in a google doc and sent it out to the team and parents.

One of my senior parents called me and said, "Coach, you ought to put this out in a book."

Now, me putting a book out on fishing is like a guy writing on brain surgery just because he stayed in a Holiday Inn Express last night!

So I sent it to Aaron and asked him to read it and offer suggestions. He took it, read it, added some tips, and wrote the Foreward that I quoted from earlier. This was the three time Toyota Angler of the Year humbly choosing to encourage and improve the project and our program!

I have had so many compliments from parents of young anglers and even a few pros about this simple introduction to fishing.... and all I can do is thank Aaron for his help... and he never wanted any credit for doing it.

It is still on amazon.com:

We went to a late night dinner one evening after a pre-tournament meeting. Aaron and I ended up sitting together for about 30 minutes. And that night, we never once talked about fishing. It was all about his faith and especially how strong his mother was in her walk with Jesus.

At the memorial service... every tear and story was not about Aaron being 'lost'. No, Alton Jones said it best that Sunday... "Aaron is not lost. We know right where he is..." And everyone knows... He is with Jesus. Skeet Reese, Brent Chapman, Kevin Van Dam, and so many other friends and family members spoke so eloquently... and the MLF video was special as well.

“I am the resurrection and the life. Whoever believes in me, though he die, yet shall he live, [26] and everyone who lives and believes in me shall never die. Do you believe this?” (John 11:25–26 ESV)

Please pray for Lesley, Jordan, and Spencer.... What an honor it was for me to briefly know this one very special man!