Guest Blogger: Observations and Reflections From a Millennial, Single-Wing Coach 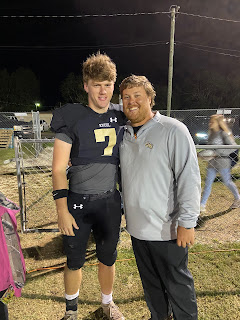 Clint Humphrey is currently the Offensive Coordinator at Excel High School in Excel, Alabama. He previously has served as OC at St. Luke's Episcopal (his alma mater) and Demopolis High School. He has had position coaching stints at Murphy High School and Stanhope Elmore High School. He is married to Morgan Williamson Humphrey and they are expecting their first child in May!

I asked Clint to submit a post on what he has been learning and this piece is awesome!

The More Things Change, The More They Stay The Same.

Observations and Reflections From a Millennial, Single-Wing Coach.

Jay extended an invitation for me to write a post. I'm thankful for that and for our friendship! He has been an awesome mentor in many aspects of the game for me and I hope that what I say in this post is helpful to someone. I certainly don’t know it all but with each passing season I seem to grow, certainly as a coach, but more as a person. To me that's the beauty of it. I have changed more philosophically and schematically than I could have ever imagined. Walt Whitman once said, “Be curious, not judgmental.” I wish I could say I have spent my entire career living by this mantra but I have not. However, I have figured out that this type of mindset will lead to much more happiness in this profession and certainly many others.

I have been so blessed to have worked under some really great coaches and to make some unlikely friendships along the way. One of the most influential men that I have worked under was Rick Cauley. Now the Head Coach at Davidson High School, Rick was a long time coordinator at Murphy and then Head Coach at the tail end of his tenure there. For a few years he had run the old single-wing offense. We were not a single-wing team during my time with them but it was clear to me how much that system had changed how Rick thought about the game. He always seemed to have an affinity for it. For whatever reason, that offense has stuck with me through all these years. I have always admired its style of play: Disciplined, Tough, Physical, and most of all, Contrarian.

I am now coaching at Excel High School and this is the first place that I have coached that wasn’t winning when I arrived. It became clear to me that in order for us to compete offensively we needed to be different. We needed all the things that I admired that offense for being. I believed it could work, but my fears were obvious… what would happen if the kids didn’t buy in? What would we do if a team stymied the run and we were forced to throw? We decided to commit to it and I believe it has changed how I will think about the game forever. 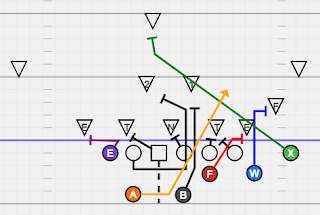 Of course it’s extreme but I think that the principles of a single-wing offense can be applied to many others. It’s likely that you use many of them and don’t even know it. What I didn’t expect is for it to have impacts in our program that far exceeded just Xs and Os. After all, it’s just an offense? These are just a few observations and reflections about the offense and about the impact that I believe it has had in building the kinds of young men that we want in our program, school, and community.

Napoleon used it to conquer much of Europe. We use it to get first downs. “Concentration of Force” in simple terms means “massing power at a single point instead of spreading it thinly over many points”. That definition, in many ways, is completely different from the modern approach to playing offense. We try to build formations that threaten more gaps than a traditional offense. Then the plan is simple, “get there fastest with the mostest”. We try to get double teams, angles, and as many hats as we possibly can in a gap. All our effort to achieve 4 yards. Anything after that is a bonus. All those things sound like normal stuff mentioned by coaches at clinics but I don’t believe they achieve it in the same sense as us or other classic single-wing teams. That’s not to say they aren’t successful in their respective offense.

I’m a history major and I have always been fascinated by the strategy of the Phalanx formation. The same principles that allowed the Macadonian Phalanx to conquer the world helps us win football games. It is a force multiplier that we believe gives our kids an edge.

The famous stand at Thermopylae is a testament to this tactic's credibility. Outnumbered, by some estimates, 1,000 to 1. Leonidas, 300 Spartans, and about 6,000 other Greeks funneled them into a narrow corridor called The Hot Gates where they employed their Phalanx formations to attempt to hold off an onslaught of 300,000 Persians. Eventually they fell but the results were clear. Fighting as a “single impenetrable unit” as Leonidas said multiplied the force of the Greeks to be able to fend them off for as long as they did.

In today’s game we live in a world of RPO, option, and play action. Usually this requires ball handling and fakes to draw the eyes of the safeties or linebackers. We feel that to capitalize on the concentration of force that was previously mentioned we need to get to the gap as fast as possible. Plays like Power and Iso are, traditionally, somewhat slower developing plays relative to something like a Trap play. But because we step to the ball on the direct snap we feel that the plays hit with the same tenacity and with all the advantages of Power and Iso but with the speed of a Trap play. It also allows us to take advantage of multiple kids' skill sets while on the field and in the backfield together. Multiple passers, runners, and (on 4th down) kickers. It changes how we are able to play the game and stress a defense.

Our Head Coach Jason Phillips does an awesome job of laying the foundation for our program and one of his favorite verses that I have picked up is Psalm 144:1. It says, “Praise be to the LORD my Rock, who trains my hands for war, my fingers for battle”. In today's politically correct world many people may have concerns about this but this year has proven to me that it's true. Young men do not crave iphones. They crave discipline, honor, community, and structure. Most of them just don’t know it. Our boys didn’t. I believe they see now what it means to represent and “defend” a community. We had a tendency to play very well at home and I believe it was because of the pride they took in playing on their home turf.

David was used to the strings of a harp or the shaft of a shepherd's hook but that was not how God made him. I believe what David was made for is what Teddy Roosevelt described as the “strenuous life”. In a now famous speech he once said this,

“ I wish to preach, not the doctrine of ignoble ease, but the doctrine of the strenuous life, the life of toil and effort, of labor and strife; to preach that highest form of success which comes, not to the man who desires mere easy peace, but to the man who does not shrink from danger, from hardship, or from bitter toil, and who out of these wins the splendid ultimate triumph.”

This is the life I believe we were meant to live. I believe as coaches we should strive for our players to understand that feeling and I believe our style of offense helped to shape this understanding in our players.

There is an old Latin phrase that says, mori in se, which means “die to self” another seemingly extreme statement in our day and age but of course it is not meant literally. It's imperative that young men learn the value of selflessness. I would rather them learn that in our program and spend their life using the ideal than to stumble through life only to figure this out later on.

A verse that comes to mind is John 15:13. It says, “no greater love has a man than to lay down his life for a friend”. Again, of course we don’t mean this literally but we very much mean it in the sense of dying to self for the betterment of the team. The success our offense experienced this year (top in our region at 32 points a game) is truly a testament to how selfless our players played. No 1,000 yard rushers. Our “QB” threw for less than 400 yards on less than 50 attempts but spent most of his time blocking for others. You could see the joy in our players when anyone scored. This is something I am very proud of.

These are opinions and just personal observations from our season and style of offense that I hope are helpful to someone!