Something Bigger Than the Moment to Handle The Moment 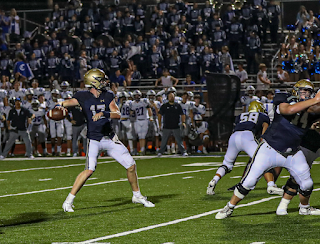 It was an outstanding season for the 2021 Briarwood football team. The team finished 10-2 with the 2 losses coming from the two north semi-finalists and the 6A State Champion.
Very few people remember that BCS went 9-14 the last time the Lions played 6A competition.
Coach Matthew Forester and this group of Lions have fared better in this latest move up and is currently 18-5 in class 6A the last two seasons. The reasons for the difference are complex and not fully attributed to coaching.
These factors need to be considered to evaluate the success despite the fact that BCS is the smallest school in Class 6A (considering the 1.35 multiplier). And the road continues to be tough in finding teams to play for the next two years in 6A. The 2022 schedule is still unfinished and we are finding it hard to get teams to play.
Over the last few weeks, the following thoughts have been too dominant in my mind to not flesh out in words.
This post is also a reference to an often untouched on category in coaching.... the mental health of players and coaches. It isn't easy navigating expectations and the work required to compete.

Everyone in our small 'Briarworld" will understand the references and moments, but I always hope these posts apply to a grander scope and scheme of life and opportunity.

On Friday, Sept. 3 our varsity football team pulled out that type of win that becomes memorable and special.

Our rival, the Chelsea Hornets came out and played an amazing football game against us. They sustained an energy and fire that seized early momentum and knocked us back on our heels as a team. Their coaches devised an excellent game plan and their players executed that plan to such a high level that we found ourselves down 14 points through much of the game. I have coached in enough of these types of games over the years to know that the regular outcome is a loss. And had we had any turnovers or missed opportunities in the 4th quarter of that game, we would have sustained a very hurtful loss.

Football is also strange that in the chaos and storm of physical competition, any number of things could have gone differently and the outcome would be impacted. These are the types of games where, if both teams played ten times, you would have 10 drastically different scores. Add heat, humidity, injuries, illness, penalties called or uncalled, tackles made, passes dropped... and you begin to see why sports have the drama and draw that keeps us showing up and being entertained.

But there are TWO factors I want to point to as an illustration from this contest that is important to giving yourself the best opportunity to win in those moments. There are SO MANY MORE than these two... we won't take time to discuss prior work and preparation, team culture, personal discipline, leadership, playing intense regardless of the score..... all of these things are well documented.

These two factors are 'dispositions' .... or to drill down a bit, possible even  presuppositional attitudes that can enhance winning at those moments where doubt, drama, and the opponent are at full hurricane force. And I'm not saying that one team had them and the other one did not. Having a disposition doesn't guarantee success... but it adds to the likelihood of it happening.

FACTOR 1- Something Bigger Than the Moment to Handle The Moment.

This is one I point to quite often as I work with quarterbacks. A QB is in a high profile, spotlight position that carries quite a bit of stress and expectations.

I tell my Qb's all the time, "there has to be something bigger than football in your life to be able to keep football in the proper place". For us, that bigger thing is faith... We point to a relationship to God through the good news message of Christ. When Christ is preeminent in life and everything is made subject to Him, then everything is kept in their  proper place. If Christ isn't at the top, then even good things can be mis-placed to god things and they all fail as idols. Football is a great game but it is a terrible god.

If we keep that perspective, we learn to handle both the victories and defeats as they should be. They still feel good and they still hurt ( I HATE to lose).. but we learn to accept the events under the sovereign hand of God... a good of great intentions (Romans 8:28 and many others).

The illustration I use to support this is from other sports.... I usually ask them, "Do you want to know why Tiger Woods and Phil Mickelson  make putts to win majors, why Michael Jordan hits buzzer beaters, why Tom Brady drives the team in two minute comebacks and others choke?" And we all think things like talent, hard work, competitive fire (all true). But I think a huge factor is "they don't HAVE to" they are free to play a game, free to make the play, they are not validated by the moment... they already are secure in their position... they have done it before... they already believe in themselves.. and others believe in them. It is HARD to get there... you do have to do it the first time... but once you break through, it is easier to do it again.

One poor guy needs to make that putt to keep his tour card and Tiger just wants to add to his dump truck of previous wins and prize money- that isn't a fair competition!

This is a delicate balance... you can care so little that in the end you don't really want it...no- no- no...IT HAS TO MATTER! At the same time, if I can convince a competitor that he is already validated as a man.. he is already a winner.. he is accepted win or lose... then he is in a much better disposition to make those plays under pressure.

I also have to admit that competitors who tout 'faith' are open to ridicule and skepticism that can be justified. There are some who extol a faith, but it is only a slogan. I have always said a fake Jesus, a 'tag-on' Jesus always falls off during times of stress of failure. It needs to the authentic or it is a fraud.

Isn't it interesting how the media covered the BCS/Chelsea game was covered that night? (It is important to say that this post has nothing to do with the opponents that night- they played so well and likely have these same qualities... again, to have this disposition  doesn't guarantee a win...)

Alec Etheredge, Shelby County Reporter: "Trailing by 14 entering the final quarter, the Lions didn’t panic. Instead, they went to work."

Another penalty pushed it back to be fourth-and-goal from the 10-yard line, but the Lions looked as calm as possible in the biggest moment of the season thus far."

And though there are a lot of factors that lead to us making plays under pressure... the fact that it really isn't life and death contributes to a better disposition to make the play.
This is hard to teach by the way and thankfully has been a part of our program for many decades though we fail at this many times.
Here is another way to put it- IF YOU ARE FREE TO FAIL (i.e. your life will still be OK if this doesn't work out) YOU ARE FREE TO SUCCEED. IF YOU ARE FREE TO MISS, YOU ARE FREE TO MAKE!
So, maybe I'm really describing a type of FREEDOM, not chained to the idol of validation.
And that is a part of the second factor....
FACTOR 2- A SUPPORTED PERSON IS A FREE PERSON
This is a little more difficult to explain... possibly controversial... but true.

In that game a few weeks ago, our coaches and players were free to just coach and play because for right now our football coaches are supported... i.e. not on the hot seat. There isn't a large group of parents or players standing in judgment of every decision and move. And because of that, people are generally trusting that when decisions are made, they are given the benefit of the doubt, and the calls aren't life and death moments as well.

When you feel like you are coaching for your job... I often wonder if you are really free to coach?

I experienced that personally as a previous head coach. At some point, I knew that there were significant people who had decided I wasn't a good head football coach and my tenure was in jeopardy.

And it impacted decisions... because I was anxious and thought way too much about how a decision might impact my job approval rating.

I wish I could wave a magic wand and get positivity to all coaches at all schools. I know that isn't a reality.. but a high school coach should never have to wade through the mess that college coaches are subject to.

When fans, parents, and even players begin to doubt a coach... then the opportunity to win in those pressure moment sis greatly diminished. And it saddens me because it is a self defeating disposition.

Let me take the Chelsea game as an example and show how that could have worked against us...

Let's pretend we have the opposite atmosphere and our coaches are making pressure packed decisions but the fans, parents, and players think the coaches are stupid.

When we got behind early? "I expected this.. out coached already"

When we throw a halfback pass? "That was a dumb call... what are they thinking!"

When we lined up offsides on that play? "see there... our coaches are idiots!"

And then we line up for the next play... does the negativity make us think we are going to make the play or does it already lend itself to the likelihood of failure?

Does the coach feel free to make a gutsy risky call?

Do the players trust the coach or do they hear so many bad things all the time that they actually doubt them?

See how it works?

I talk to AD's all around the country and they will ALL just about say the same thing- positive parents/fans almost always lend to a better than expected season.

Negative parents/fans who whine and complain almost always are sabotaging their season before it even begins.

One AD told me on a zoom that his ______ program would never be successful until they graduate the professional critics and complainers. But the fear is that it pollutes the water for the next group coming... so it is never easy.

Again, it doesn't mean that coaches don't need evaluation and pressure from administrators to improve.

What it does mean is that coaches need to coach, parents need to parent, players need to play, and administrators need to administrate. If you get beyond your role, it leads to dysfunction.

I have many examples of that over the years...  some positive and some negative.

Don't misunderstand me here... there will ALWAYS be critics and distractors, I am not THAT naive. But championship programs have less of that and the MAJORITY of the support has to be positive to better enable success.

To the parents, I think it is the same solution- there has to be something MORE than the athletics experience to keep it all in perspective. I struggled with that as well.

3 John "I have no greater joy than to hear that my children are walking in the truth". (ESV)

Allow God to use the experience both good and tough to prepare your sons and daughters for their life. He is trustworthy and the Scriptures declare it so.

And it has to be more than words.