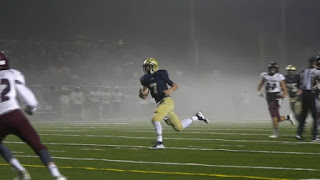 I was reading a book of war tactics and schemes and I couldn't help but notice some of the terminology fit my eye as far as how we scheme offensive football.

In some ways- we need to always apologize when using war references and battlefield tactics when speaking of football. The heroic men and women who guard our nation's freedoms and the sacrifice of limb and life are more honorable than a game.

However, the parallels of battlefield strategy, does have unique analogies to football. After all- football is a ground war employing formations and maneuvers.

So- let me use some military jargon and write a little about play calling:

Attack the center of gravity: I don't think that offensive play callers use formations, shifts, and motions very effectively. There are some defenses where you should move a lot and some where it is just a waste of energy. Some offenses do it to be cute- the best offenses move with meaning. This is where I think guys who call plays on the sideline are most hindered. But football is a numbers game- offenses block better with angles- some defenses work well when balanced and some are more exposed when balanced by personnel issues. When Coach Mathew Forester became the head football coach at Briarwood, that was the very first thing he challenged the offense to do.
Counter attack: In football terms this means you have to know what a team is going to do to shut down successful plays and HAVING ANSWERS to what you do to counter their adjustments. This is where you can really gut a defense. Hit them in a hole, and counter it as a rhythm to hit them at the adjustment. The beautiful thing is when you change as they change. I always wanted to stop hitting a honey hole before the adjustment, so I could come back to it more often.
Surprise attack: These are play actions and 'trickeration' plays. It also refers to knowing a tendency and using the defenses knowledge of that tendency against them. If you are 99% run on 3rd and 1- use that tendency against a defense at key times.
Ambush: Screens and Traps are a type of ambush. You draw the defenders in, make them think they have you and then cut their heart out with a planned attack. I don't think we do enough to sell our players on how these plays work- the better they act the better it works.
Flanking: This is my biggest gripe about offensive play callers- not using motions, shifts, or formations to out flank the opponent. And an out flanked defense is a dead defense. This is why the option game can defeat a more powerful defense. I was watching Lane Kiffin's first game against Alabama and he used tempo and unbalanced sets to get the Bama defense to misalign a number of times. One time, they just lined up in Trey X over, ran Duo, and the running back bounced it to air.... there was no one there!
Blitzkrieg: In football terms, this is starting a game or a half with all guns blazing. It is why we like to script and rehearse the first few plays. It has a rhythm and flow- We want to create panic! It is also why play callers will often call a shot after a turnover.
Firepower: Another pet peeve- if you have more power... use it. Many, many years ago BYU upset Miami in a game that should not have been close- but Miami stayed finesse the whole game and did not go to the power game. Sometimes you just have to line up and go..... nothing cute.
Seizing the initiative: After a turnover- go for the kill- it doesn't have to be a homerun throw (though I am shocked at how many fades and double moves I have called over the years that resulted in a 1 play drive for TD after a fumble)- it can simply be a fade comeback or dig- but try to hit them with a big play after the turnover.
Off-balance: I referred to this before- but all play callers are at their best by hitting a rhythm- inside, inside- out -in- short deep short, inside- outside, medium- screen, power, option, all to a beat. I also attribute this to attacking a 3-4 defense ( pass on run downs and run on pass downs).
Tactical Deception: You have to know what the defense saw all week as they prepared for you and you have to screw that knowledge up early. If they are signal stealers- you need to mess that up early as well.
Psychological Annihilation: You have to teach your players to ALWAYS show great body language and cues- in the 4th quarter, teach your guys to show energy and blood lust. Never get a losers lean!
Reconnaissance: You have to do your homework. And you need to chart early how the defense is adjusting to your stuff. If you know where they are- you can hit them hard.
Well, that was fun.... what other ones do you have?
Posted by Jayopsis at 6/24/2021 02:45:00 AM