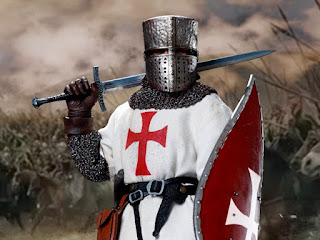 The picture that accompanies this blog is sure to raise eyebrows... and the topic for the next 2 months will no doubt raise concerns... but no anxiety is needed, nor harm intended.

All I am doing is working through a 'thought experiment' to explore if, when, what , or how a christian should act if the cultural circumstances required actions that could be construed as 'dissident' in nature.

The Knights Templar have a controversial and mysterious history, a track record of both service and sin, and they still draw interest to this day. The history of the group shows the messy, open to criticism, and often contradictory actions of Christians who find themselves facing assertive attacks of ungodly forces.

The Knights had a noble and humble beginning.... their main task was to protect pilgrims who were traveling lawless roads to the Holy Land. Their NAME comes from their home fortress of operations- the crumbling remains of Solomon's temple. They were so successful as virtuous protectors, that their fame and financial prosperity grew as well as their numbers.

The financial growth came from the installation of the first international banking system where pilgrims used 'credit' from deposits in Europe which were honored in the middle east and helped keep travelers from having large sums of money on them at any one time.

This growth kept the Templars a powerful force of protection for roughly a 200 year period. But sadly, human greed combined with the authority to wield a sword had its predictable corrupting influence. Strange stories began to emerge about their mysterious rituals and other abuses and the church finally wrote edicts of indictment in discontinuing the order in the early 14th century. There are still members of  a namesake order today, committed to charity and ministry- but the 'power' to engage in battles is gone for good and for good reason!

SO it begs the question... can there be a legitimate constitution of a religious order that can be trusted as 'a warrior monk'?

The Bible is full of warriors who are extolled for their actions. But we also have the admonition of Christ to 'turn the other cheek' in the Sermon on the Mount. Peter presses hard on the issue of 'submission' ... even 'honoring the Emperor' in his letters- yet, at the same time, both Peter and John are quoted in Acts as answering the charge to quit preaching-“Whether it is right in the sight of God to listen to you rather than to God, you must judge, for we cannot but speak of what we have seen and heard.” Acts 4:19–20.

Finally, there is a splintered theology in the church related to pacifism during times of war. Pacifism has been a predominant view in church history yet, there is also HARSH criticism toward church leaders for not facing down fascism as it grew in Germany in the 20th century. A part of Theodicy is the never ending debate of whether there is such a thing as a 'just war'.

I don't anticipate solving these issues in a blog.... but as sure as American Colonists fell on opposite sides of the reasons and timing of the Declaration of Independence, there will always be opposing views on whether it is right to stand by or rise up in the face of persecution or injustice.

Could it be by design? Is it possible that God allows authentic response to individual events that spreads His followers into many corners of ministry? I don't know... "The secret things belong to Him" Deut. 29:29.

Ever since the first government ordered lockdowns of 2020, I have been re- looking at my personal response to these things. When do we obey and when do we choose to practice civil disobedience?  I laugh because I am labeled  a "protest'ant" - we have been protesting for over 500 years!

And because these are religious questions- questions of eternity- these are matters than men are subject to war over...  the more weight that lies in the balance...the harder we tend to fight!

I have yet to see a situation that justifies a violent or destructive action unless it is a necessary self defense. We should never accept violence or destruction as a legitimate right of protest. I'm a pretty passive man, don't be surprised by my response to a threat to my wife of children!

And I think we rush too quickly to 'nuclear options' within conflict. And Lord help us, because it seems like no one chooses to forgive anymore these days... "You jump on my logo... then by golly I will jump on yours!"

Typical of my approach, I am simultaneously listening to 3 podcasts and reading two books on these topics, and browsing the net to see where the trail may lead. There is a lot of information regarding the problems of our growing intolerant/ totalitarian prone cancel culture.... but not many valuable solutions.

So far, the most hopeful posts, writings have come from non-conservatives who are alarmed by the leftists and the threat it poses to traditional liberalism.

Personally, I have to begin where I believe I have made some mistakes and given into some distorted/ faulty thinking myself.

So here are the things I am hoping to express with personal clarity and a spirit of hope:

1) No need to panic- the Book of Revelation especially has a tone of encouragement and victory. Until God brings down the curtain of history, we must be willing to faithfully work and serve. And no need to rush into this... it will happen when it needs to.

2) We can be faithful to the Lord's commands and become effective dissidents at the same- we don't have to sit back and take it over and over. There is a strategy and purpose to what the Lord expects of us... and it always is about recognizing that people are not our enemies- we want them to come to know Christ. We wrestle not against flesh and blood. This will take a good bit of writing to explain.

3) We have to be willing to call out our own sin and speak out against the elements of our own political persuasions particularly when they trend toward the 'lunatic fringe' of an ideology.

4) We have to make every effort to win and warn our young people. We can’t shy away from telling our children the truth for fear they will be punished. We have to sit them down, be honest, and teach them how to be wise with their treasure trove of gospel truth. There will be a day they may have to stand- but let us take the early blows so they can do it even better than we as they watch us make our best efforts to resist.

5) We can't lose our gentleness and respect... even if the 'other side' chooses not to. This may be the tallest task of all!

6) We can't wait to decide our future actions later- we need to begin thinking through- small group cells, wise and prudent communication strategies, financial plans if the state/elites decide to shut down economic participation in the system, a willingness to help one another as possible persecution begins.

7) We can't withdraw from the political process, we need to seek better and bolder candidates in both parties who will defend religious liberty and who still hold an adherence to the constitution.

8) We can't be afraid of the cancel culture... in the end, these avatars are anonymous bullies and we need to expect criticism and mockery at many times and in many ways.

9) We have to keep our eyes on China. Unfortunately, we have elites in our republic who idolize their wealth, power, and order. And some of those are just in love with their gifts... that come at a cost they can't see yet.

10) I have no reason to do anything right now but pray for the President, wish him well, and pray for our leaders to lead us to peace and unity... all of them!

To close this post, I fully expect the next 5-10 years is going to showcase the most intense attacks to Christian institutions in the history of our republic. And we will need to be prepared to respond in a wise and responsible way.

Individual Christians will likely face the increase of a myriad of difficult trials that could include loss of liberty, loss of jobs, the loss of tax exempt benefits, shaming and shunning, and a propaganda campaign to demoralize and deceive others.

We know the battleground areas- no need to list them.

This isn't a 100% take it to the bank prediction, but to not plan for that now would be a dis-service. We need to be 'Josephs' stocking grain BEFORE the famine and before the rise of Pharos who know us not.

So be patient with me- I need to write these in small bits--- and I am still sorting through it myself. But I am not afraid, nor am I retreating. The worst persecution right now is getting blasted on social media and possibly 'banned from twitter'- big deal. But learning how to respond positively and faithfully to those salvos, will help us in the long run respond well when it gets serious.

I close this writing with a very hopeful facebook post, that my wife sent me. I'm sorry I don't know who wrote it. 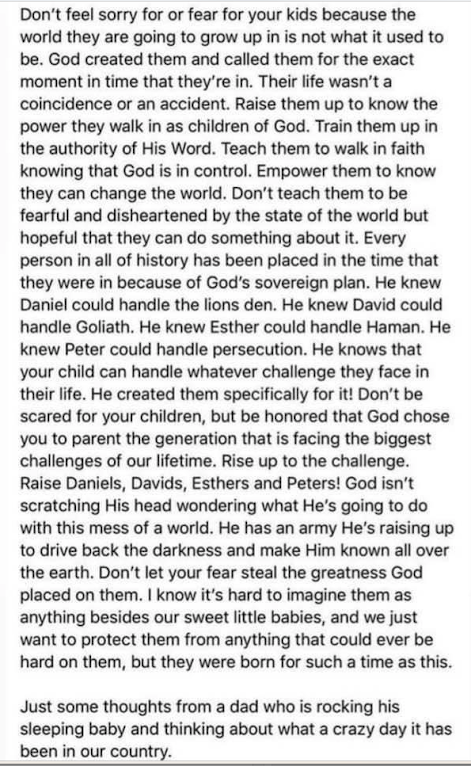