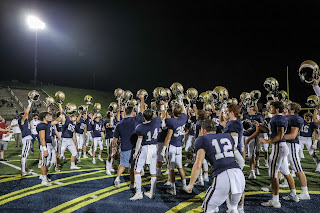 I don't know if I have the right words to express how proud I am of the 2020 Briarwood Lions football team! There were plenty of tears last Friday night... not because we lost, but because it was over. The emotions are in direct proportion to the amount of work and love that dominated this team.

I want to start with the leadership of head coach, Matthew Forester. In two seasons, Coach Forester has implemented one of the best systems I have ever had the privilege to know and work with. The integration of offensive and defensive terminology has elevated our football IQ and made everything from Hudl analysis to game communication easier and improved. It would be impossible to explain ALL of the improvements- but our practice schedule, strength and conditioning schedule, game planning, equipment inventory, young player development, college coach communication, player meetings, drill and skill development have all been greatly enhanced in his two years as the head coach. To top it off, our coaches and players love him and are willing to follow his lead.

This joy of this season is directly attributed to our seniors. This group is one of the great competitive classes in school history. They have done it in multiple sports as well. I was never concerned in any game this season about our ability to 'put the ball down and play' regardless of the opponent or circumstances. They practiced hard and cared for one another... especially the young guys. They had fun, but also were extremely physical on the field. They battled each other so hard in practice, that the games seemed easy.

I could not think of a better team to handle the challenges of a Covid season and moving up to 6A. They expressed a gratitude to play and they played each week like it would be their last.

The BCS community is also a joy to be a part of. It takes extreme effort and sacrifice for a football team to get through an entire season. The ARMY of volunteers and parents who worked with enthusiasm and projected a positive spirit worked wonders! I could write pages about all of the help we had.

It was our best performance ever in 6A competition... and a season I will never forget!

I do have a very brief comment about each game- things I never want to forget.

The opening night jitters- the fact that we were playing with Covid protocols was a blessing- the band in the end zone dodging the pre-game kicks- the sound of the Ft Payne kicker when he hit the ball! My favorite image is Luke Reebals signaling TD on the opening kick-off when their kicker kicked it through the goal post. That right there showed me that this team was going to be fun!

Loved the opening half- we took it to them. Tyler Waugh had the first of many explosive plays that night. Really important game to teach us how different it was going to be playing up and how disciplined we were going to have to be.

Always good to beat your rival. Some big pass plays that night showed what a great job our receivers were doing in improving. We were also developing a physical prowess that would become a trademark all season. Brooks Donnely showed that he was back from his ACL injury the year before.

The opening image before the game with players from both teams holding flags was very emotional for me. For some reason, the jet sweep by Sawyer Tindall for a long TD was a highlight for me.

Was such a big time win- Huffman was loaded and was confident they could beat us! The hitting in that game was mortal combat! Coach Kerley calling Big O to the boundary and Luke Reebal's run on that play in the 4th quarter was a huge play. Also grinding out the clock in our heavy set was really nice.

Our never say die fight was impressive. We made big strides in our passing game that night. A big part of that was watching our guys rally around and encourage our soph QB as he worked through some mistakes early. We never fell apart as a team!

Great team effort that night! To get down early and then storm from behind was impressive. We never panicked and poured it on late. Luke Reebals has a great night behind a big effort by our offensive line. I especially noted that Eli Steadman showed great leadership that night and played really well!

My toughest week- being out with Covid. Our defense played outstanding... but we know we did not play our best. The score was not indicative of the game.

Big time defense and big plays from Nic Dicen. Winning on their field is always special.

Dominating performance by every group. Of course I will never forget getting the lights on as Corner rolled into the parking lot.

Being down 14-3 at the half. These seniors were not going to be denied! Tyler Waugh put on one of the great single performances I have ever seen! Big Ride's pre-game speech was amazing! All the speeches were terrific.

Tough way to go out. Watching Parker Hutson's pick 6 in the 3rd was symbolic of his never say die effort all season. Our guys battled valiantly.

Again- I am leaving so much out. Our JV and freshman team was a joy to coach!

I want to say thanks to my QB group... what a great group to coach every week. CV was impressive each week and he improved every week.

As a competitor, I am worn flat out... but soon will be ready to pick up and figure out how to get better soon!