The Last Monument ( A Parable) 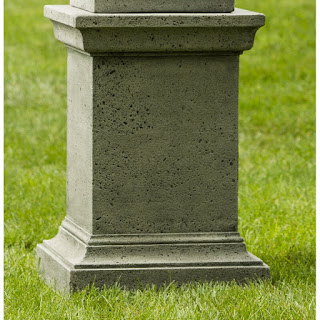 It was a rather odd piece to remain.

I had looked at it numerous times, but had never taken time to study it or consider it. It was simply on the horizon of my lunch breaks when the weather was good and work was slow.

But one day, the sandwich and crisps were stale and life was that subtle type of blues you drift in and out of from time to time.

There was a green mildew on the base and pigeons had done their best to add their own graffiti and color.

My guess is there was a time that it rose from the earth in a clean glory and the artist was proud to have his or her work available to the critic and admirer alike. Were they pleased with the response? Was there a ceremony? Did it appear similar to their original vision or was it in the end a disappointment?

I looked around.... there were plenty of people in the park that day, but I was sure that I was the sole person taking note of it. It was always there, it just did so little to garner attention. It had no plaque, no lighting, likely was just a shield to the light, an obstruction of a view, a shadow from the heat, or a back rest for a runner who had just finished the concrete trail that encircled the lake adjacent to the park.

I never know why the mind connects curious thoughts and memories, but I suddenly remembered my spiritual reading from that morning. I was half asleep and barely thinking when I read it in the twilight of the dawn, but the words came alive and jarred me out my stupor.

It was from a fragment called "Joshua".

I looked harder at it and said it one more time in my stream of consciousness...

"What do these stones mean?"

It made me want to know more about this relic of the past.

I tried asking a few people in that park and at work over the next few weeks, but I never got a clear answer.

When I brought up the question to strangers, they looked at me like I was a madman and my friends made fun of me.

The most common answer I got was, "No one knows" or some said with confidence, "there is no meaning".

I did get some dime store philosophers who explained it was "Whatever I wanted it to be", but I felt like they weren't talking to me as much as they were enjoying listening to themselves.

Whenever I googled it, there was no mention of it. It was even more curious that all pictures of the park never showed the monument. The Apple map satellite view did not have it either.

I would forget about it for times. I dared not ask about the Joshua passage because I never knew who I could trust to let on that I was reading the prohibited papers.

On the first Sunday of each month, they let the seasoned citizens out to be in the park if the temperatures were right. I put on my helmet, shield, and gloves and went there one morning. After all, Joshua said to 'ask the fathers".

But it was useless. None of the handlers allowed me to get close enough to speak with them. It would have been in vain to do so anyway; every head shield displayed a red light which meant the hearing enhancements were turned off.

I made an appointment at the adjacent media center, but there was no image or record or account of what the structure was supposed to be.

I sent an electronic communication to the Parks Enforcement Agency but there was no receipt that it had been opened or read.

I do think that communication did result in some action as a crew came out one Wednesday lunch and cleaned the monument and pressure washed the pigeon droppings.

It was on their break that I finally was able to glean some info.

"What are you guys doing?"

The younger guys kept hitting the vapes, but the older one finally replied.

"Just cleaning, the feces may be contaminated."

I just nodded and played it casual.

I tried my next move.

"I've been coming here for years now, and it's crazy, but I just started wondering..... what is this?"

He stooped down to buckle his suit. "It's the last monument."

"And is there some reason, it is the last one?"

He laughed and judged me a fool. He pointed to the top.

I squinted in the sun, and looked at it.

"It's flat. This was just a pedestal."

He was just about through with me.

"Yes, there was something on it." His sarcasm was not hard to miss.

He motioned to the others.... the break was over.

A few weeks passed and my madness subsided.

Maybe I will be old enough one day and come to the park once a month.

Maybe then, someone will tell me what these stones mean.