The 'Point' of the Thorn 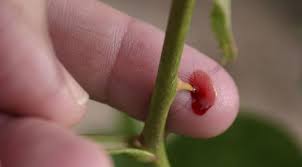 A good friend of mine, who is a master Sunday School teacher,  told me in exasperation one morning that he disliked teaching on suffering. Not only is it a difficult topic, it often brings out extreme responses. And MANY of these responses are unhealthy or irresponsible. I totally understood that he was speaking in hyperbole and would keep teaching from the Scriptures. But I too understand that teaching or writing on topics can take a toll.

It can also break your heart to see the amount of suffering that some people have to endure.

I feel the same way in ever trying to blog about the topic. To explore it exhaustively would require a large and precisely crafted book, and even then it would be hard to do it justice.

Paul's 'thorn in the flesh' is on the spectrum of suffering, but is far down the list, I believe, of his famous litany of perils and trials he endured as an apostle of Christ. Even without knowing specifically what the thorn was.... where would you put it on this list?

....far more imprisonments, with countless beatings, and often near death. [24] Five times I received at the hands of the Jews the forty lashes less one. [25] Three times I was beaten with rods. Once I was stoned. Three times I was shipwrecked; a night and a day I was adrift at sea; [26] on frequent journeys, in danger from rivers, danger from robbers, danger from my own people, danger from Gentiles, danger in the city, danger in the wilderness, danger at sea, danger from false brothers; [27] in toil and hardship, through many a sleepless night, in hunger and thirst, often without food, in cold and exposure. [28] And, apart from other things, there is the daily pressure on me of my anxiety for all the churches. (2 Corinthians 11:23–28 ESV)

I don't know even what to make of Paul not listing it here... except maybe "and hardship" OR the fact that he was going to list a few sections later in the letter.

I have thought about Paul's thorn for years... it is quite a section.

It says something very interesting about God's sovereignty

The thorn WAS given to Paul. And I think Paul has God in mind here. Even though the thorn is personified as "a messenger of Satan to harass me".... it has a purpose "to keep me from becoming conceited".

Paul knew WHO had the power to remove it:

[8] Three times I pleaded with the Lord about this, that it should leave me. (2 Corinthians 12:8 ESV)

Is there a difference in what God allows and what God gives? Again, these are things for a book... even though I don't think you can adequately KNOW... that kind of control is beyond us.

These are things that trip up the so called intellectuals of our species... because God resists the proud.  It is by God's sheer grace that men of supreme brain power bend their knee in humility. In fact, it is one of God's great miracles. At some point a man understands that the very existence of the very logic that he is using comes from God, the breath he is breathing comes from God, the language he formulates his arguments with comes from God, the engineering in the finger that he points at God in anger comes from God, his outrage at injustice comes from God. And in a moment of weakness, he comes to a truth. God is at the very end of where his brain power finally runs out... and God is not there saying, 'I told you so'... God is there with love and forgiveness. God is also there to show this now humble man brand new discoveries that were always outside his reach while he stubbornly held onto his pride.

Paul had been there... and he was in danger of returning to that state of conceit... so God gave him a 'thorn'.

I have for many years thought of this as a physical ailment- mainly his eyesight. And it could be something leftover from his conversion... when he was struck blind. And his prayers might seem partially fulfilled maybe?

As I have gotten older, I have become less persuaded that this thorn was a physical ailment.

The Scripture is GENUIS not to specify what it was.

My guess is that the original readers knew more of this malady that we do....  My latest theory is that this is the first 'sub-tweet' in Biblical history. My latest theory is that this was a person.... maybe a false teacher that was cleaning Paul's clock in public debates, and maybe someone whose writings vilified Paul, questioned his authority, attacked his reputation, and was persuasive in style and substance. The fact that we DON"T know who this is, is a testament to God's modus operandi... no long lasting honor for the enemies of God's children.

It actually is a passage in Numbers that gave me reason to think of this as a stubborn enemy:
But if you do not drive out the inhabitants of the land from before you, then those of them whom you let remain shall be as barbs in your eyes and thorns in your sides, and they shall trouble you in the land where you dwell. (Numbers 33:55)

There are things in our life that God gives us that are nagging, harassing unpleasantries, that we plead with Him to remove.... but He says NO...and we can either accept that and glory in it... or we can grumble our joy away... eroding our trust in Him as a loving Father. Furthermore, if we can shine a bright light on Christ even in the midst of these harassments... we magnify the Lord in bright colors and displays of grandeur.

My prayer is that we too can be encouraged during nagging, satanic harassment that God is using it for His good purpose.

[9] But he said to me, “My grace is sufficient for you, for my power is made perfect in weakness.” Therefore I will boast all the more gladly of my weaknesses, so that the power of Christ may rest upon me. [10] For the sake of Christ, then, I am content with weaknesses, insults, hardships, persecutions, and calamities. For when I am weak, then I am strong. (2 Corinthians 12:9–10 ESV)

This may be the greatest verse in Scripture as it relates to Godly encouragement!

And that is the 'Point' of the thorn.