It's Really NOT a Re-Match 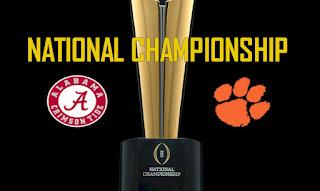 I have actually had a good year of predicting the outcome of games this season. Though NO ONE ever really knows what my happen in a game. Two teams like Clemson and Alabama could play 10 times with 10 totally different scores and maybe a 5-5 or 6-4 split.

But it is a mistake to spend a lot of time on last year;s game as a predictor of this year's game.

With the news of Coach Sark calling his first Alabama game- it totally changes the dynamic (http://www.espn.com/college-football/story/_/id/18394667/lane-kiffin-not-coach-offense-alabama-crimson-tide-title-game)

So what variables need to be considered that may not be addressed in all the super-hype this week.

Weather: No factor as far as long range forecast is concerned....

The narrative this week is actually helping Alabama, it is actually putting Clemson as the favorite to win even though the line is Bama.

It is interesting to note that Jeremy Pruitt has had as much success as anyone versus the Clemson offense, including the 2013 win over Clemson at Fla State, and the 2014 win over Clemson in 2014.

Wow- what a development. No clue how that turns out, but Randy Sanders won a National Championship at Tennessee as a play caller when David Cutcliffe left for Ole Miss in 1999.

A lot of the media is making a lot of Jalen Hurts as an Alabama liability. I actually count him as an asset.

Mistakes by Minkah Fitzpatrick/Defense in 2016.

Last year's game was highlighted by Minkah Fitzpatrick losing on a some deep verticals and a double move. In fact, though Clemson did roll up a lot of yardage in last year's game, it was a lot of mistakes on the Bama defense.

First of all, I have a lot of love and respect for Dabo Sweeny, Lemanski Hall, Dan Brooks, Thad Turnipseed, Danny Pearman, Woody McCorvey, Marion Hobby, Robbie Caldwell, Brad Scott, and many others.If Clemson wins, I will have a lot of close friends to congratulate and I will be happy for them.

Which Clemson team shows up?

If there is one problem with winning a semi-final game with relative ease, it can create problems in the next game when adversity sets in. I think it actually hurt Alabama to win easy last season vs. Mich. State. When Clemson is on, they are capable of scorching Alabama. But they can run hot and cold... especially their defense.

Clemson plays an interesting style on both sides.. it is a risk taking offense and defense. When it works, it cause VERY negative plays for the opponent...but the exotic blitz schemes and stunts can give up explosive plays.

If one team or the other gets up early, the opposing fans don't need to lose hope- this type of game can have big swings.

Dabo's Turn for the Trickeration:

Both teams will throw their gadgets in- Alabama ran a reverse early last year. But I think Dabo will want to do his own version of an 'onside kick' to return the favor.

I think BOTH defenses will play better this season and teams will have to drive for scores. I predict the final will be 24 to 21 not 45-40.

I do think that in the right/wrong set of circumstances, you could see either team with a huge halftime lead- probably because of turnovers.

OJ had a big pass catching game last year, mostly by Clemson errors... bit he had a poor blocking game. There were a few inside runs where he overran the downhill backer.  I think he is a much better blocker.

Clemson is very well known in coaching circles for calling plays after the DC has signaled in the defense. I have heard arguments on who is better at that Auburn or Clemson and it is always a fight....I don't like that Pruitt doesn't hide his signals.

If these guys have big plays, it could be a great win for Alabama.

I have a working theory that Saban called the Washington game with Clemson in mind. Once he saw the Husky offense was not a threat, he put the clamps on Kiffin. It didn't help that Hurts almost threw a pick on his first 3 level read.

Here is how I see it:

Alabama's defense will be much better and if they create turnovers, it could be  damaging to Clemson. They know that turnovers hurt them this year, so it could be psychologically damaging.

Alabama will run the ball on Clemson and it will be because of Hurts. Who would you rather have right now? Hurts or Coker? I would take Hurts.

Also- it will be Josh Jacobs with the big game in the 4th quarter.... not Scarborough.

Adam Griffith will have to make his kicks.

If either QB gets hurt.... the other team will win.