Bama vs LSU: Take Your Heart Medicine- The End Will Be Wild 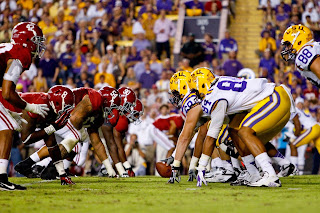 Football is such a strange game... you have to keep in mind "it's all about the match-ups".

Some teams and schemes are just a strange fit.

Every play becomes a fascinating combination of variables: Down/ Distance/ Field Position/ Momentum/ Fatigue/Belief/Trust/ Weather/ Noise/ and the crazy physics of a football (velocity, angular momentum, and gravity)....

To predict outcomes is (almost) ludicrous.... especially in the stranger brew of night time SEC football.

But I have spent some time analyzing both teams... and here is my analysis...

Having two weeks to prepare for a big game will never be neutral.... it will be evident EARLY ON if the off week was good or bad for both teams. My guess is that both teams will be rested and ready to go.

The bigger issue of the off week is prep time for coaches.... I believe you will see very detailed game plans put in place from both coaching staffs. These guys know each other very well. The only risk you have at times is a potential to do too much scheme wise and have mess-ups trying to execute with speed and a lack of confusion.

My biggest concern is how Alabama adjusts to the loss of Eddie Jackson- no doubt the athletes there will be phenomenal...but I expect LSU to find out quickly if the safety can fill and tackle and, if he does that well, how susceptible is he to play action?

The good news for Alabama is that they have had two weeks to work on both of those. They can do some safety swapping based on formation and can have built in coverage help.

Make no mistake... losing Eddie was a big loss for this team. A lot of guys will have to step up to try and fill that void.

I wanted to mention a little bit about Texas A&M... they had a terrific game plan vs Alabama, and had it not been for great offensive execution and the defensive TD- that game was going to be a nail biter.

I was very surprised to see the Aggies play almost the whole game with two high safeties and only 6 run defenders. But after some thinking it later made sense. If Texas A&M made Alabama run the ball, they hoped their two outstanding DE's would make enough good plays to prevent long drives for points. That slows the game down, holds down scoring, and has it tight in the 4th quarter and pressure begins to mount on an undefeated #1 team.

The fans don't help here BTW- there were some in my area that were almost depressed or either angry at Kiffin for struggling in the red zone (the murmuring sucks the energy out of the home team noise advantage)...but that's how A&M played it.. Once the field gets constricted a 6 man box becomes an 8 man box because of the depth of the safeties. This is the bend but don't break effect.

What hurt the Aggies was that Alabama executed their run game VERY well, taking the DE's out of the game by reading them instead of blocking them.

WHY SATURDAY NIGHT WILL BE WILD

I predict LSU will not follow the Aggie defensive plan. I predict you will see a run heavy box and Cover 1 and even some 0.... it will be a full pressure package hoping that attack, intensity, and noise will make it hard on the OL to protect.

LSU believes they have the athletes on defense to run with Alabama. 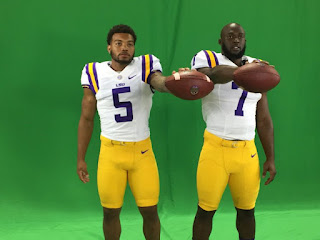 The problem with that attack is that it becomes 'feast or famine'- you can create negative plays and turnovers... but the offensive good plays aren't 1st downs..they are TD's.

I think LSU will be able to do the same... a lot of 3 and outs... but also a lot of explosive plays. The reason Guice #5 scares me more that Fournette #7 is his ability to bounce wide with quickness.

This will NOT be a 9-6 knuckle grinding game.... this will be a relatively high scoring game.

And will come down to mistakes.....

WHY I GIVE BAMA THE EDGE

The QB spot is the only real difference. And I hate to create early controversy for the Iron Bowl... it is the same in that game.

A healthy Jalen Hurts..... will be the difference in Baton Rouge and the Iron Bowl. Hard to believe I wrote that regarding a true freshman.

His ability to run puts that one more element in that attack that finally stretches the defense too thin.

A mobile QB tires down a defense...

I give Saban, Kiffin, and Sarkisian HUGE props for adding zone read and RPO's in such an effective way to this offense.

I see two explosive plays by Ridley and one or two by Stewart as being the difference.

But there will be negative plays and some 3 and out drives.... will the team stay focused and execute when the momentum is opposite their direction? It will be a GREAT test...  one a championship team must weather if they are to accomplish their goals.

Bama's biggest weakness is consistency in FG kicking versus the two major teams left on their schedule... That guy needs all the support and encouragement we can give him. And he is our guy regardless.

So here is how I call it:

Both games will be back and forth until the 2nd half.... this team will have to compete...no one is going to give it to them.

The fans in Crimson are pretty spoiled..... try and enjoy the journey....