There is something really special about the Alabama-Tennessee football game, traditionally known as the 3rd Saturday of October ( yes, I know it isn’t ALWAYS that). This game fits into the pageantry of the fall- when the leaves turn color, they seem to display orange and crimson as decorations on this great event. A cool crisp autumn day with an azure sky helps make this as good as it gets in college football.

Now that the broadcast colors are so good- I think it would be cool to have both teams wear their home colors in a game one day.

I wanted to reflect on why this game is special to me.

When I got to Alabama in the Fall of ’82, I discovered quickly that Tennessee week was very important to Coach Bryant. Back then, it was a very classy rivalry. Coach Bryant had great reverence for General Neyland and spoke fondly of him on many occasions. Coach Bryant’s emphasis on special teams had a lot to do with General Neyland. I also came to learn that a football catch-phrase “Riverside” (used to tell the offense and defense to change directions and begin going the other way) came from Coach Neyland and was in reference to the Tennessee river that flowed next to the practice fields.


It was also in the Fall of ’82 that my connections to Tennessee began. As I went to Alabama, my high school coach, David Cutcliffe, took advantage of a risky opportunity to join Coach Fulmer’s staff in Knoxville. It wasn’t surprising to me when I learned that Coach Cutcliffe had been instrumental in helping with a game plan that allowed Tennessee to upset Alabama in Birmingham the next season.


When I started coaching in the fall of 1991, it was Coach Cutcliffe who took great interest and time to help me. From 1993 until 1998, I spent at least a week in Knoxville during either spring practice or summer camp and had the privilege of attending coaches meetings and watching hours of game film. Coach Cutcliffe began teaching me pass concepts and his staff helped me improve our offensive system and pass protections.


The staff and atmosphere in Knoxville during those years was full of energy and personal warmth. When you consider Coach Fulmer's and his staff in those days.. It is a true ‘who’s who’ in college coaching: John Chavis, David Cutcliffe, Randy Sanders, Woody McCorvey, Trooper Taylor, Dan Brooks, Pat Washington, and I also loved talking to Condredge Holloway.


It wasn’t long before my friends and family weren’t real happy with my appreciation of UT orange. I was working their camps, showing their cut-up videos to teach our offense, and was telling folks about being in meetings with Coach Cut and Peyton Manning.

And Tennessee was having its way with Alabama during that time.


I always found it interesting that we won our 1st state championship at Briarwood(1998 and 1999) about the time that UT won the National Championship in 1999. Coach Cut left for Ole Miss and my time in Knoxville was ending.


t wasn’t long after that that the rivalry turned bitter. I know some inside information about the Eric Locke recruiting saga that was the seeds of that anger. It was unfortunate that fans and talk shows spun that up and for a time, it was harder to tell who Alabama fans hated more… Auburn or UT. 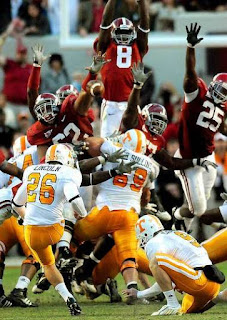 Any research on the series shows long streaks:

and currently, Alabama holds a 9 game streak going into this Saturday.
Who could ever forget the 1990 game in Knoxville when Tennessee was set to win it with a FG. It was a 6-6 tie with only 1:45 left. Alabama blocked the kick and the ball bounced in such a way, that it was Philip Doyle kicking Bama to the 9-6 win on a 48 yard FG as time expired.

Another memorable FG block in 2009 when Mt Cody saved the unbeaten Tide against the Vols coached by Lane Kiffin. 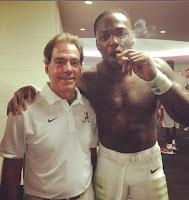 In the 1950's, Coach Jim Goostree began the after game cigar.

Since, 2005, Alabama self-reports a violation to the NCAA of their tobacco ban if the Tide wins the game.

ANALYSIS OF THIS YEAR'S GAME 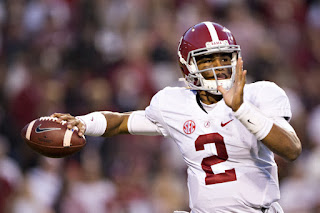 I have watched both teams as close as a TV fan can. I was really concerned about this game because of how tough Tennessee played in Tuscaloosa last year.

For some reason , UT hasn't been dominant- though their 'will to win' in unquestioned. They have fought back from big deficits all year.

I think the weakness in UT is their offensive line. And while the opponent's defensive line is fresh, UT struggles to move the ball.

I think the big comebacks are a result of good scheme adjustments, and the defenses getting fatigued as the games move on. I'm also still convinced that signal stealing is an unrecognized factor in SEC games.

For Tennessee to win, the Alabama offense will have to turn the ball over. Is there a game in the future where Jalen Hurts looks like a freshman QB? If it were to happen this week, the crowd noise and momentum could be huge.

WHY I PICK BAMA

I think Tennessee is a beat up team right now. I think their injuries and lack of depth puts them at a big disadvantage.

WHY I THINK IT DOESN'T MATTER

My boldest prediction is that this game is meaningless... I expect both of these teams to play again on December 3rd in Atlanta with the winner getting a bid to the playoffs.

As a fan, I'm hoping Alabama has to self-report TWO NCAA violations this year.