I don't post much on Alabama football. But it has been a lot of fun to watch this team develop this season. This is, from the beginning of the fall until now, the most improved team I have watched in the Nick Saban era.

It is a joy to me to be an Alabama fan because of the traditions that this program has. Yes, I'm spoiled because of the wins... no doubt about it. But I love the way this program does it. Classic uniforms, high expectations, and this team represents class both on and off the field.


This Alabama team has a feel similar to the 1992 Alabama team which used a ferocious defensive line to totally stifle their opponents. Under Coach Saban, Alabama has been remarkable on defense- but this year has shown a step up to the challenges that  current offenses present.

I am an offensive minded football coach- but I KNOW that a great defense will always beat a great offense. The rise of spread offenses, tempo, and complex concept passing schemes are challenging defensive coaches more that anytime in football history.

But Alabama has solved some of the problems that these teams bring.... especially how to combat fatigue and personnel mismatches.

My guess is that the very first time Coach Saban was stung at Alabama was the La Monroe loss his first season. He clearly had the better personnel, except on the apex defender versus the #3 receiver.

If you have a least 1 bad match-up... all you want to do as a coordinator is tire the defense down and slow the pass rush enough to play backyard football with that bad match-up or a Qb run versus cover 2 man.

Alabama has countered the spread by matching every move.... bold substitutions, a plethora of pass rushers, and brilliant disguising of the coverage... including multiple combo/match concepts when the formations go 3x1.

I also have to mention the decision to 'stop the rush and jump up in the air versus the quick passing game'  has taken away a lot of the hot throws that offenses use. I have never seen more batted balls as I have this season.

When I think of the 1992 team- I can't help but do some comparison regarding Jay Barker and Jake Coker. Both guys are asked to do similar things in the offense.

The 1992 team had to grind it out to get to the National title game.... a stubborn Auburn team and talented Florida team demanded dramatic moments and Antonio Langham stepped in and delivered.

Don't be surprised to see the same effort needed- Auburn has too much competitive pride to lay down at home and Jim McElwain will feel like a guy playing with house money and inside information if Alabama wins their way to the SEC championship game.

A lot has to happen between now and then..... and just making the final four is an honor. It's like basketball in that to get in is worthy of glory and all 4 teams can beat any of the others on any given day. That what semi-finals are all about!

But what makes me take time to write about this isn't the record or wins...

This Alabama team has some really good guys.

Did you see what Leonard Fournette (also a great guy) said about the Alabama front 7?

"They came out to play. I can't take nothing from their front seven, they're a great group of guys, and even better than  people. After the game gave us words of encouragement, 'stay focused.' Overall, they had a great team effort."

Derrick Henry was having a monster game — he finished with 204 yards, his third 200-yard game in his past four outings — and he pushed his way through the crowd to get to Wilson. He shouted, “Praying for you, dog, praying for you,” before turning and making his way back down the bench.

And did you see how Kenyan Drake responded to another injury that will make him miss some of these crucial games? 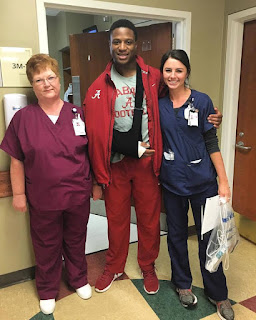 Big thanks to these wonderful women, the other nurses who took care of me overnight and the doctors who performed my surgery. I'm feeling so much better already. Also thanks again for all the people who called, texted and for the prayers and well wishes via social media. Much love ‪#‎rolltide‬


Good morning everyone. Just wanted to

personally say that I really appreciate all the

love and support throughout this process of my

career. Blessed to be a part of Bama Nation

and the support of the best fans in the country!

Finally- there was a a few Tide players who went to the Tuscaloosa VA for Veteran's Day.

There is a great video of them singing "This little light of mine" to the vets.

I am not saying that UA players are all angels..and I root for players and coaches in all programs who demonstrate class and laudable character.

But in the end... I love Alabama, because those things are important at Alabama.  No, it is not enough to win... it has to be done in a certain way. Players are burdened with a tradition of winning with class.

And in the end, I will be proud of this team... ring or not.

And I hope to enjoy this latest era of great memories... and try not to take them for granted.

Any team can just about beat any team in modern day college football.....

and if those 4 teams are there- that will be a fun thing to watch. Any of those teams could win it.