The Right of the Owner and the Appeal of our Arguments 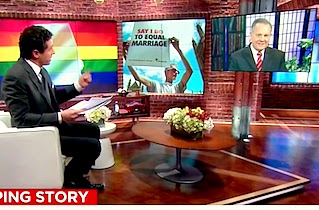 In my lifetime, we have seen the ebb and flow of argumentation and the swing of momentum among societal attitudes in areas of the social norms of morality. How do we judge right and wrong? Is there a consensus of virtue?


The study of these trends are fascinating: women's issues, civil rights, medical ethics, abortion, the legalization of marijuana, 'just' wars, economic equality, and most recently the definition of marriage issues.

As we see poll after poll, trends of momentum, and the wrestling of a nation over 'justice' and 'protection' in 'issues'- it is the major shift that often goes unnoticed.

As an Alabamian, I have watched with fascination the comparison and posturing of two of these important issues. Is the debate over so-called same sex marriage a civil rights issue?

What sparked my brain enough to finally write about this came from an interview between Judge Roy Moore and CNN news anchor, Chris Cuomo, on Feb. 12, 2015.

Just a google search of that debate gives you the flavor of headlines that summarize how the interview went according to popular opinion:


As I watched a replay of the almost 30 minute debate (extraordinary for TV), I was impressed by both men and their ability to draw on important distinctions of their views.

Transcript provided (CNN)
MOORE: No, I believe that's a matter of law because our rights contained in the bill of rights do not come from the Constitution; they come from God. It's clearly stated -- CUOMO: Our laws do not come from God, Your Honor, and you know that. They come from man. MOORE: Well, let me ask you one question. Let me ask you one question, Chris. Is the Declaration of Independence law? CUOMO: You would call it organic law as a basis for future laws off of it? MOORE: I would call it the organic law because the United States code calls it organic law. It is organic law because the law of this country calls it the organic law of our country means where our rights come from. And if they come from there, men can't take -- CUOMO: Our rights do not come from God. That's your faith. That's my faith. But that's not our country. Our laws come from collective agreement and compromise. MOORE: It's not a matter of faith, sir; it's a matter of organic law, which states we hold these truths to be self-evident that all men are held equal and endowed by their creator with certain inalienable rights, that among these are life, liberty, and the pursuit of happiness. And the only role of government is stated in the next sentence, is to secure those rights for us. When government starts taking those rights away from us, then it's not securing it for us; it is violating the whole purpose of government.

See the fundamental difference? Who is in charge of the final decision?

Now this key shift does not help me 'win' the argument... in fact, any study of current social trends will explain why evangelicals are 'losing' the popular consent. And to be honest, our inability to argue from the key difference ourselves hurts us in the mainstream of discourse.

The key demographic is who is the final judge in these matters?

A growing number of people will say 'the consensus of the republic'.

Christians will say 'the God of the Bible'.

We were fortunate that for many years, the two were hand in hand.. there was enough of a Christian consensus and the Judeo-Christian world view that decisions were made under the constraints that Biblical morality was a foundational aspect of our law and governance.

The Bible is not held in honor as our rule and authority and all religion has been relegated to the private sphere with no right to speak in the public square.

When the Supreme Court made the decision to sever Christianity from the government in removing prayer and the 10 Commandments in the 60's... the slow drift towards a utilitarian society began.

The Supreme Religion of our nation is Secularism whose final judge and owner is MAN. The fabric from which decisions are made is with the majority - the so called 51%... (however, I believe it is actually within the power of a smaller group of 'elites').

The owner now of our rights as a nation is MAN and it has been that way for a long time.

There is a fundamental difference in making decisions from those who see a higher law than Man's law.

Take for example- the comparison of the 1960's civil rights issues as further healing from the sin of the slave trade and the battle of same sex issues.

In God's law- Race is a sacred gift from God and sexuality is a gift from the Creator as well.

In Biblical terms-  it was a sin to recognize a PECKING ORDER of segregation when it came to a human beings race or ethnicity. We are all descendants of Adam...there is but one 'race'.

Yes, there were some who TRIED to argue the opposite...but the Bible always does a great job in correcting errors in interpretation.

There are great translations in the language of the people...read it for yourself- racism and slavery are NOT in God's plan for humanity.

By this same 'authority' sex is a gift from God. We are to experience it as He has designed it.

It is a sin to transgress the gift of sexuality as the Owner defines it.

This doesn't mean that we may have desires to violate this God given gift... it is what we do with those desires and our response to the call of the gospel of Christ.

The same Bible (taken as a whole and in the light of the gospel) compels us to reject racism and reject homosexuality under the same principle- God is the Owner and He has communicated clearly how we are to act.

Sometimes, it looks like, on the surface- the views are inconsistent. We see an example of this in pro-life issues. The same Authority has puzzled non-believers for years.... How can a Christian be pro-life and pro-death penalty at the same time?

But both stances are under the same principle- life is sacred- it cannot be taken except in instances where God has commanded it. Capital punishment is God's law- showing that life is sacred. If you take a human life in a pre-meditated manner, you will receive the foremost punishment for such an act.

Life is sacred- race is sacred- sexuality is sacred. God owns these and we are not to arbitrarily redefine His will on these issues.

It is God who makes the rules on these issues... and man is rarely right in his personal choice.

There are those who are critical of the Scriptures or fight over interpretation- but any honest reader will see that the Bible speaks with great clarity when reading it in context and in the grand light of the gospel story.

I suspect the Supreme Court will rule in favor of redefining the definition of marriage this summer.

It will cause a lot of celebration... and someone will say "now it is legal and morally right".

And Bible believing Christians will say... it may be legal..but man's decision does not trump God's revelation.

And Bible believing Christians will be relegated to the mockery of current culture because we debate macro-evolution, man made climate change, the legalization of marijuana,  and abortion on demand.

At the same time-  we MUST be consistent:

Do we denounce, in love,  ALL sexual immorality including pornography and adultery?
Are we willing to speak the truth in love and understanding regarding the struggle of sin?
Are we willing to minister to those who suffer the natural consequences of defying God's moral law?
Are we living out the call of Jesus to stand for justice, care for the poor, the widow, and the orphan?
Are we willing to embrace that the cross of Christ covers all sin for those who repent and believe in the atoning death of Jesus?

A FINAL-AND MAYBE MOST IMPORTANT NOTE:

None of this should leave Christians wringing our hands in melodramatic whining.

I have always found it interesting what the Apostle Paul wrote as Christianity was a small speck of influence in a very pagan society:

I wrote to you in my letter not to associate with sexually immoral people—not at all meaning the sexually immoral of this world, or the greedy and swindlers, or idolaters, since then you would need to go out of the world. But now I am writing to you not to associate with anyone who bears the name of brother if he is guilty of sexual immorality or greed, or is an idolater, reviler, drunkard, or swindler—not even to eat with such a one. For what have I to do with judging outsiders? Is it not those inside the church whom you are to judge? God judges those outside. “Purge the evil person from among you.” (1 Corinthians 5:9-13 ESV)

This verse has always instructed me to be loving to those who are receiving the gospel as a call for salvation... love them in patience and understanding.

I need to be more ruthless with me.. the one who should know better and encourage my fellow believers who bear the name of Christ- for His sake- to live under His ownership of our lives.

Who makes the supreme decisions in your life?

I expect there to be growing antagonism towards those who seek to live in a humble obedience to the gospel of Jesus Christ as contained in the Scriptures.

We may find ourselves giving a simple reply one day- one that also has deep roots in history past:

The magistrates may say: "Do you or do you not repudiate your books and the errors which they contain?"

And we will reply as Martin Luther replied:

"'Since then your imperial majesty and your lordships demand a simple answer, I will give you one without teeth and without horns. Unless I am convicted of error by the testimony of Scripture or by manifest evidence...I cannot and will not retract, for we must never act contrary to our conscience....Here I stand. God help me! Amen!"
Posted by Jayopsis at 2/13/2015 03:08:00 PM